Three days remain for the Turkey trip. I fought a losing battle to keep my eyes open on the bus today. As rich as this tour has been, I’ll be glad to sleep in the same bed for more than two nights –and even happier to see my family! We rendezvous in London before catching the train to Scotland.

Highlights from my second week: 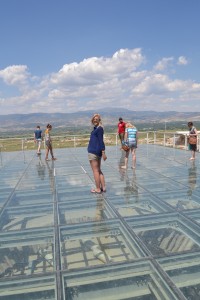 The ruins in Laodicea included this spectacular floor — spectacle-like, in fact, because the tiles revealed the sand and stone below.

Part of the structure rested on one of the ancient stone arches! We trusted the Romans knew their engineering.

Despite the logic that the site curators wouldn’t have installed a feature that might send visitors plummeting to misery below, walking across the transparent tiles cost me an act of will. I sympathize now with dogs who refuse to cross grates and gutters.

Then Addison noticed our levitating shadows. The rounded silhouettes floated on the sand, dismal and diminutive with nothing to anchor them.

Hearkening back to four-square games at recess, a quartet of girls aligned their shadows within the grid. By then, our trepidation had turned to fancy. In the end, our guide had to chase us away to the next site. 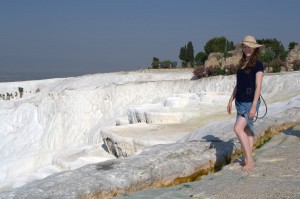 Hierapolis, the “holy city,” floods its white terraces regularly to maintain their hue.

We waded through low pools of water –now cool, then warm– along the lone slope still open to public trespass. Tourists in various states of undress flooded the area.

In the sunlight, the calcium carbonate hardens into sharp whorls and ridges, but it dissolves into velvety sand in the shadows. I buried my toes in the silt and imagined snow, Mars — anything but Turkey in May. My thanks to last year’s trip, for their enchanting photos of this place. It didn’t disappoint!

Next we explored Aphrodisias: 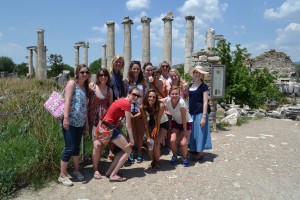 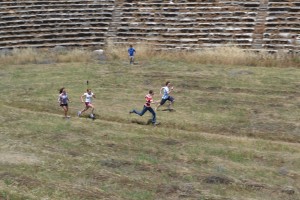 There we upheld two traditions from last year: photographing the ladies before the Temple of Aphrodite, and racing in the stadium under the blazing sun. Cheers echoed in stands overgrown with wheat. 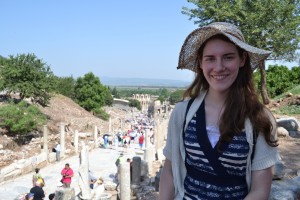 The city of Ephesus! So weathy, they declined government assistance for a rebuilding project after a disaster. Our guide assured us we visited on a relatively cool, sparsely crowded day. I’ll have to take his word for it.

In the distance behind me, you can glimpse an innovation on pyramids and elaborately carved boxes: a library mausoleum! The intricate facade dominates the vista. Other notable landmarks include the tomb of Cleopatra’s sister. After allowing her murder, Marc Antony ordered a sarcophagus built to assuage the locals’ consciences.

With the afternoon free in Izmir, a coastal town… 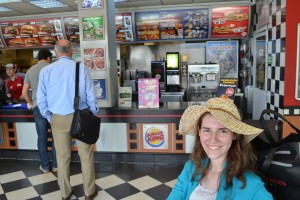 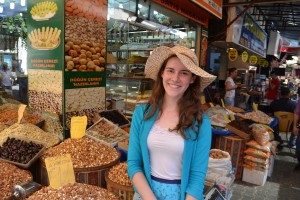 …we began in Burger King and ended in the Bazaar. 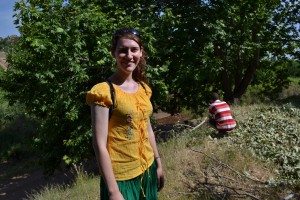 Our guide recounted the story of King Midas for us, with an epilogue new for me: “The sorry king found his cure by bathing in this river!

“You see?” Mehmet smiled. “All the things are happening in Turkey!” Indeed, an astounding number of mythical events claim roots in Turkey, to say nothing of the early church history uncovered here.

I don’t know about cures for gold fever, but we did discover mulberry trees along the riverbank. 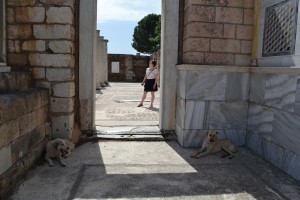 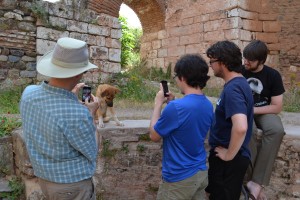 A better tourist would remember the names of these sites, but I can only narrow them down to Sardis, Thyatira, or Bergama. On the left, you see the modern Turkey’s answer to the Sphinx Gate; on the right, observe the country’s greatest attraction. 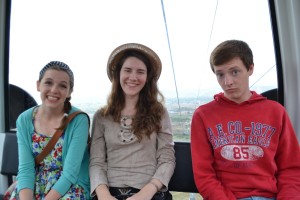 The Pergamum Acropolis no longer permits buses to tow tourists to the peak, because the road rolls right over more artifacts buried in the mountainside. So we traded a perilous thrill ride for sedate cable cars.

Mike (right) did his best to make up for it: “Imagine if the cable snapped! Imagine if we ran out of oxygen! What would happen if we all stood on one side of the car?”

Somehow we survived to see the temple, which boasts a few, doubtless standard, feats of Roman engineering. 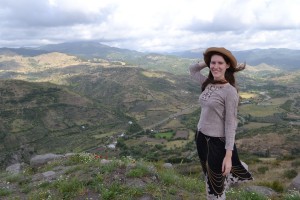 First, an aqueduct spanned the valley behind me. It relied on a trick of Physics to carry water uphill.

The Romans faced another difficulty in constructing the temple: The mountain slope wouldn’t support a large foundation. Solution: They built half the temple on the mountain…

…and the other half on a system of arches.

They dedicated the temple both to Emperor Trajan, the original honoree, and Emperor Hadrian, who permitted the project’s completion. 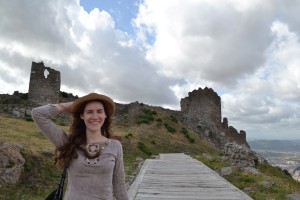 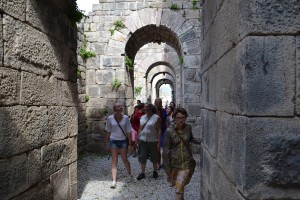 That afternoon, we visited a little-known city called Troy. 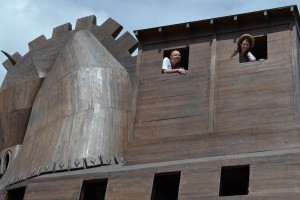 Given how little of import happened there, you may be surprised that an enterprising German named Schliemann dedicated his life to proving that the hitherto mythological setting existed in reality.

Although archaeologists honor his intentions, they wince at his tactics: Schliemann literally bulldozed a ditch through the site. He did uncover a treasury and validate a poet’s scribbling on the subject, but he failed to note that the site hosts nine separate settlements. The oldest dates back 3,000 years. The three newest include Roman Troy, Hellenistic Troy, and Hector’s Troy.

We dug up an old poem for the occasion and heard Josh recite it in Latin. 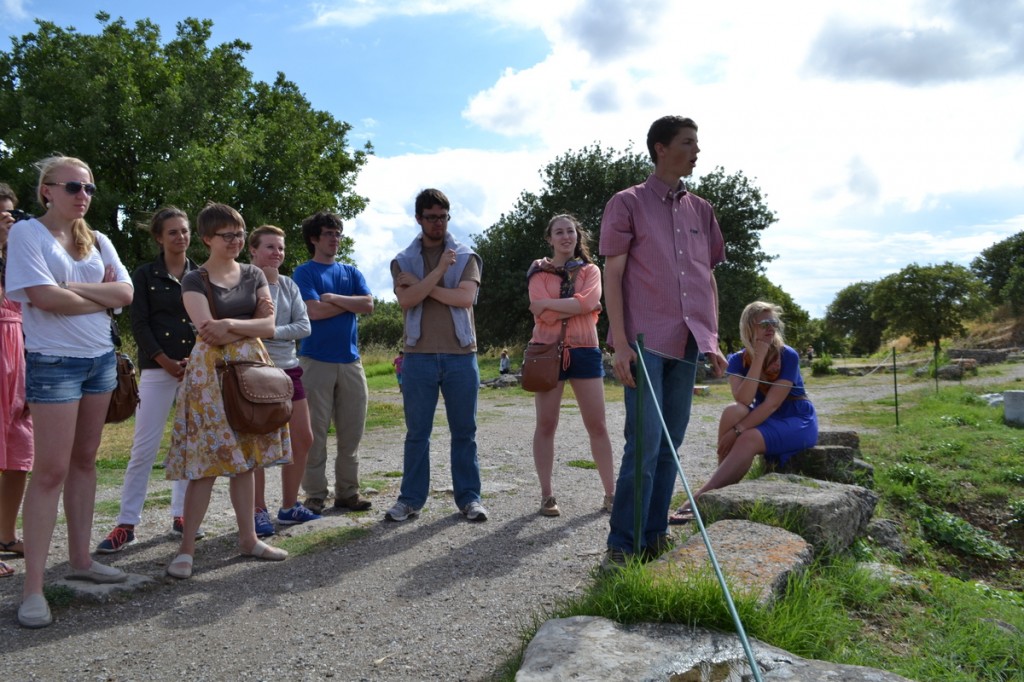