Peace Corps doesn’t stint in girding trainees for living life in the country with no corrals, no bumpers, no training wheels.

That included showering us with handbooks and booklets, packets and pamphlets: from safety and security, medical, community development, policies and procedures… Every time another stack circulated, grumbling would arise: ‘How are we going to carry all this to site?’ ‘I’m gonna have to hire a truck for my extra baggage.’

If you recall from my triumphant departure post, I had squished the sum of my possessions into two backpacks. I pride myself more than is merited on traveling with as few bags as possible–but this time, it wasn’t to be.

I cracked and bought a duffel bag. It was some consolation that a third piece of luggage would doubtless come in handy if I were to realize my visions of holiday hiking trips. Even better, the suitcase sufficed for piling in everything Pre-Serving Training had loaded us.

Everything? No, the stacks of books weighed little in comparison with the intangible gifts that came full circle in my final week at Bundu. 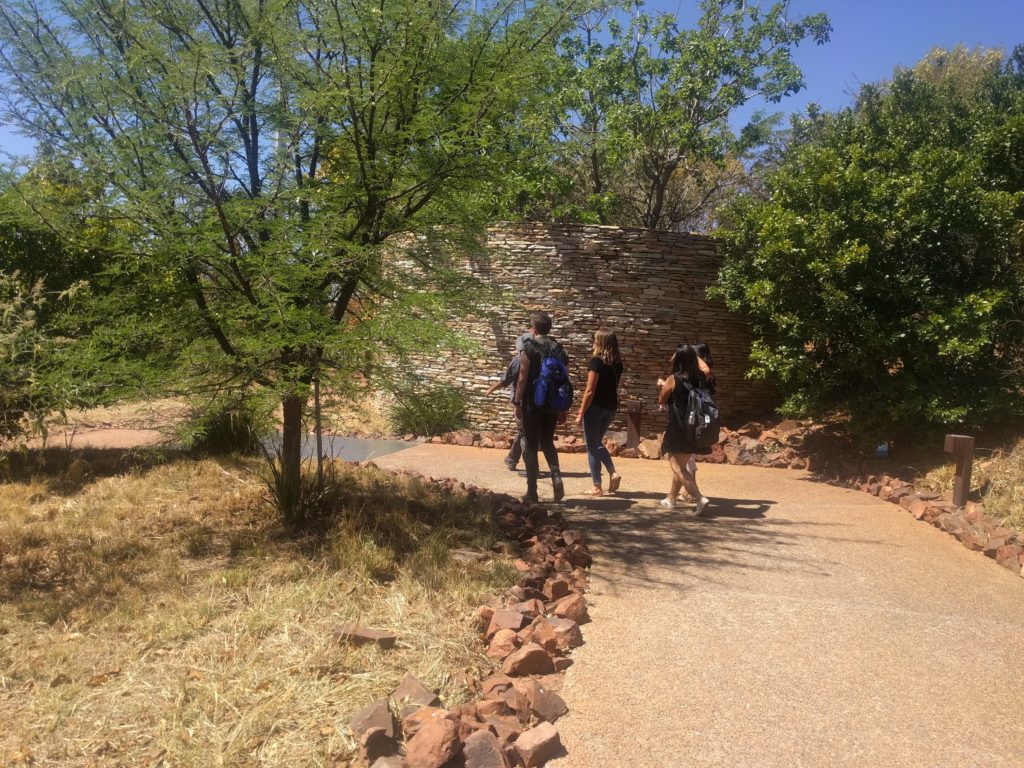 Most of us agreed this was the pinnacle of our museum tours: Freedom Park in Pretoria

No one knew what to expect while we idled in the parking lot, waiting for our entrance tickets. “My family says it’s a park,” someone offered. “It’s a memorial,” someone else suggested. “I thought it was a museum?”

It was all of these but also none of them: a vast territory housing walls evocative of the U.S. Vietnam Memorial, dedicated reflective spaces, and narrative timelines marked with magic realism. 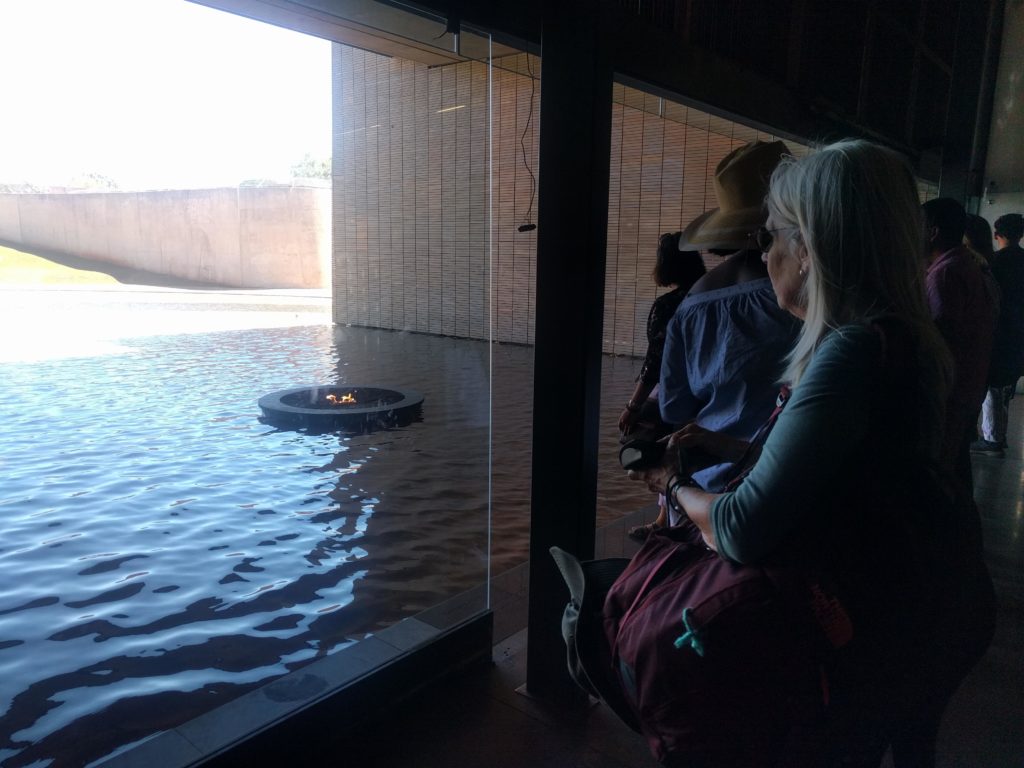 The tour began with a space uniting the four Greek elements: wind, a pool, the hillside, and gas flames

Our guide embraced the controversies that sprang from memorializing what some call a civil war in a country now united. “We’re not a war memorial,” he pronounced in defending one area that refused to include the name of Afrikaner soldiers involved in the conflict. Then, when we passed to another space, he readily acknowledged: “…but here, we are functioning as a war memorial.” 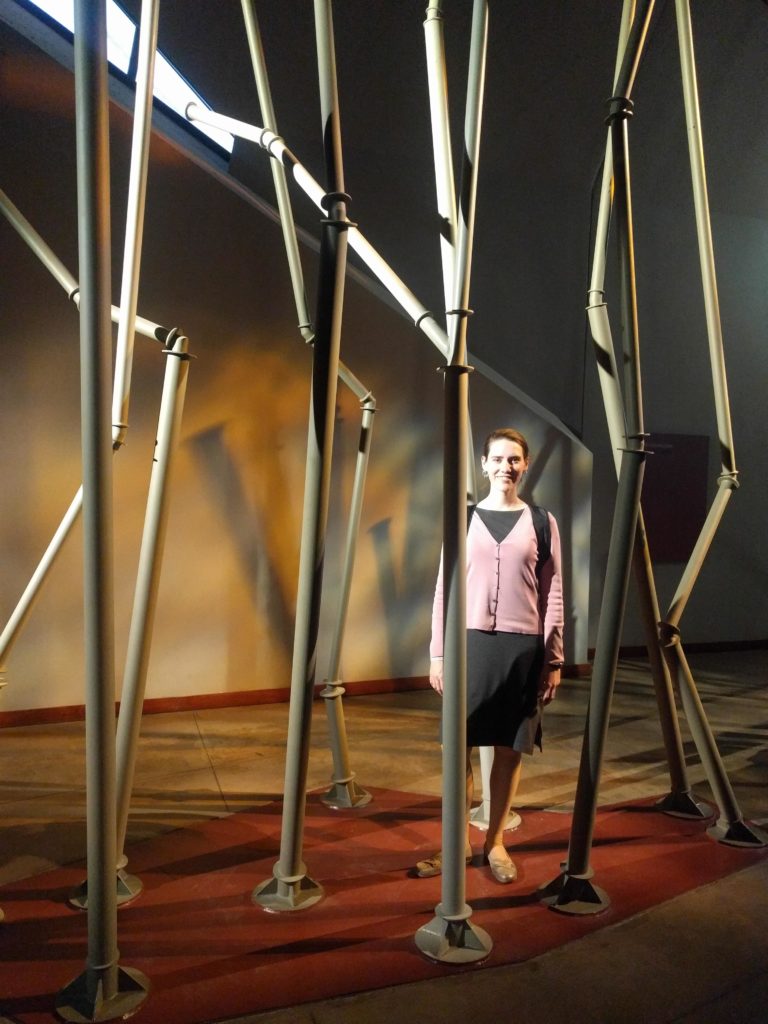 From the reeds sprang humankind, according to an African creation myth

Although the schedule demanded we race through the indoor museum, there was enough time to notice how skillfully the exhibits wove together the threads of South Africa’s history.

We had experienced the major themes in isolation on previous trips, but Freedom Park combined all the details of the Apartheid Museum with the spacious physicality of the Voortrekker Monument.

I marveled afterwards that Freedom Park perfected our introduction to South African history. 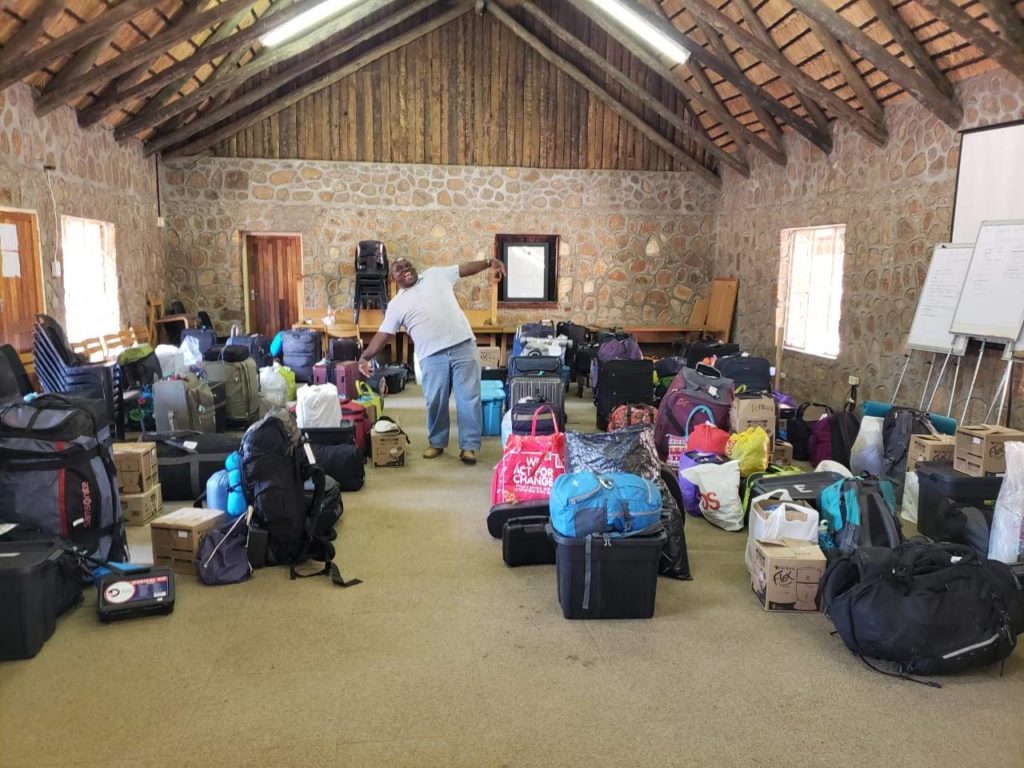 Hardly had we tumbled off the buses, but it was our final weekend with our first families in South Africa.  My uMama outdid herself with a grand good-bye party feast: 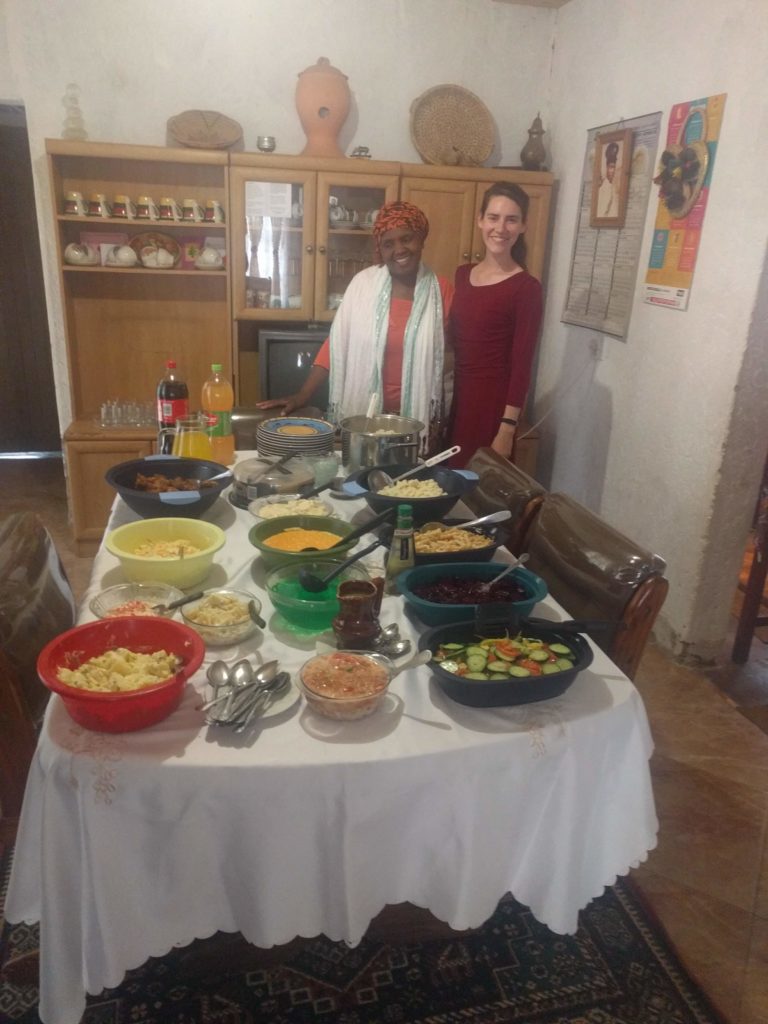 If anything could make me homesick for Bundu, that homemade fried chicken…

Everyone who had known and loved me in Bundu, plus a few people I had never met before, gathered to celebrate over plates heaped with all uMama’s best delicacies: fried chicken and baked pasta, sweet beans and sweet potatoes, potato salad, Greek salad, and fruit salad, with custard and mint jello for dessert. 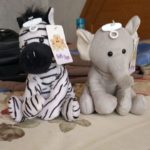 I had stashed gifts chosen for each of my immediate host family members–but not for my Bundu aunt or gogo (grandmother). I was abashed, anxious that it might cast a pall over the party to offend these venerable ladies.

Shyly I delivered each token thanks: a shirt for uBaba, headphones for my tech-savvy host brother, furry friends for my little sisters, and a new set of knives for my very deserving uMama.

Then the Mahlangu family taught me a final lesson in South African community living. For each gift, everyone present thanked me: the actual recipient, but also the aunt, the gogo, the family friends, and even the neighbors–with bright eyes and warm smiles, they multiplied my small gifts to feed the hearts of many.