In All Godly Quietness: USA Visit Via London

If there’s anything Peace Corps service has taught me, it’s the necessity of waiting.

My nature rebels against the humility and simple surrender of acknowledging that further action will avail nothing; the outcome is beyond my power to influence; there’s nothing to do but place my trust in the Lord…and wait.

In some small areas, my expectations have made the adjustment: the taxis to my shopping town, the line at the grocery store, the printers at school. Although service providers here rarely hurry and sometimes acknowledge requests reluctantly, that doesn’t mean they aren’t responding. A patient smile does wonders for my health and theirs.

It’s the big questions – about career, family, and the future – that send me into the wrestling ring with God. As a Christian blogger pointed out, there’s a difference between waiting for something you know will happen (eventually) and waiting when you’re not sure whether it ever will. The Biblical images of sowing and reaping acquire new resonance for me as I wonder when the time invested in these critical areas will begin to bear fruit.

END_OF_DOCUMENT_TOKEN_TO_BE_REPLACED

The trip to Ireland began last summer, as the germ of an idea inspired by my good friend, Sarah. When I heard of her plans to spend a year studying abroad in Northern Ireland, I decided, some how, some way, to visit her.

We met in Dublin, after the saintly Sarah suffered a 4am bus ride down from her home away from home in Londonderry. END_OF_DOCUMENT_TOKEN_TO_BE_REPLACED

After riding the Ring of Kerry, we collapsed in our room at Lar Kinley. I refused to succumb to road weariness for long, though, because dancing awaited me.

Dancing! Irish dancing! Irish music, too, as it turned out. My angelic father accompanied me to a local performance, “Celtic Steps,” starring five musicians and four dancers. Despite the relatively small size, the show impressed with its sheer talent and irrepressible charm. END_OF_DOCUMENT_TOKEN_TO_BE_REPLACED

The Jewel in Ireland’s Crown

Bed & Breakfasts save you money. First, they feed you enough for breakfast and lunch. Second, the good ones double as travel agents.

Thanks to Fernroyd‘s hosts in Cork, Avril and Tony, we abandoned our plan of traveling the length of Ireland to visit Derry and instead skipped off for a two-day detour to Killarney END_OF_DOCUMENT_TOKEN_TO_BE_REPLACED

We Had a Great Craic

After a long weekend on the southern coast, we are back in Dublin. No update today because we stayed out late at a pub…playing a quiz game. Stay tuned for the Ring of Kerry and Celtic Steps.

Photo of the Day: Killarney 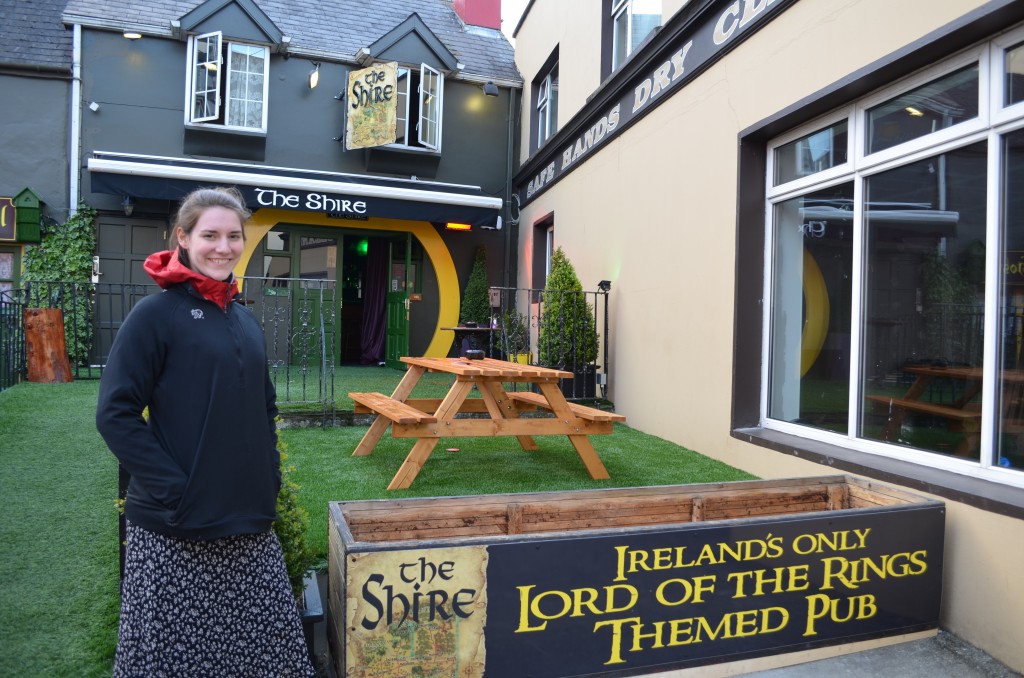 On our way to Lar Kinley Lodge in Killarney, we passed this gem

We were happy to visit before the flock had migrated there for the summer, however. On a gray, drizzly, nippy Saturday, we shared Blarney Castle with just half a dozen of our new best friends: the brave and the few. END_OF_DOCUMENT_TOKEN_TO_BE_REPLACED

Bed&Breakfasts have reduced us to two meals a day: No need for lunch after breakfasts like this

The Market sells everything from pig’s head to marzipan

Raspberry chocolate mousse from the market

After dividing our time between the capital city, Dublin, and the lovely coastal town of Skerries, we bid farewell to Ireland’s east coast today and headed south to Cork (home of the Blarney Stone). The Lord has blessed us with excellent weather these last few days. When we left the White Cottages in the morning, we met a mother on every block pushing her baby carriage; when we returned in the evening, we passed joggers and walkers on every corner. I wonder if the locals love fitness this much when it’s raining? END_OF_DOCUMENT_TOKEN_TO_BE_REPLACED

Our second day in Ireland (Wednesday, 4/22), my parents and I parted ways: They caught the bus to the Guinness Storehouse, while I patronized the Gate Theatre in Dublin. The Irish playhouse promised me Shakespeare; how could I resist?

Romeo and Juliet has claimed my affection since my freshman year in high school, when I convinced my classmates to focus our group analysis project on Romeo’s Myers-Briggs personality type–but I had never seen a professional production until now. END_OF_DOCUMENT_TOKEN_TO_BE_REPLACED

The morning of our second day in Ireland dawns; I open my eyes to white and light. It’s hard for a Bed&Breakfast to live up to a website that looks like this, but the White Cottages have not failed to impress so far! My parents and I are staying in Skerries, an idyllic coastal town separated by a 40 minute train ride from Dublin. When we arrived at the station with nothing more than an address and our aching feet, a tax driver offered us a ride to the cottages. Since he had come to the station to pick up his daughter, he refused to accept any fare. This vignette reflects how the Irish folk have treated us since our arrival. END_OF_DOCUMENT_TOKEN_TO_BE_REPLACED

Our waitress from the night before advised us to catch a train to Stonehaven, a coastal village with, that’s right, a castle! We received this suggestion with relief, since our only alternatives at that point involved either paying a taxi or daring to maneuver on the opposite side of the road. 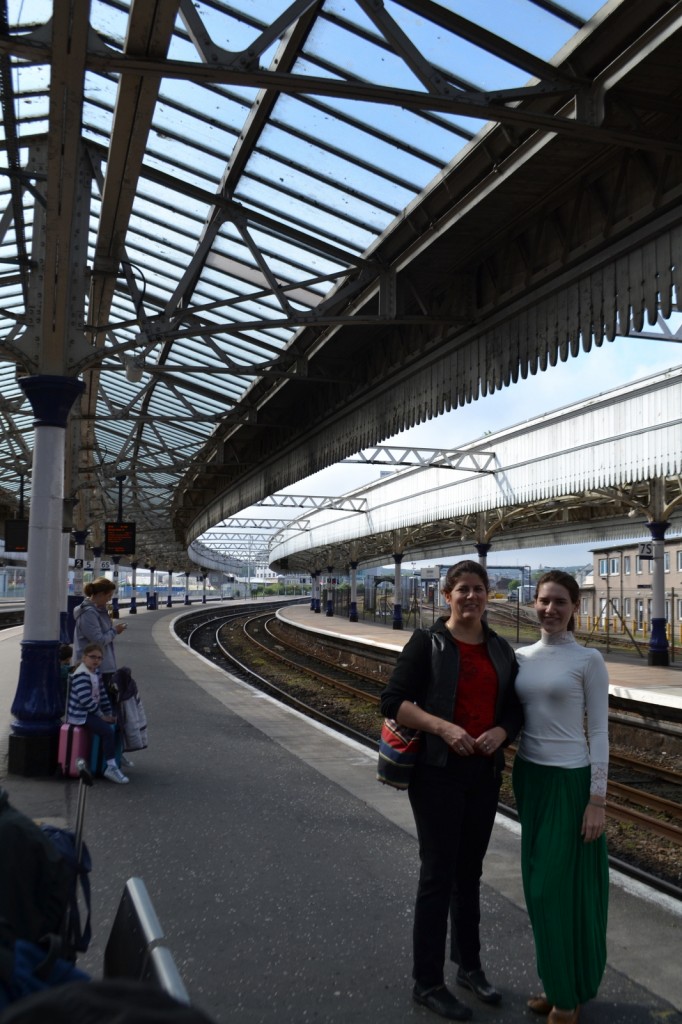 The same train station that welcomed us to Aberdeen. The tracks run alongside a breathtaking coast of rocks, waves, and sheeps! 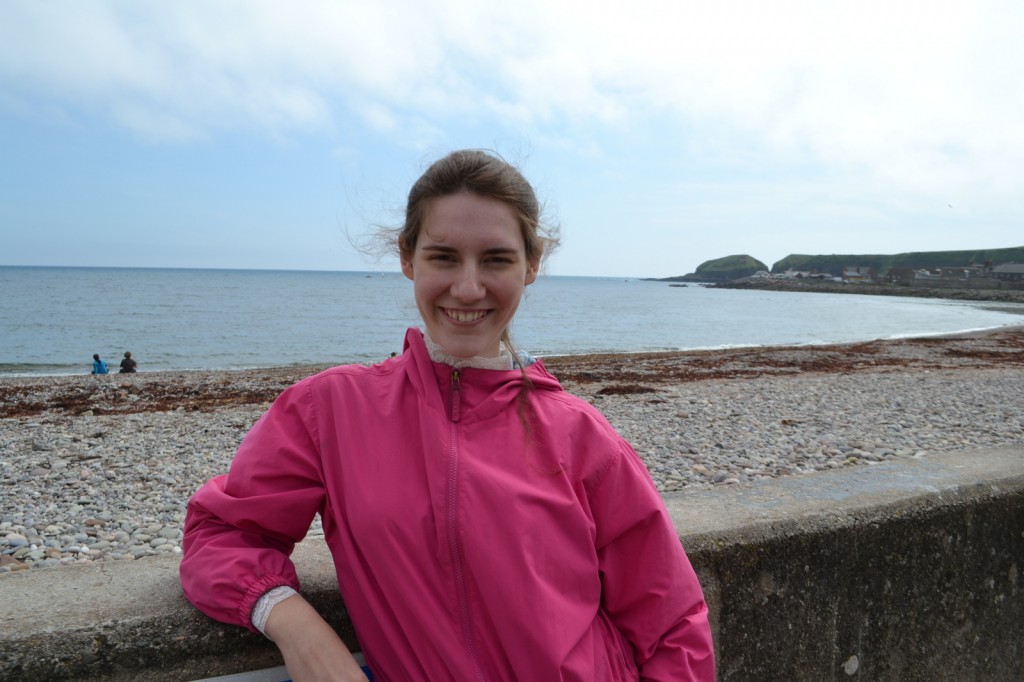 The little town of Stonehaven boasts a beach along with its castle. “Mostly people come for the castle,” the information center attendant shrugged. 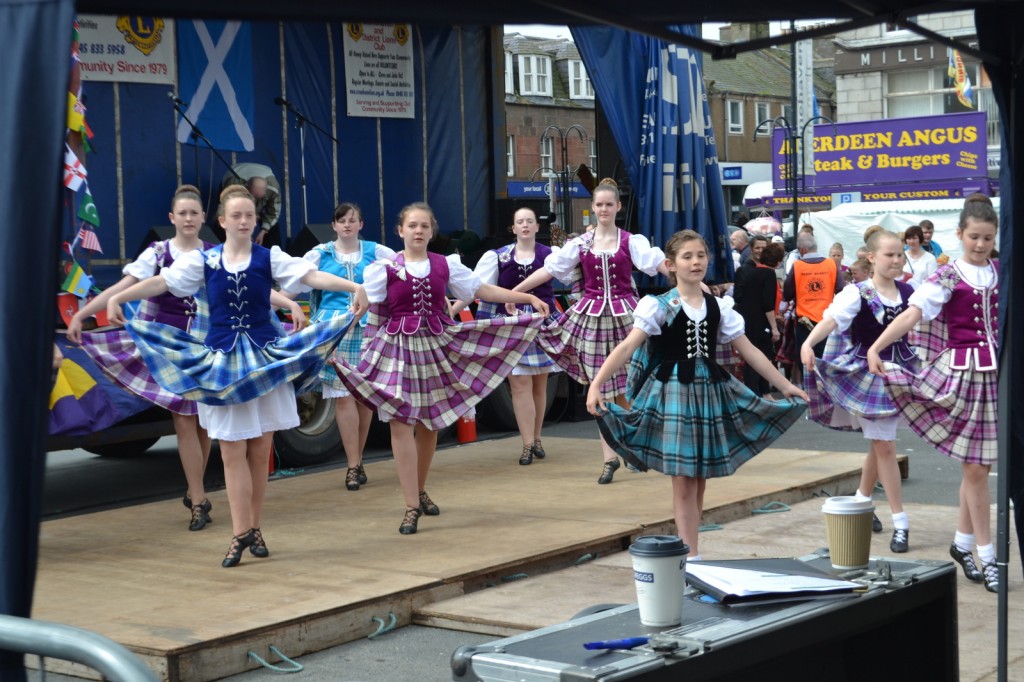 Providentially and with no planning on our part, we arrived on the day when the town also offered its local fair. The girls’ performance reminded me of our Highland Dancers, of course. 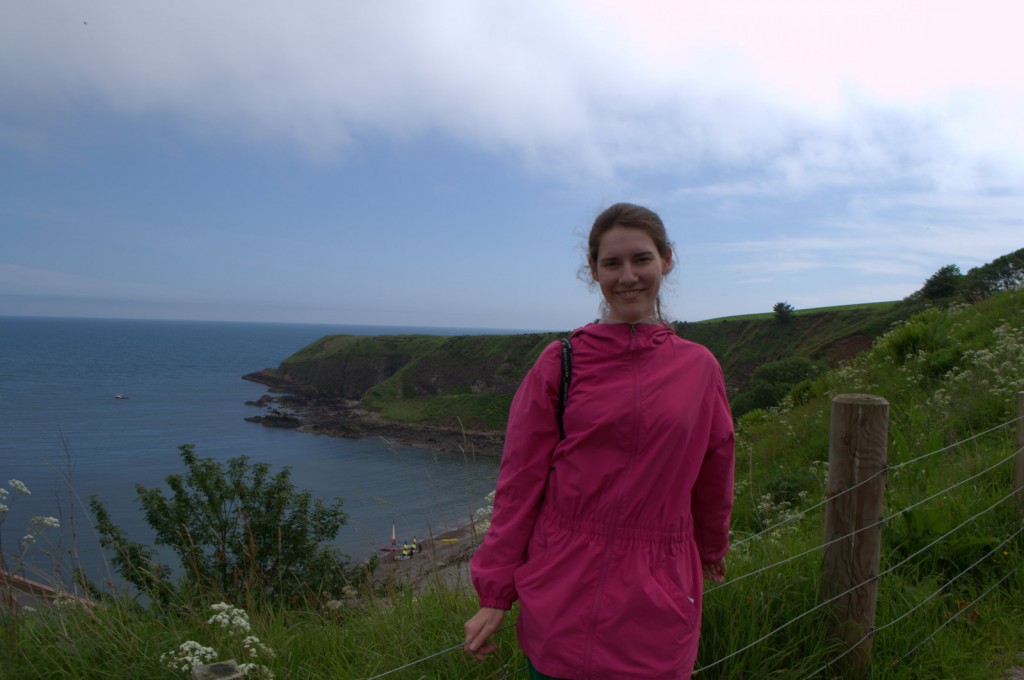 After munching on shortbread and admiring the dancers at the fair, we embarked on the 2 mi trek to Castle Dunnottar. 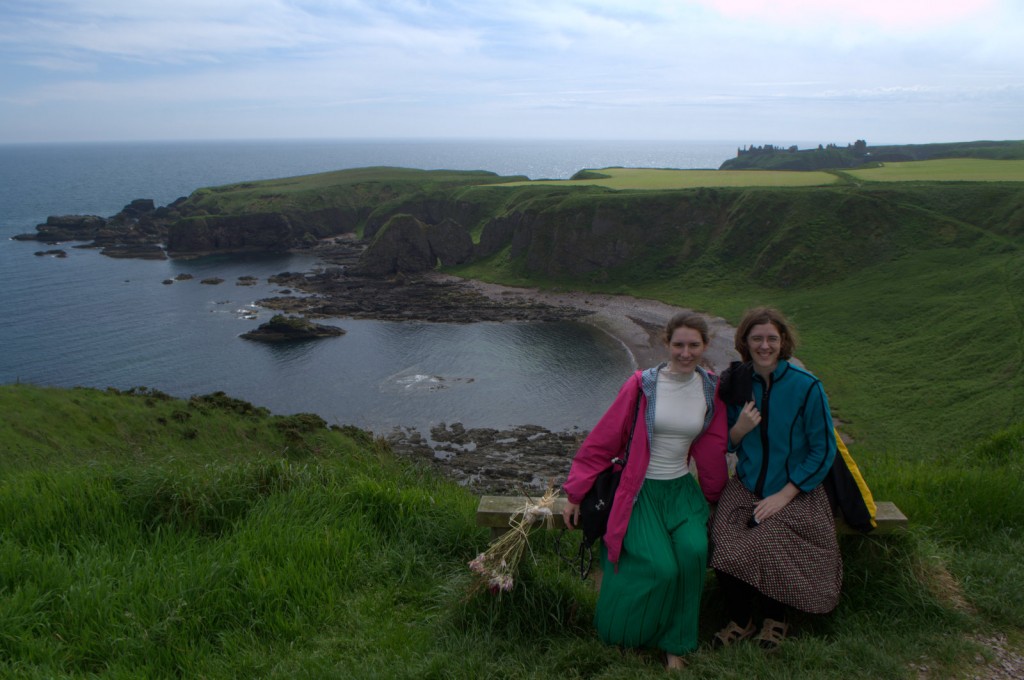 I could have stopped for a photo at every curve in the road. 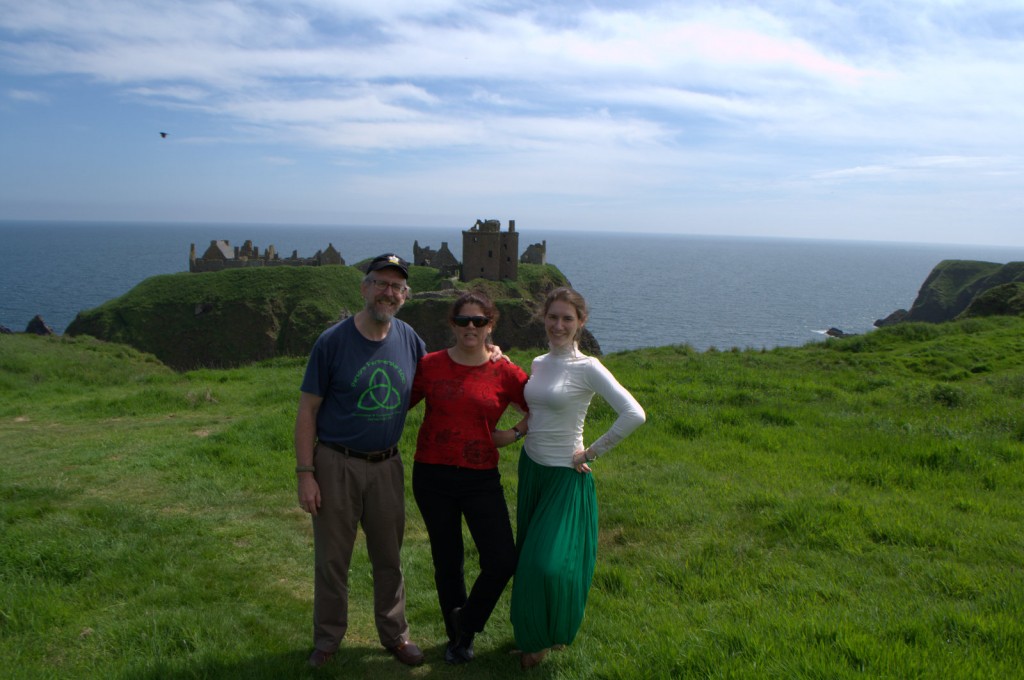 In case you were wondering, I did indeed purchase those pants in Turkey.

Castle Dunnottar: famed for visitors including Mary, Queen of Scots, and (according to legend) William Wallace. We reached it by way of a concrete staircase, which left us pondering how people had scaled the cliffs in the Middle Ages. An information center inside suggested the answer with this factoid: Ponies would carry supplies up the hillside to stock the cellars and furnish the dinner table of the owner (Earl Marischal)’s powerful family. 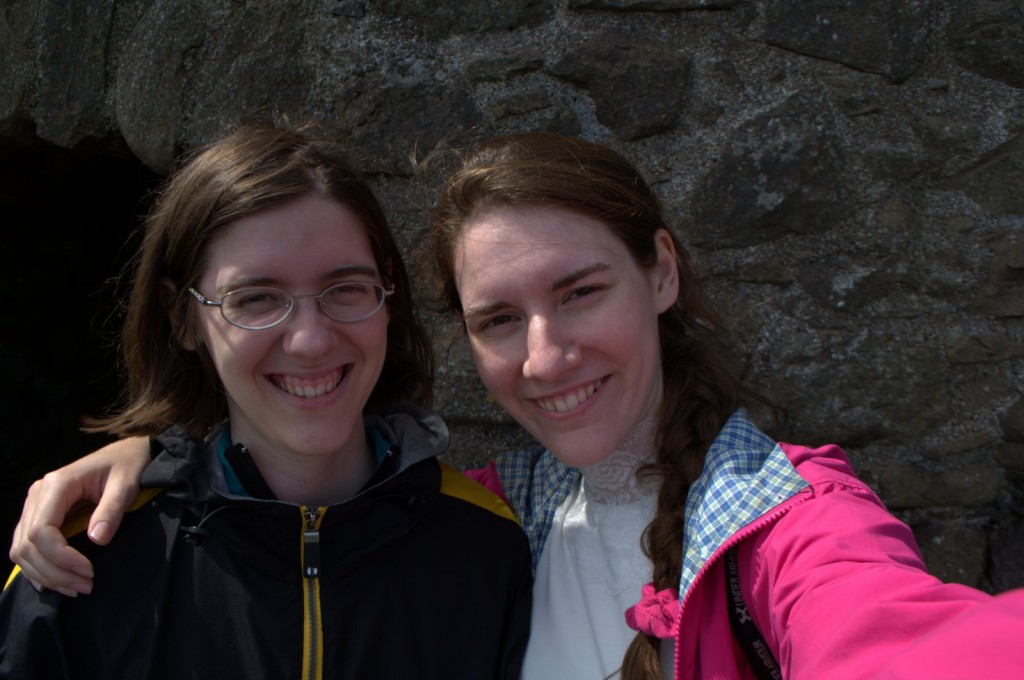 Stephanie and I poked our heads into almost every nook and cranny. Deep shadows cloaked surprisingly small rooms; one regarded the lonely fireplaces and imagined sleeping there in winter. 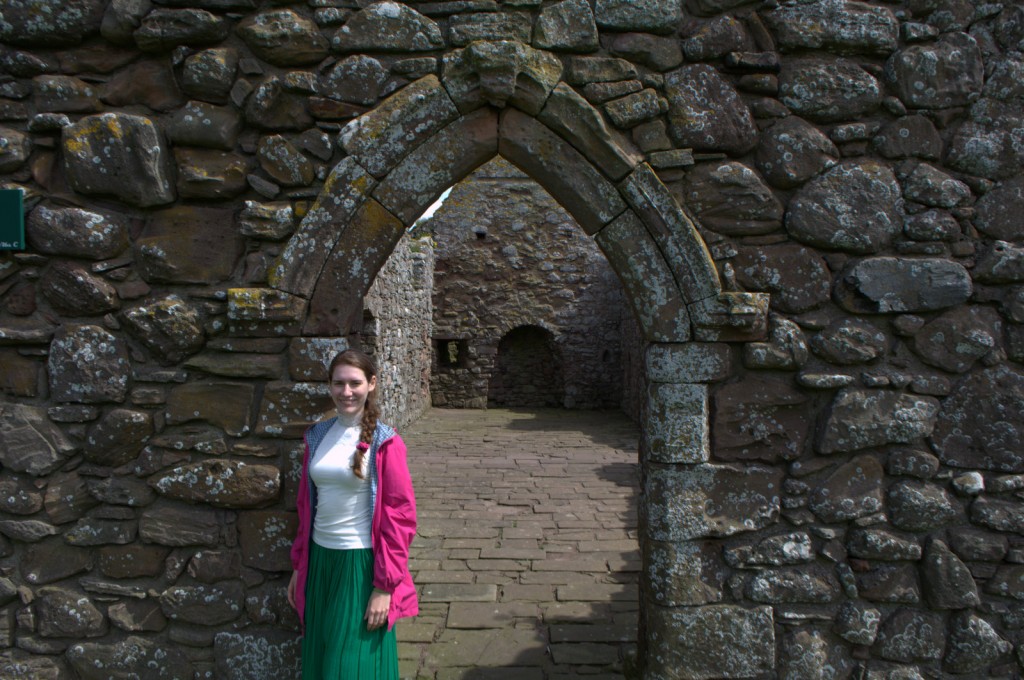 The chapel. In a dungeon nearby, the castle imprisoned almost 200 religious dissenters, who refused to acknowledge the king as head of the church, for weeks in the damp and dirt (1685). 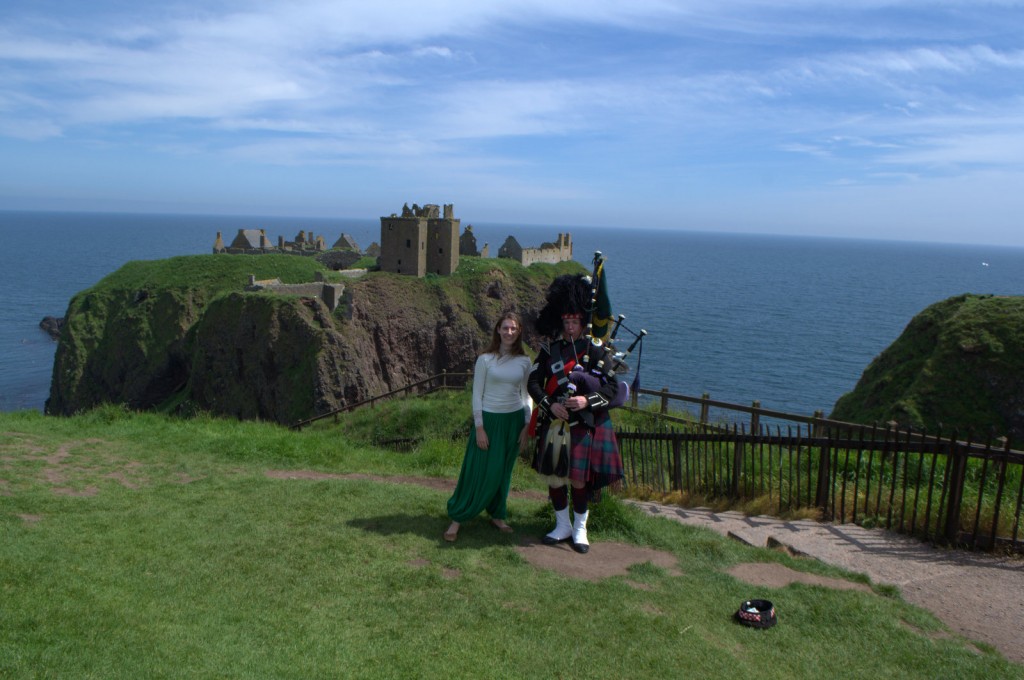 My iconic Scottish picture. Perhaps someone who has attempted the bagpipes could explain how this gentleman managed to play ceaselessly while thanking me out of the side of his mouth?

On the way back down the mountain, we stopped to pay our respects at the War Memorial. Which war? “All of them.” 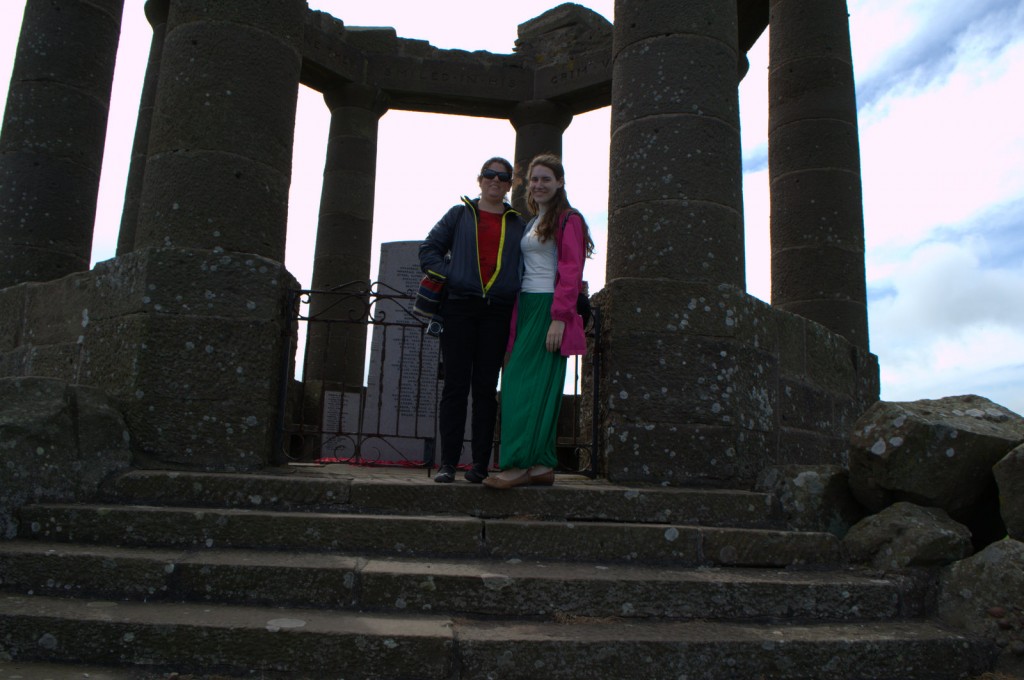 According to the inscription, the soldiers of Stonehaven laughed in the face of Death’s challenge. 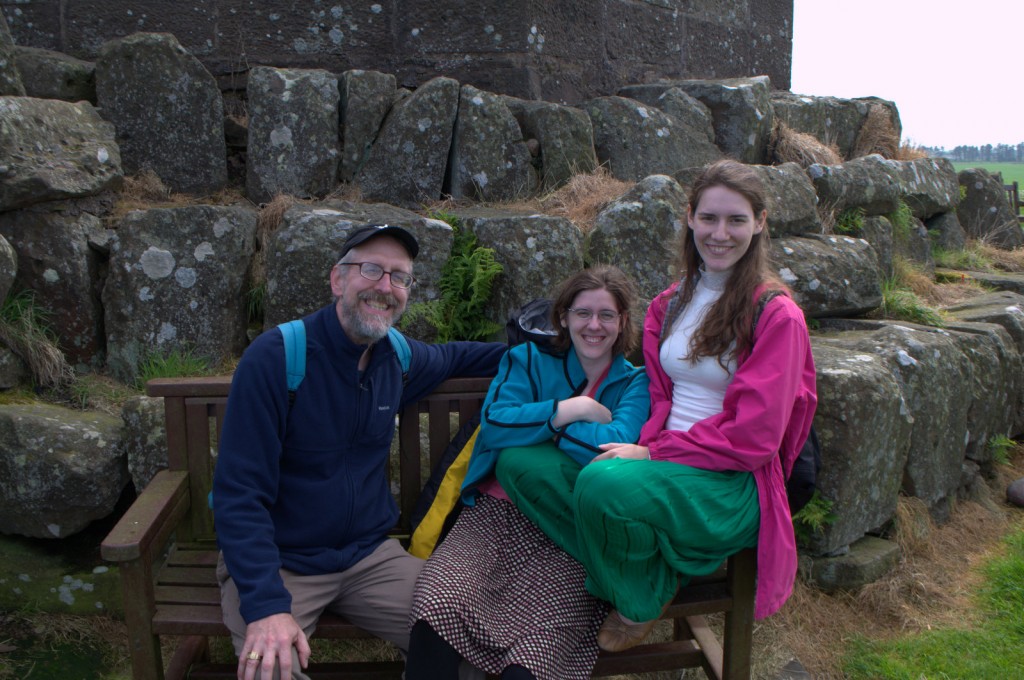 Nothing I’ve seen could compare with the view on the way to the castle, but we needed a breather after that hike! 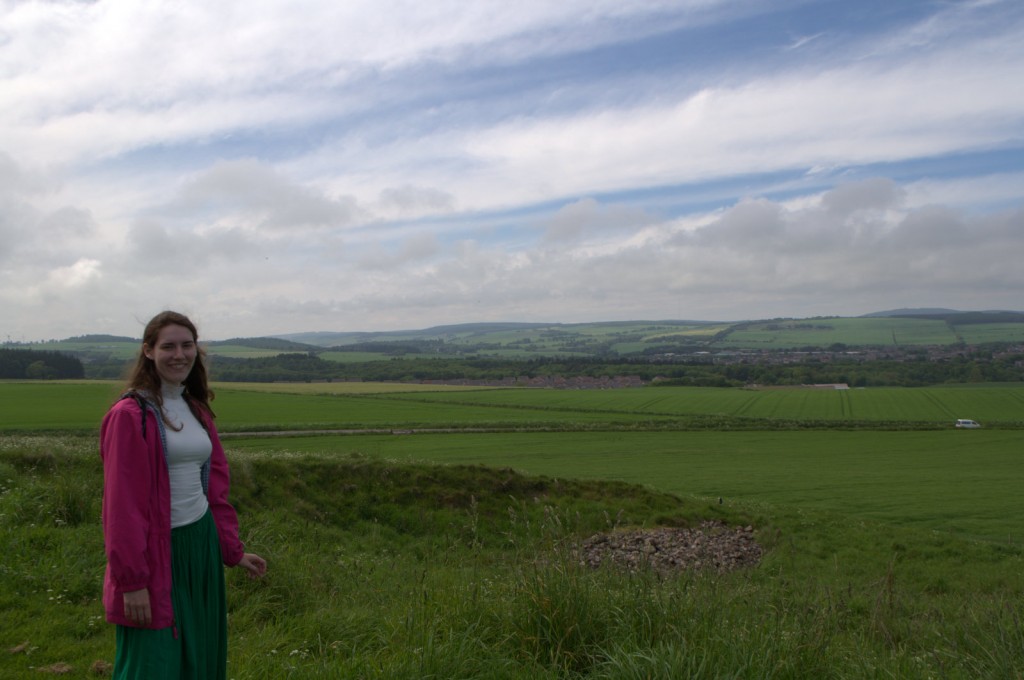 Facing the memorial, the town behind me 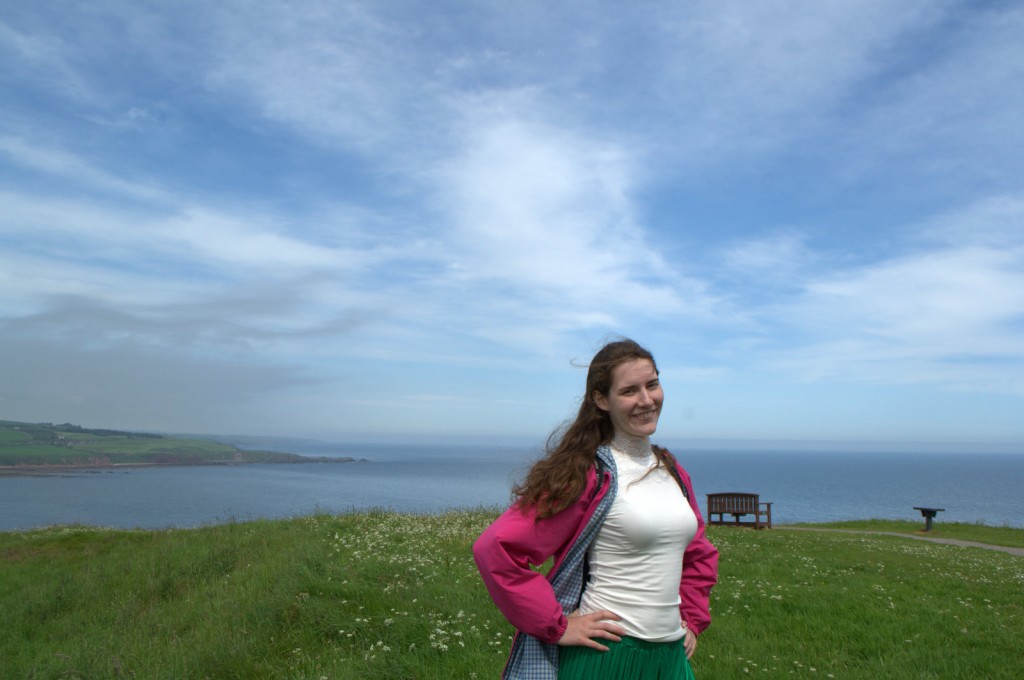 Facing the memorial, the sea behind me 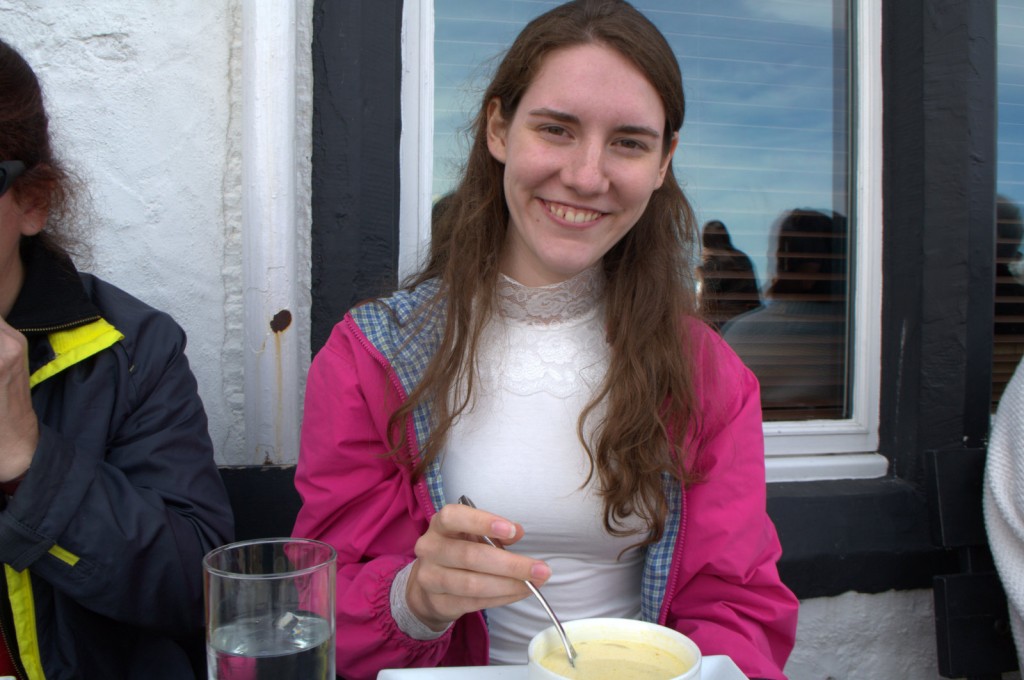 Our stomachs demanded we sample the local cuisine: cullen skink! Although the name suggests an odorous vampire, the dish actually consisted of cream soup with smoked haddock. With the sea air in our noses and Scottish brogue in our ears, we had never tasted finer. 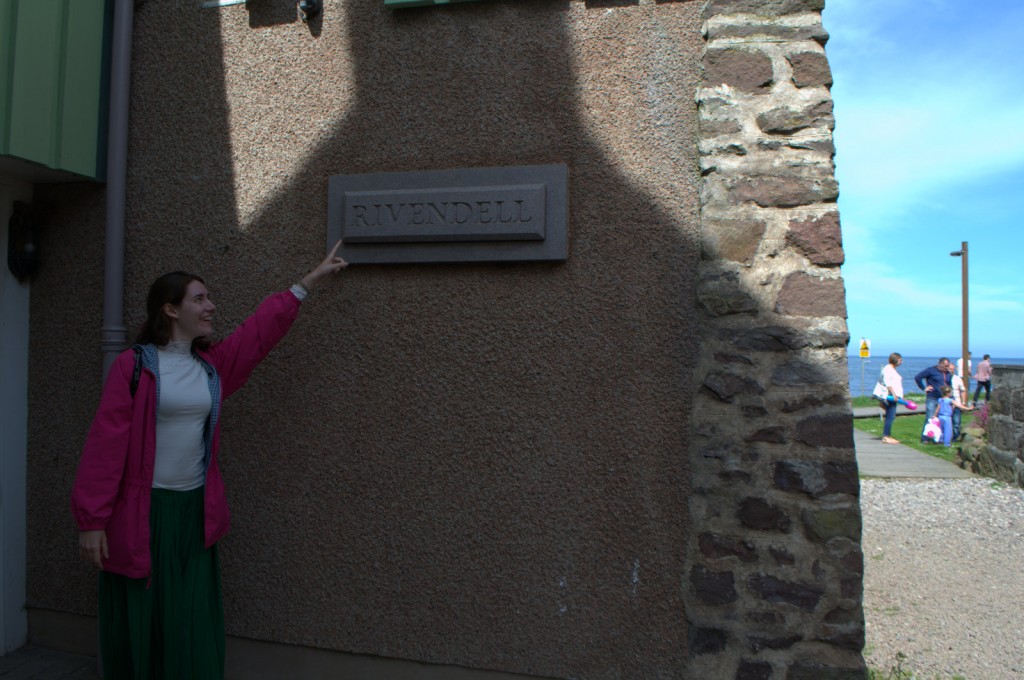 Away across the Atlantic, I find myself thinking of friends at unexpected moments

Once I humbled myself to look His way, I found God smiling on our trip. Our searching for activities online had proved about as effective as applying to an online dating service, so we hit the road to see what we would see. 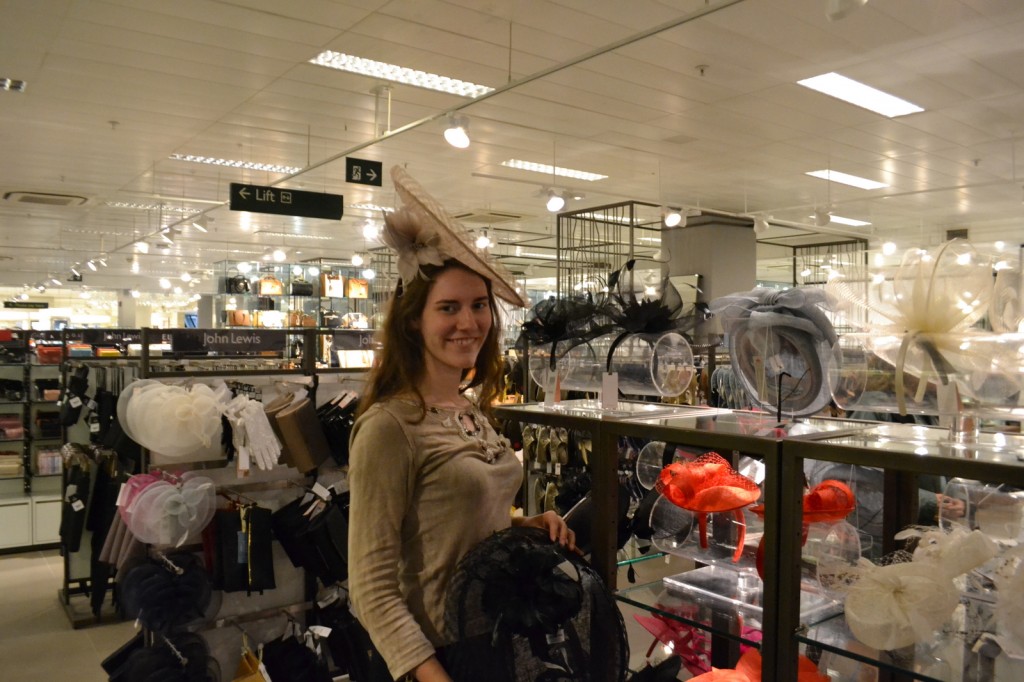 Department stores sell ladies’ hats in the UK! This specimen won for originality. 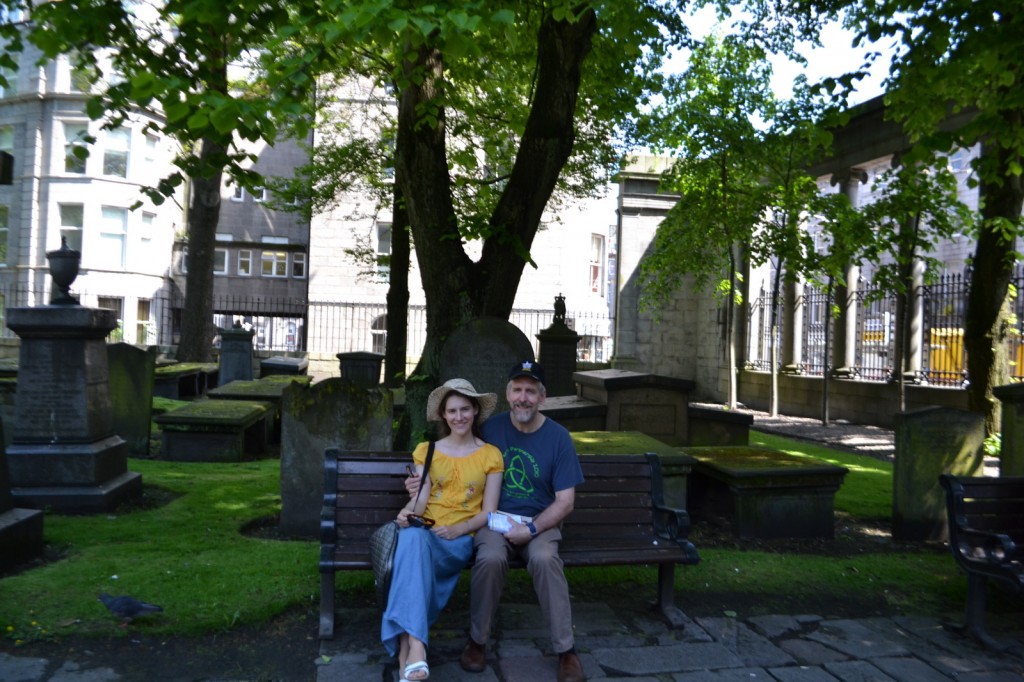 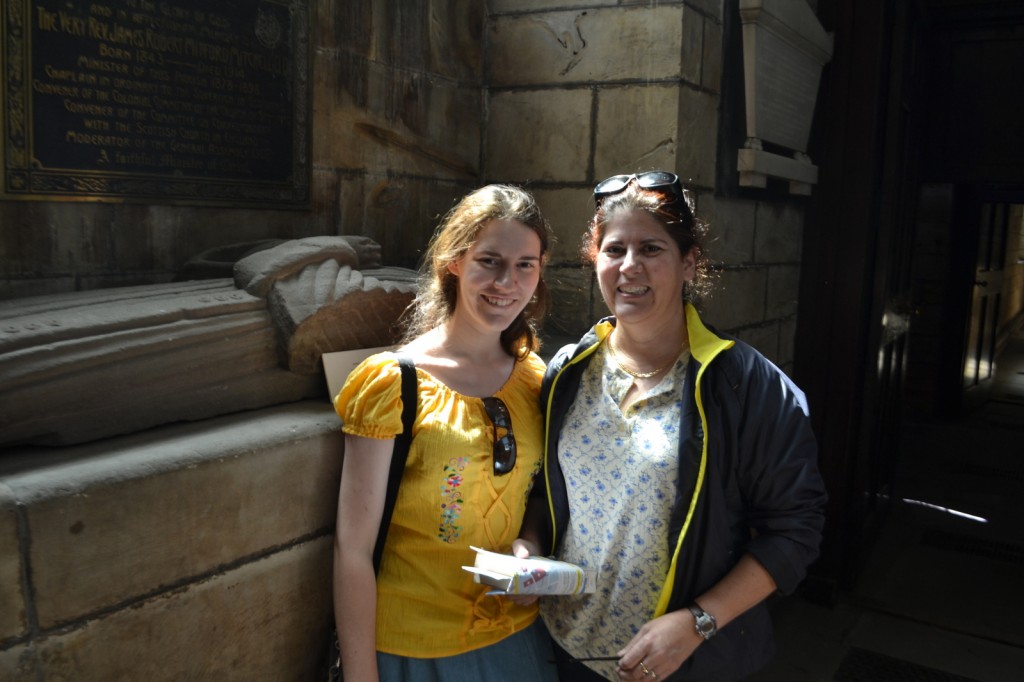 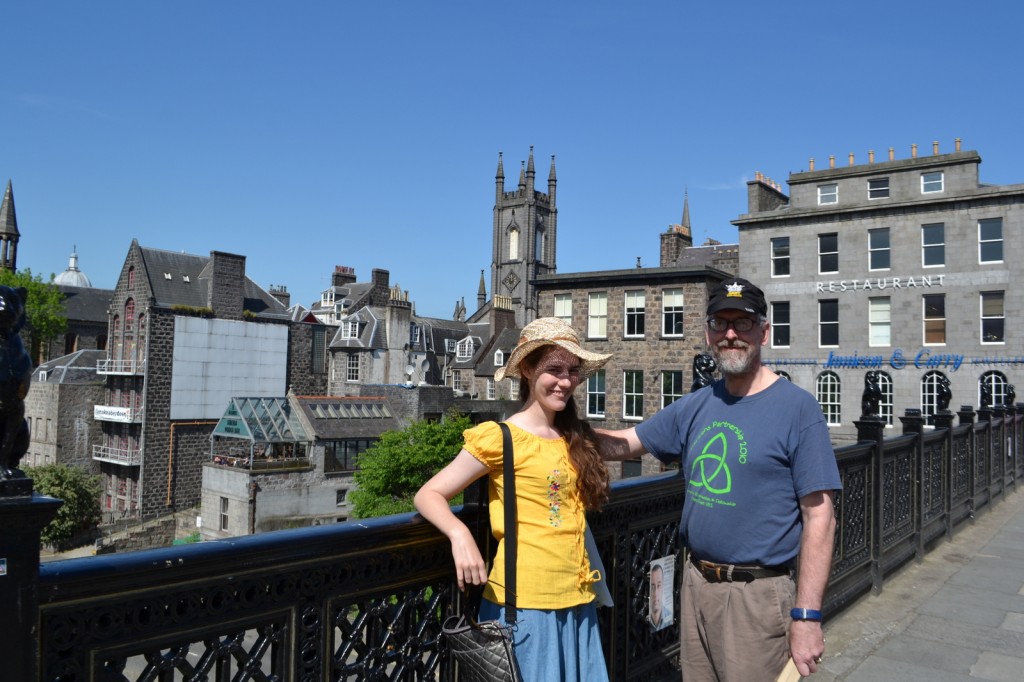 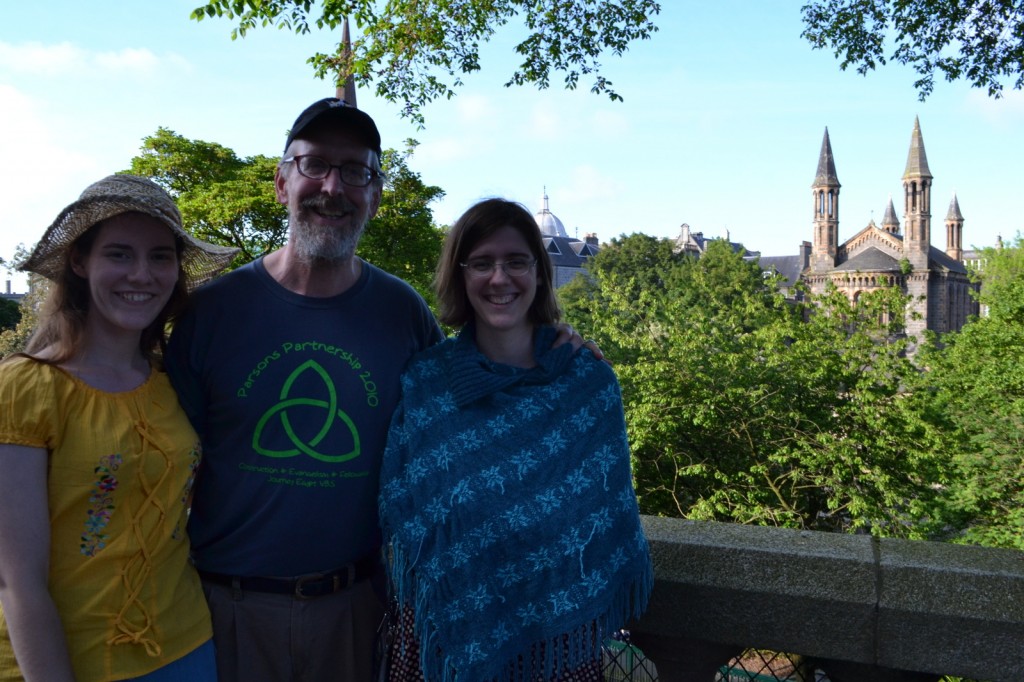 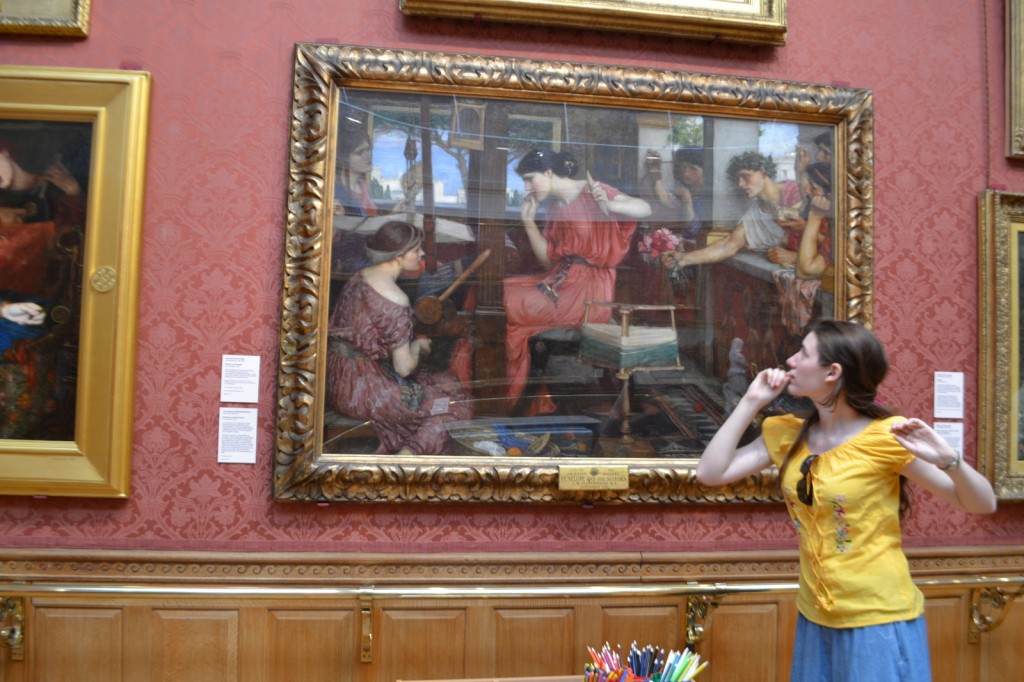 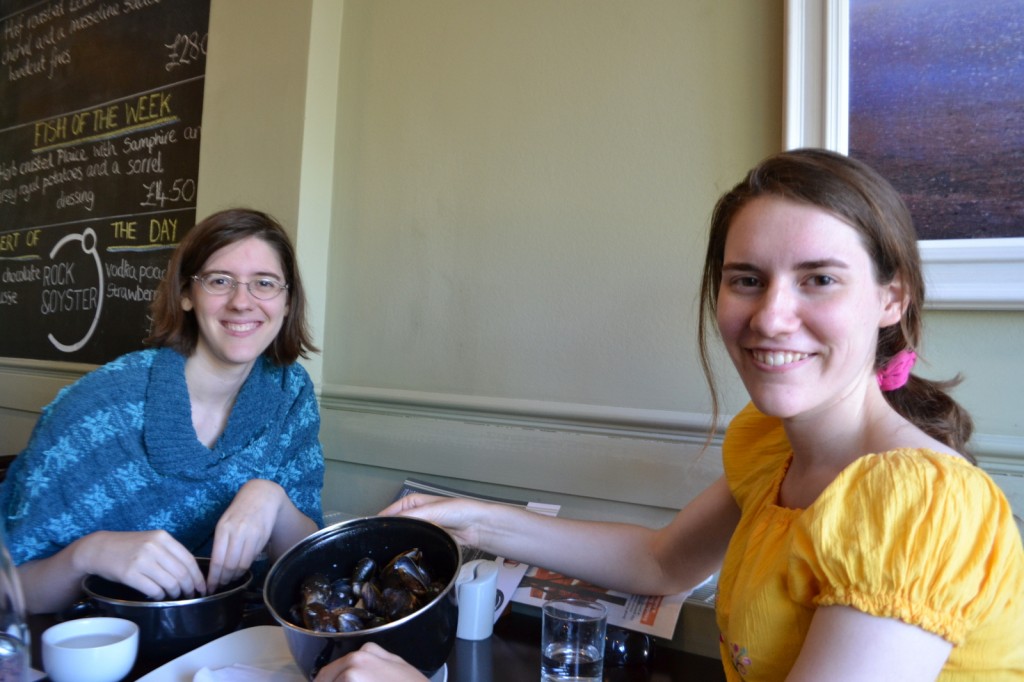 On the art curator’s recommendation, we dined on mussels and plaice at the Rock & Oyster. 5 stars and all our gratitude to our waitress, who played travel agent for us and wrote up a list of must-see sites in the area. 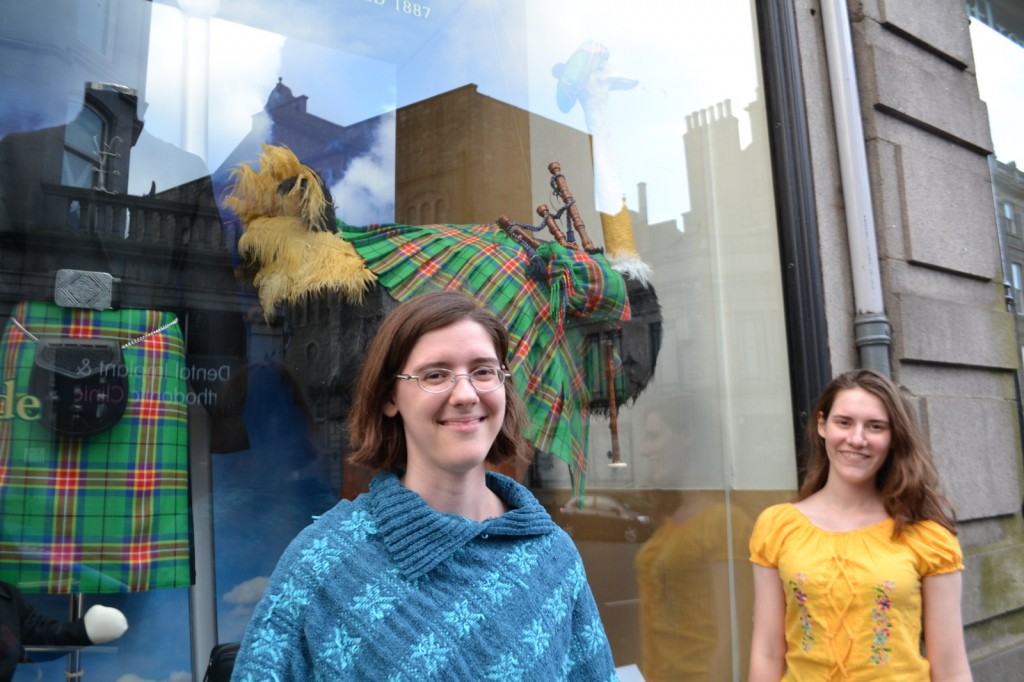 In case you can’t decipher it through the glare, that’s an ostrich. In a kilt. Welcome to Scotland! 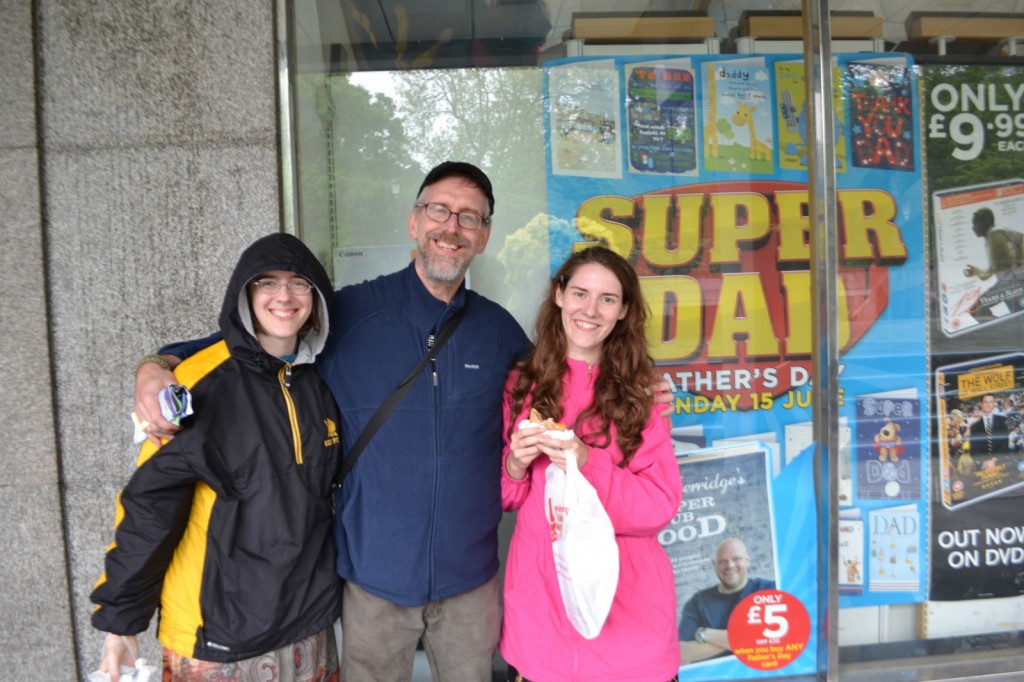 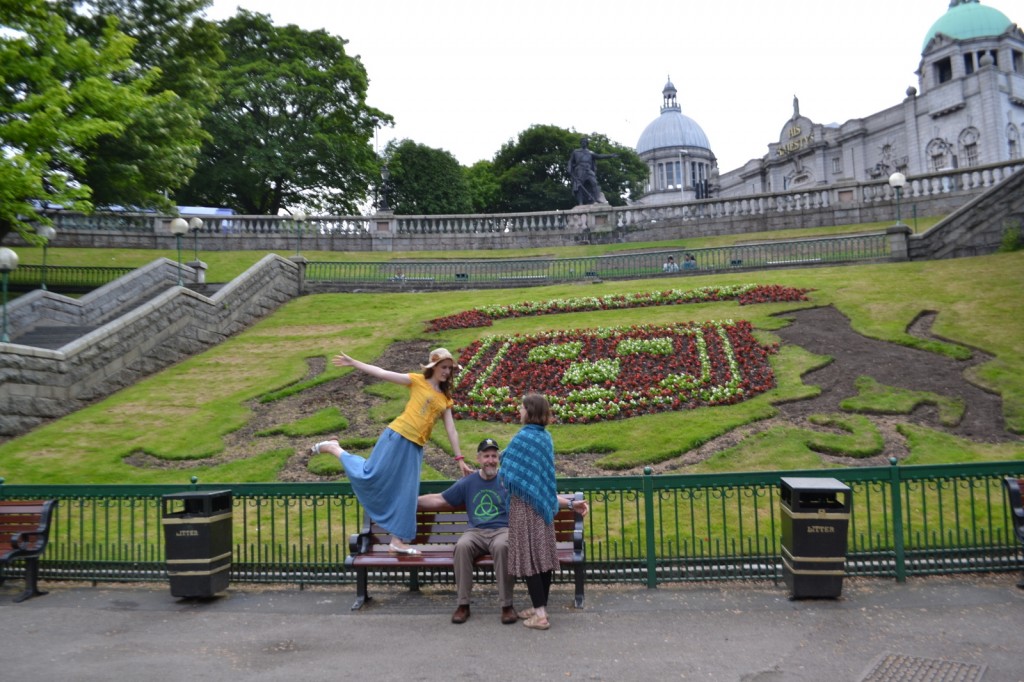 An illustration of my role within the family 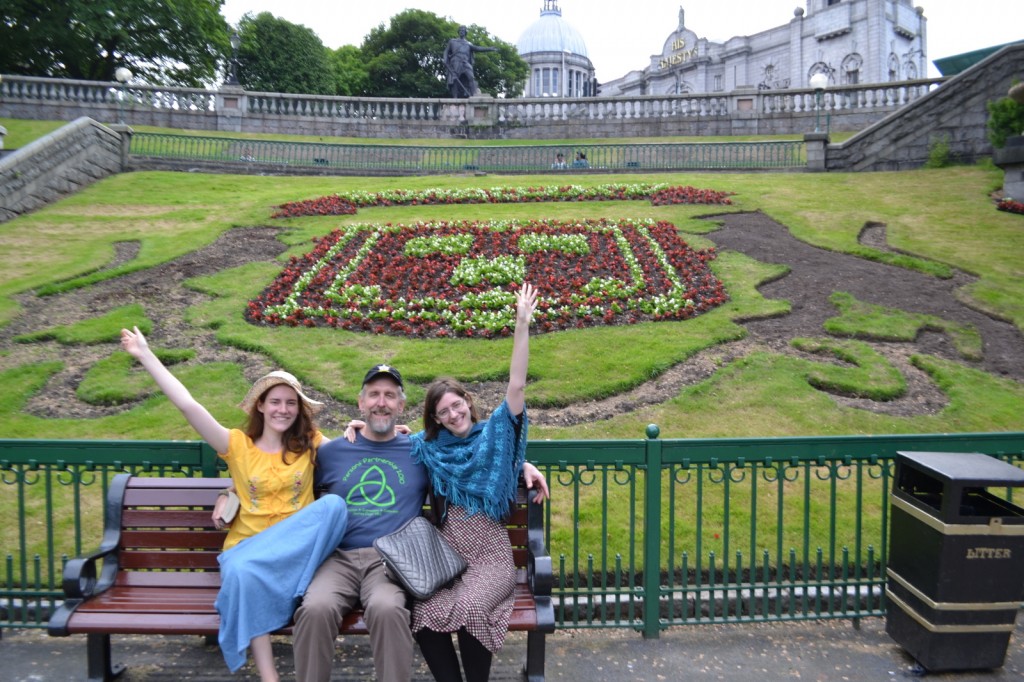 Today we caught a train into London; we depart for the States early tomorrow morning. Stay tuned for more photos.

The bus driver slid a glance at me. I had rooted myself in front of the exit door, ear tuned to the name of my street. After two hours of dragging my luggage through tunnels and up staircases with a page of directions glued to my nose, I refused to risk a misstep in the last leg of my journey.

Thankfully, my host had warned me of every possible pitfall along the way. Armed with her directions and my experiences of the D.C. metro, I gained her doorstep without a single wrong turn or missed connection. She welcomed me with tea, of course, and showed me to a guestroom perched on the top floor of her townhouse.  The window leans over the bed to share a view of London’s gray ceiling.

Her little boy found my name fascinating. Soon after making my acquaintance, he presented me with a “Hello Kitty” t-shirt.  “Look, two kitties!”