Ecuadorean highways combine the etiquette of the U.S. east coast with the switchbacks of West Virginian mountains.  The road winds through the peaks as if a bored student had scribbled it there.  Speed limits and caution signs litter the roadsides, and a single fluorescent line separates two lanes.  Kevin referred to the signage as “sugerencias” — i.e., suggestions.  Traffic swerves freely across both lanes, around trucks, buses, and the occasional car.  When nobody approached from the opposite direction, we straddled the center line.  On tight curves, Kevin slid over into the other lane.  I watched every twist and turn to stave off carsickness — hardly a sacrifice, considering the view. 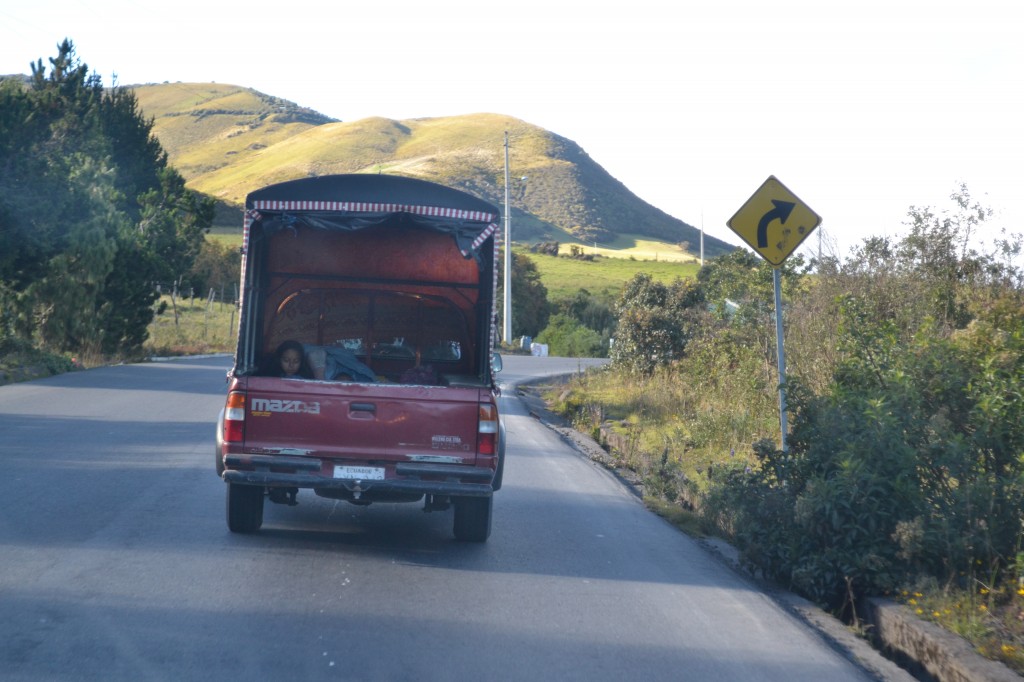 Our highway neighbors. Of course, we passed them shortly thereafter

My family and I often joke about the Appalachian “hills” compared to the Colorado and New Mexico Rockies.  The east coast deserves some veneration for its age, we admit, but in the west, they have real mountains.  In Ecuador, however, I re-calibrated my scale.  Trees and low houses leap up from steep inclines, and streams froth white on the rocks.  Towns advertise fresh “trucha” (trout).  I thought it mist that hung in the air, but no — we were driving through clouds.  From Quito to Chaco, our via point en route to Archidona, the altitude ranged somewhere between 4,000 and 14,500 feet.  God has outdone Himself here. 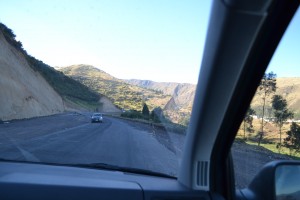 I mentioned chickens.  Almost as many animals as road signs decorate the highway, and both receive scant attention.  Not just chickens, but dogs, goats, horses, and the occasional donkey regarded us dolefully from their precarious perches and ragged fences.  Most wilted unattended under a constant drizzle.  I tried to restrain my sympathy, reckoning that neither their fleas nor their owners would have agreed with it.

Before we hit the highway as I have just described it, we traversed a stretch in the midst of construction.  The new Ecuadorean president, Rafael Correa, has apparently devoted considerable resources to building up the country’s infrastructure.  We passed several billboards that lauded these efforts to connect the “patria.”  At the moment, however, the road conditions leave something to be desired.  The night before, a landslide had delayed Kevin and Tessa for two hours.  Fortunately, we only waited a few minutes on the return trip for the workers to finish clearing it. 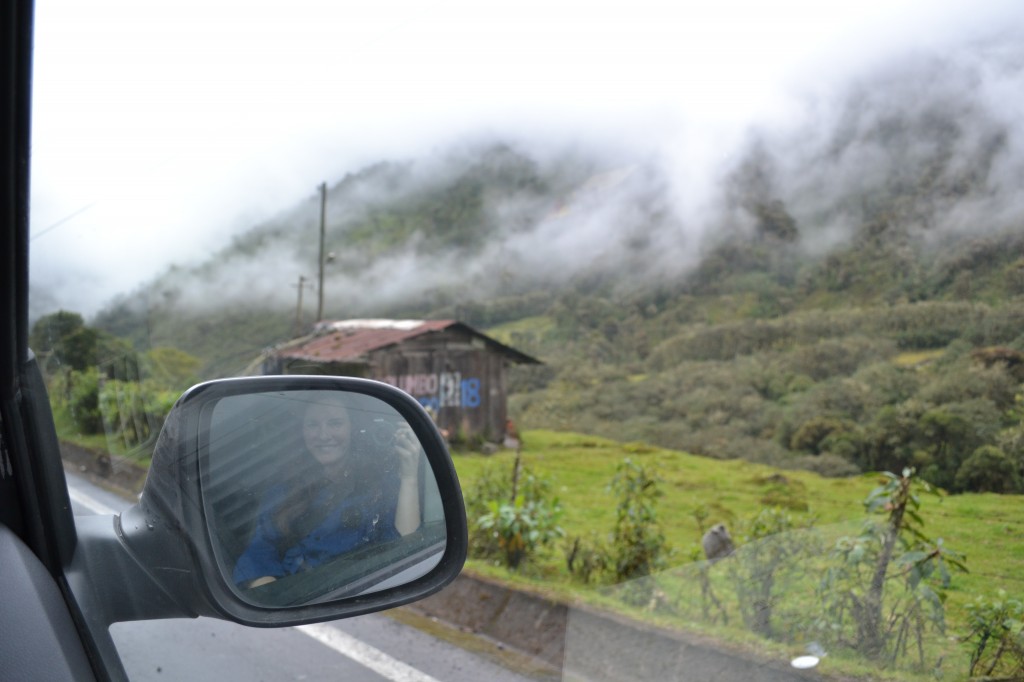 There be clouds here, near the landslide site

We arrived in Chaco well in advance of the soccer game, which deserves a post to itself.  Suffice to say here that I played sports photographer, and the kids played hard.  Go, Archidona!

Final stop before reaching our destination: ice cream.  Kevin, Tessa, Rachel, and I each picked out a treat, and Rachel covered the bill: $3.  (Prices here continue to amaze me.  The only catch is that you usually need exact change.)  I thought I had tasted coconut ice cream before, but I was mistaken. 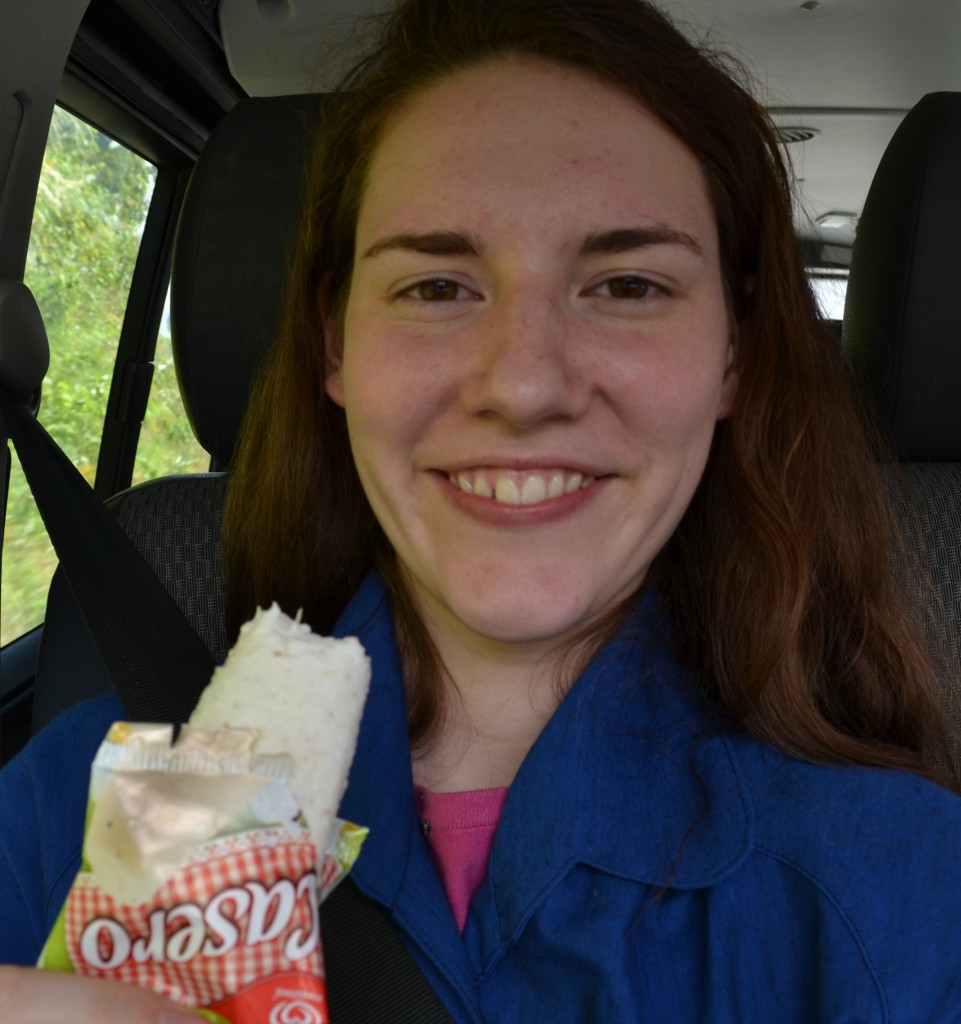