I had selected Aberdeen in large part because I wanted to avoid the mobs I had anticipated in Edinburgh or Glasgow. I discovered instead that our trip dropped in the gap between spring and summer tourist seasons. His Majesty’s Theater has closed its curtains for the weekend; harbor cruises won’t set sail for another two weeks; the Scottish dancing social meets the day after we leave. 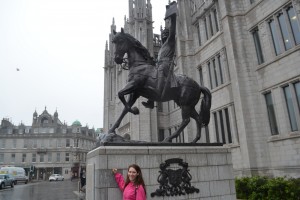 I had expected the trip would teach me about traveling, but I hadn’t prepared myself to learn the hard way. Now I realized we should have consulted the experience of fellow travelers or natives, not trusted the tourism websites. This seems so obvious in retrospect that I cringe to confess it. Aberdeen offered more of a refuge from tourism than I had bargained for.

After ratcheting my expectations back into line with my circumstances, I set about salvaging my plans for the weekend. We might see a performance in London the night we rest there before my family’s early flight, I calculated. Further digging produced a Scottish dance in a nearby town later this weekend.

What’s more, Aberdeen does qualify as a launch point for Scotland’s Castle Trail. Our taxi driver from the airport had recommended we “hire a car. It’s okay if you smash it.” Provided we can devise a surer means of arriving intact, three castles within 20 miles of the city make for a promising day trip…