The Shadow into Morning: Re-Evaluating My Service

Someone asked me last weekend why I joined Peace Corps: to change the world? or just to make a difference?

When I pondered the question, a single word bubbled up: experience. “Experience” spans the range of my motives, from personal delight in experiencing a new continent for the sixth time, to professional goals of gaining experience in working overseas.

Above either of those aims, I also desired “experience” in the sense of gaining maturity and wisdom.

“Though it cost all you have, get wisdom…”

So far, Peace Corps South Africa has delivered on all three aspirations. This past month, my lesson in wisdom has taught me to hope during dark and doubtful times.

May proved a difficult month, climaxing with a week eked out in Pretoria. With guidance from Peace Corps management, I recast my priorities for service and constructed a work plan for the next school term.

The amenities of a big city couldn’t compensate for missing site. As a trainee, I was bemused to hear veteran volunteers wishing for a return to rustic living while on administrative leave, but now it clicked: Sleeping in a backpackers is comfortable but lonely when your closest friends are 12 hours away.

Nonetheless, the extra time yielded an unexpected blessing: I encountered an idyllic haven, tucked away on the university’s sports grounds. 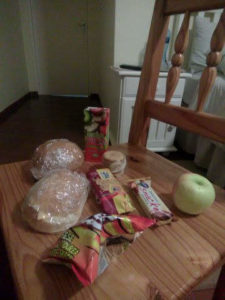 Hatfield Guesthouse in Pretoria wowed me with excellent service: Since the train leaves too early for me to catch breakfast, they packed me a bountiful bag to go 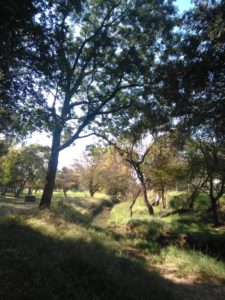 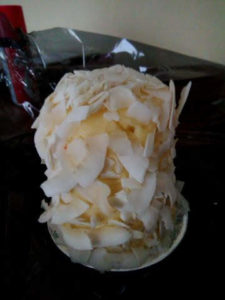 Following Ramit Sethi’s advice to splurge on what you love, I skipped the KrispyKreme and indulged in a coconut cake from a restaurant display case – 100% worth it

I invested another free morning in visiting a Montessori school right down the street from the guesthouse. The founder gave me a tour of the manipulables, stations designed to teach pre-schoolers concepts like color, size, and shape based on the educational philosophy developed by an Italian doctor over a hundred years ago. The Montessori approach isolates concepts to deliver the idea in its radical form to tiny scholars: making all wooden blocks blue, for instance, to avoid confusing shape with color.

At long last, back in KZN: My school welcomed me home with a sports match! We hosted a neighboring school for soccer and netball (a cross between basketball and Ultimate Frisbee).  With great fanfare–pop-up stalls selling grilled chicken feet, mismatched jerseys for our players, and a foot-stomping hymn to rally the troops at the morning assembly–we faced off against our opponents.

Since the locals wondered at my spectating at the soccer match instead of at netball (traditionally a lady’s sport), I bowed to custom and retired to cheer on the Grade 6 and 7 girls. 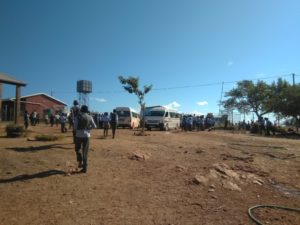 The neighboring school rolled up with non-optional blaring speakers 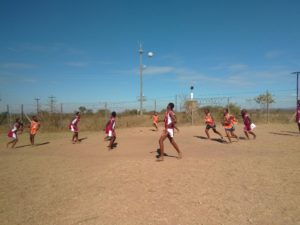 No designated netball court, so the girls set up hoops in the yard – one threatened to tip during the game!

It was a slaughter.  They were bigger, taller, and faster. Our team would force the ball across the court, gamely passing from player to player–then a long arm would scoop it out of the air just shy of the net. They scored on us so many times, we lost count.

With the competitive outlook bleak, I focused my sights elsewhere: the special moment before the match started, when I found myself among a cluster of students waiting for the action to roll.  To my delight and astonishment, they posed a grave question: Miss…do you have the three bears?

They wanted to read with me. 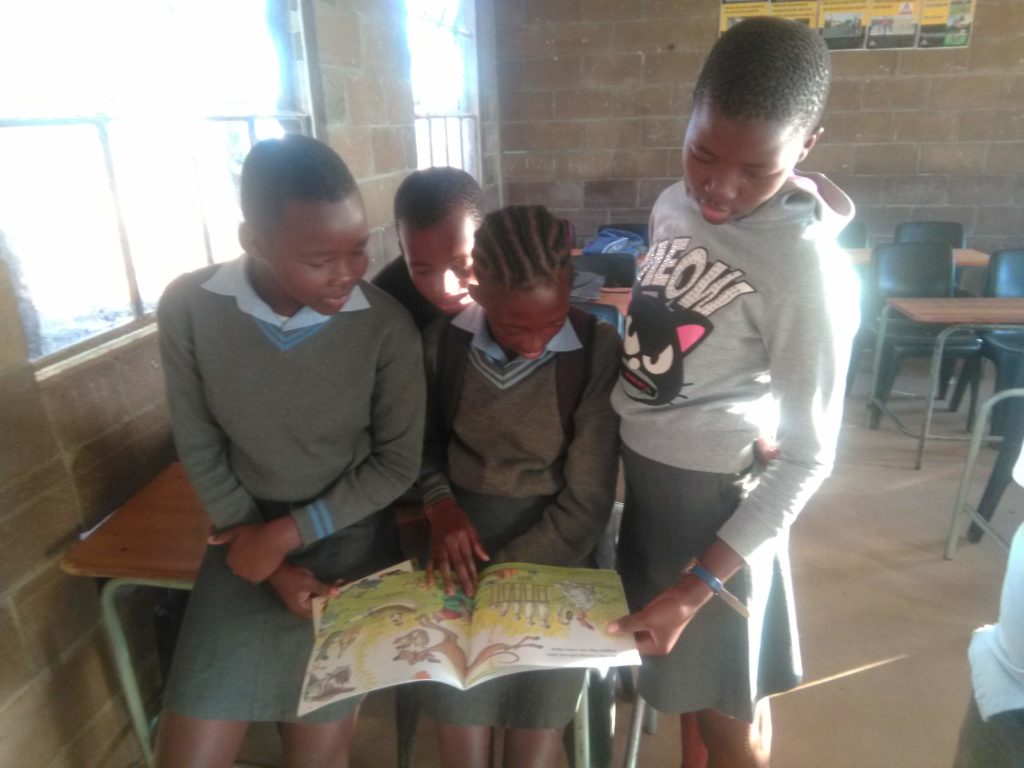 Since the match, I have committed to invading the school grounds half an hour early, with a stash of library books in my bag. Now learners play outside with a homemade ball, lounge around…or read. I cherish hopes of launching a library club.

When they said Peace Corps service would make me fit, I didn’t believe it…but my South African friends have snared me at last me with the jogging addiction! After school, I tackle the hilly path to school with a collection of neighborhood kids, most outfitted in plastic sandals or their own bare feet.

One weekend, my dear friend Talitha invited me to a more formal display of my newfound allegiance: a neighborhood 5k!  We kicked off the weekend with a backyard braai, then rose early the next morning to advance in force on the starting line.

In classic style, the race scheduled for 9am launched at 10:30am.  For the second 5k of my life, I made it my mission to run the whole way — no matter how slowly. 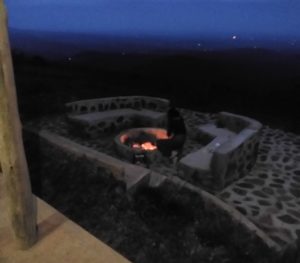 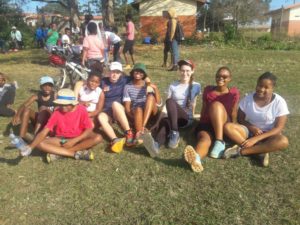 My doctor friends have teased me about considering livestock my companions at site.  It might sound misanthropic, but there are perks: making the intimate acquaintance of some stinking cute critters.

The brand new goat twins finally yielded to a photo shoot because they were snoozing in the sun when I snuck up on them. It intrigued me to observe that it’s not my presence that prompts them to flee, but rather my movement. 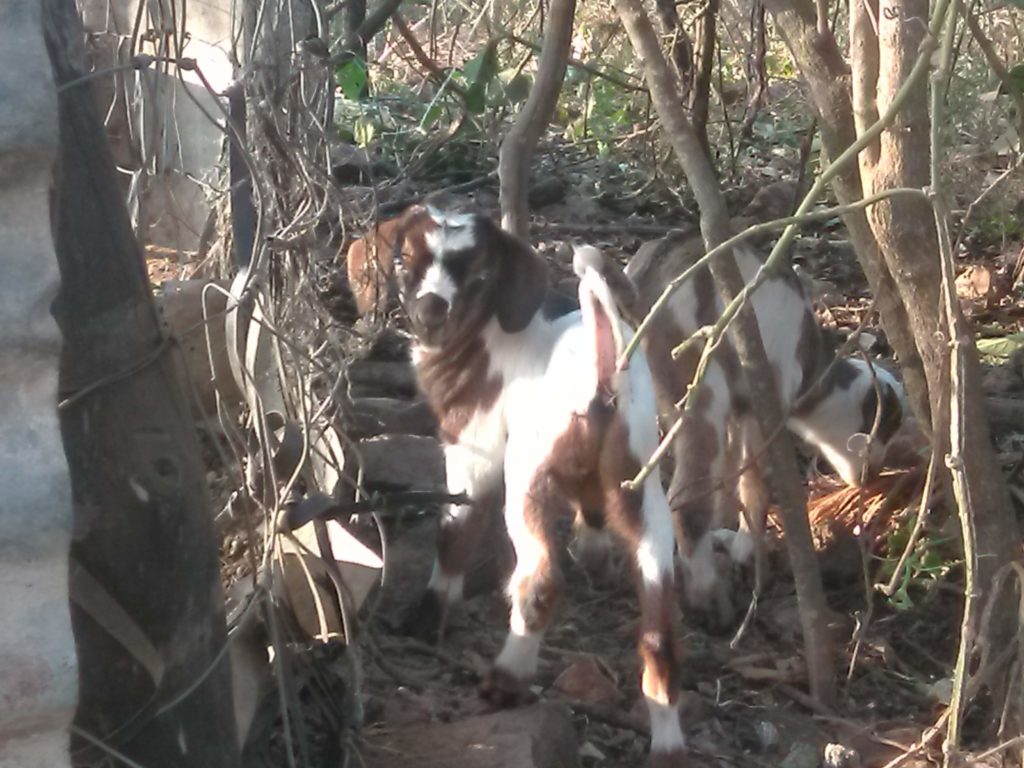 A mini hiatus from traveling ended with the All Volunteer Conference in Pretoria: a Peace Corps training that brings together all the current cohorts once every two years.

It can be overwhelming to plunge into close company with over a hundred Americans, but I found myself warming to the succession of small connections: reconnecting with the people who shared my first months in country with me, swapping stories at site, learning the history of our staff — all returned Peace Corps Volunteers.

It was also a blessing to meet Tamarah, Montessori educator extraordinaire, in person. As a newly arrived health volunteer, she has advised me from a distance on dignifying my learners with respectful treatment. Her approach prepares them for a future as professionals — shaking hands instead of slapping a high five, for instance. 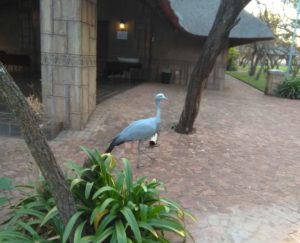 Blue cranes are the national bird of South Africa! The flock wandered the grounds, flaunting their exquisite tail feathers and menacing unsuspecting Volunteers at random 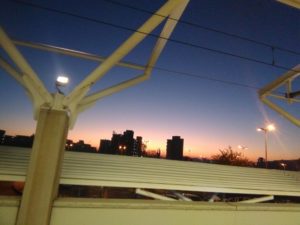 One morning at the conference, I reunited with my prayer partners Judy and Sydney for an early morning walk. It resurrected our times during training, when we would steal away at breaks to circle the grounds and seek God together.

As the sun rose and a new day began, dark and difficult thoughts faded, and I felt the presence of the Lord with us.