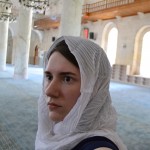 “How do Muslims believe they are saved?”

We had settled onto a raised dais that once contained the altar of a church. Turks had re-built it as a mosque. Unlike the Hagia Sophia, the queen of Turkey’s re-purposed churches, this structure had no other visitors save our tour group. We had entered a silent hall, we women wrapped in scarves and long skirts, everyone barefoot. Overhead, iron bars pierced the marble Byzantine columns, reinforcing the stone. Across the floor, two men knelt in prayer. At our side, Mehmet concluded his brief introduction to the religion of Islam and invited questions.

In the silence that followed, I clarified my query: “How do Muslims get to Paradise?”

Mehmet had identified many points of agreement between Christians, Jews, and Muslims. “We consider all of the Bible holy,” he informed us. Muslims also believe that Abraham had attempted to sacrifice Ishmael, not Isaac, and they deny that Christ suffered death by crucifixion–in contradiction of the Bible. “We interpret these stories differently,” Mehmet shrugged, when we pressed him on the discrepancy.

I was expecting that Mehmet would answer my question by explaining a creed, or reiterating the five pillars of the Muslim faith. That reveals how little I comprehended of the chasm between other religions and Christianity.

“Oh!” Mehmet grasped the question. “If you do a lot of good deeds and follow the rules of Islam, and if you are a good man… you have a high percentage chance!” He grinned, and we chuckled reflexively, but his answer dropped like a stone in my mind.

As a high school physics student performs a rote experiment and observes the law of gravity manifest itself once again, so I recognized Mehmet’s explanation as evidence of what I have always learned: For all their family ties, Islam does not even approximate my faith’s central teaching of Christ’s sacrifice for mankind. Muslims believe they can and must earn God’s favor by their deeds. Christians acknowledge our failure and inability to please God. Our salvation is completely His work.

They live by the Law. We live by Grace.