Act II: The Christening of Quatty

What happens when you have long hair, and you sleep in a dorm full of girls? You braid it, of course! — or, rather, the girls do. Then your friend opens her treasure trove of hair ribbons, and she gives the girls a gift they will wear every day for the rest of week, whether it matches their outfits or not. In fact, some of the girls only bring one set of clothes. You notice that, and wonder why.

At least, that’s what Rachel and I did at Camp UNPES.  During the first and only meeting between staff and volunteers, the head man, Roberto, encouraged us to love the children without restraint.  “This isn’t America — you can hug them and pick them up!”  He could have warned us how much love we would receive in return.

The children snapped to us like iron filings to a magnet.  I would ruffle their hair, and their faces would crack open to reveal smiles like geodes inside. 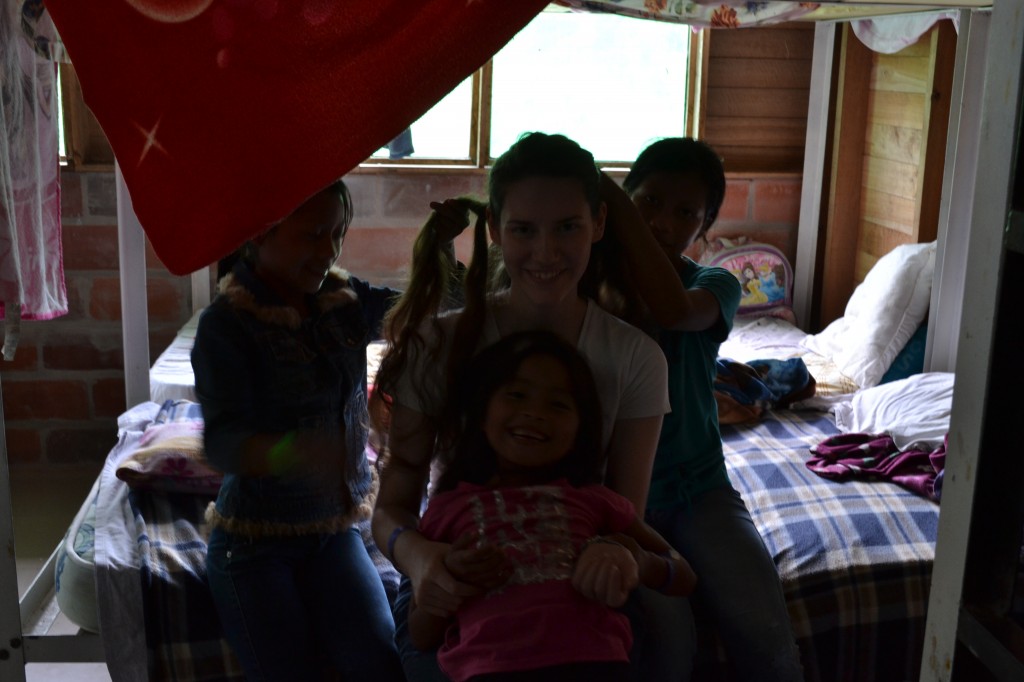 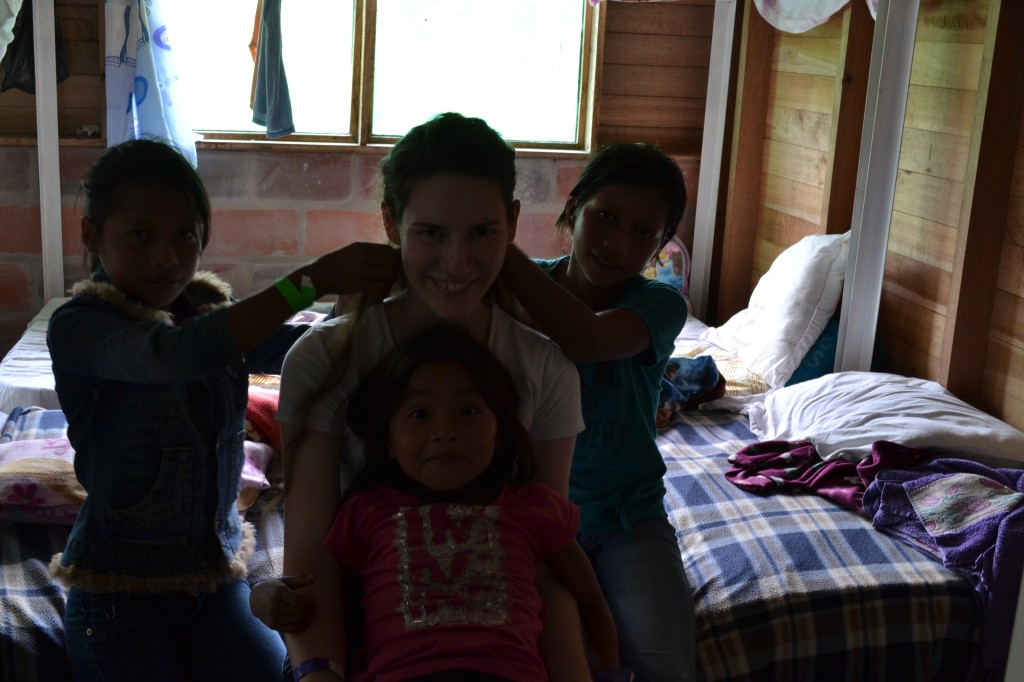 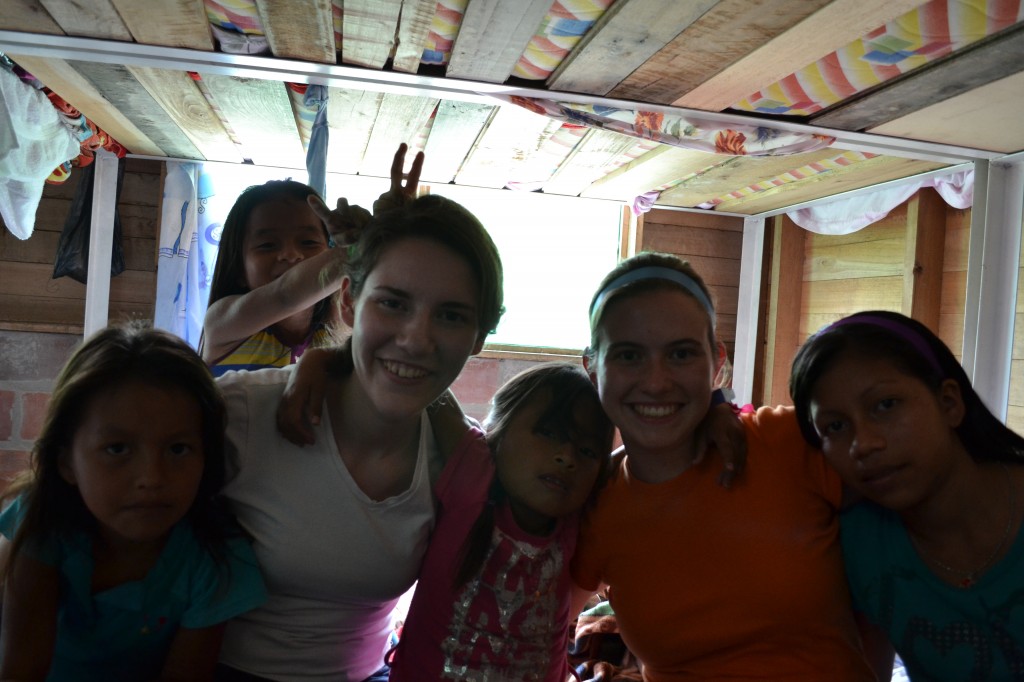 After the first night, though, I could have wished for less social roommates.

The schedule listed wake-up time as 6:30 am, but whispers snaked through the bunk beds an hour earlier, Monday morning.  I didn’t grasp the situation immediately because I hadn’t switched my watch to Central time.  When it finally occurred to me, I rolled back over and dozed until 7am.  The mattresses sprawled over planks of wood, which patterned my back with hard and loose.  Also, I had misplaced my pillow.  Nonetheless, I managed to sleep, and 25 minutes sufficed for my morning routine. 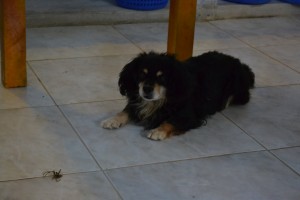 Even the cook’s dog contributed, by guarding us from spiders!

I reported to the kitchen at 7:30am, where a line of children stretching down the mountainside and endless stacks of trays awaited me.  Two other volunteers joined me; I translated for them whatever couldn’t be communicated through gestures.  Along with a squad of Ecuadorean cooks, we lined up in battle formation at the counter.  Every time we slid a plate of eggs and toast, juice and coffee, through the window to the waiting children, three more took its place.  The strongest man on earth would have tired from it, but the ladies in the kitchen kept smiling. 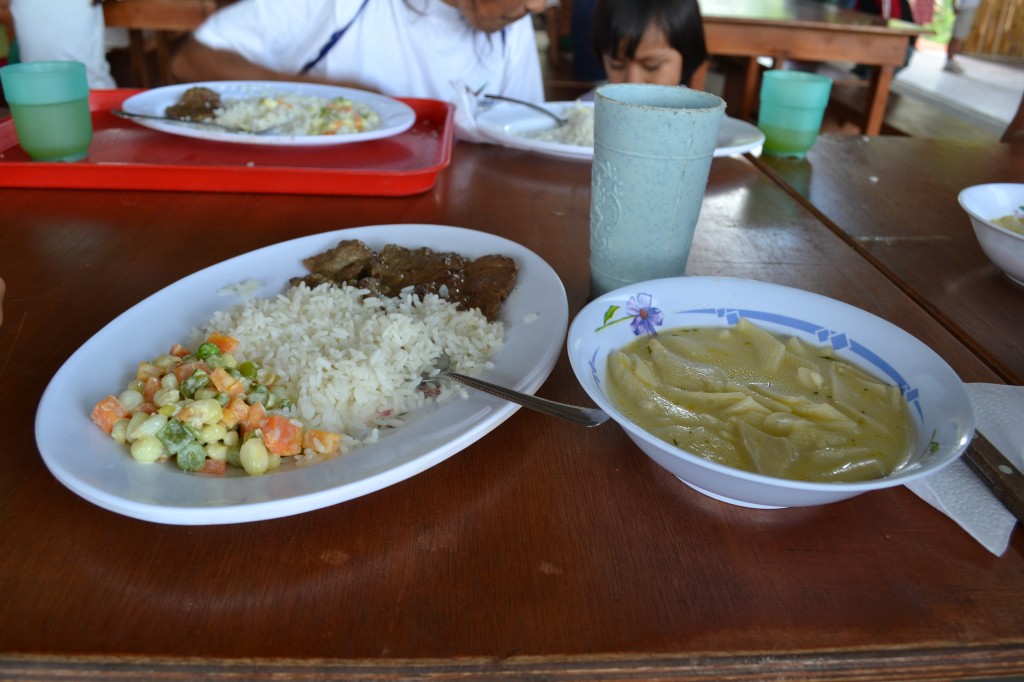 Soon after I dragged myself out of the kitchen and sat down to my just reward, a designated group of volunteers and children collected and washed the dishes.  They took their work seriously — every meal, in fact, impatient dish-washers would hover at my elbow, waiting for me to scarf the last of my rice so that they could whisk the plate away.  I learned to placate them with unneeded utensils, or perhaps my tray.  “Todavía no!” I would protest when they reached for my soup.  “Not yet!” 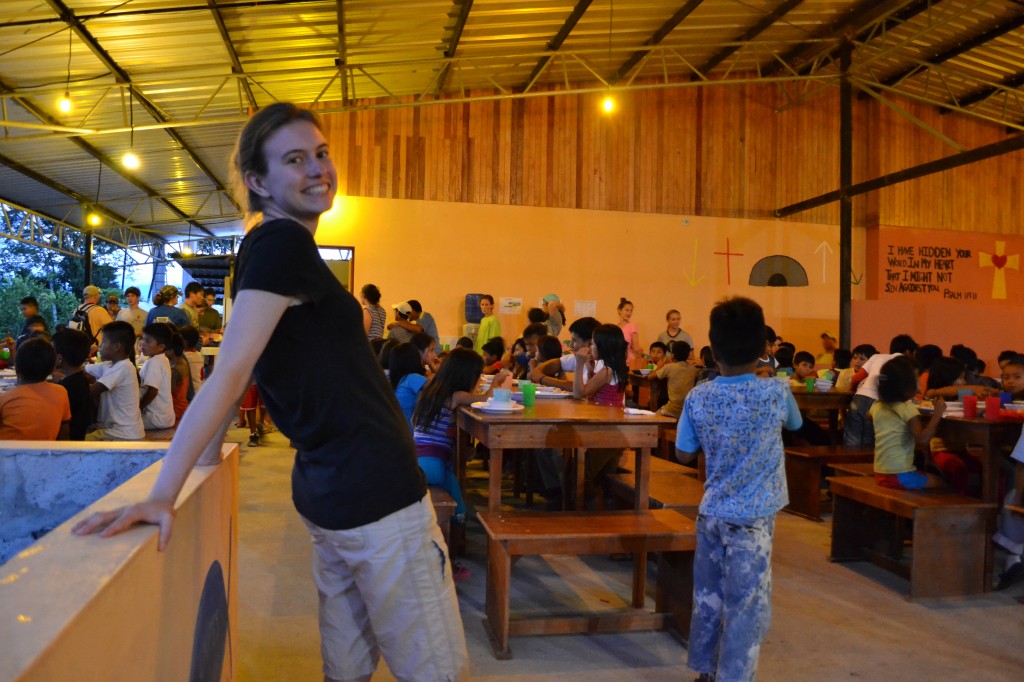 The camp differed from American programs again in that it opened wide chunks of time for playing and befriending. 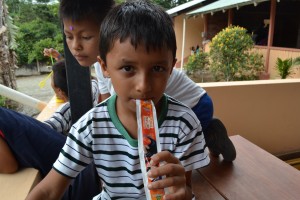 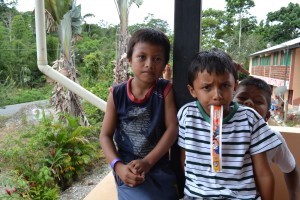 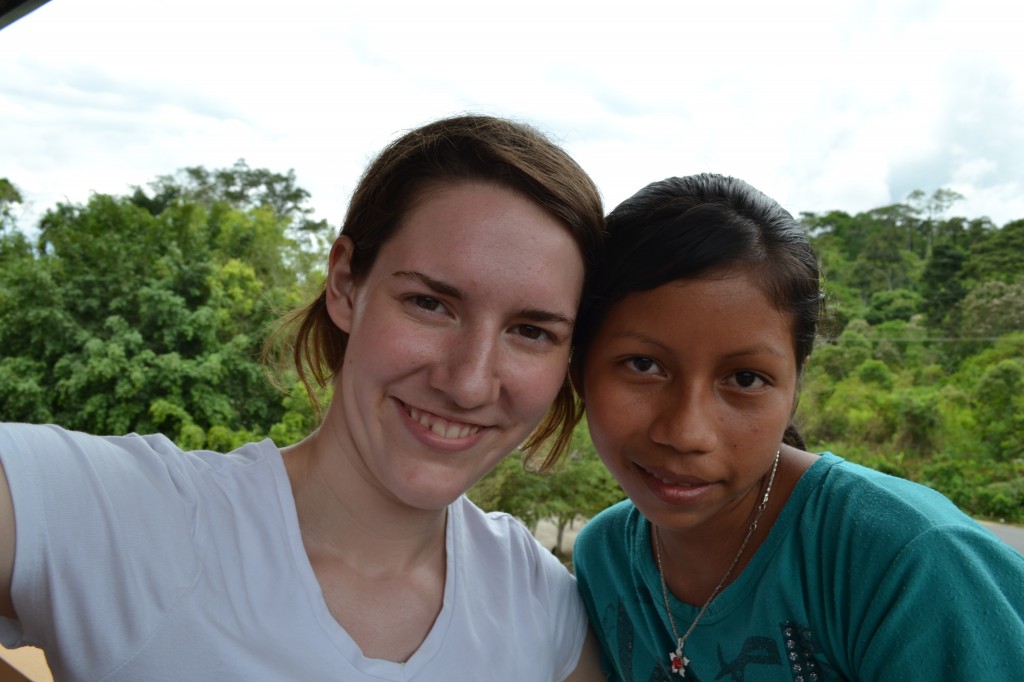 My best friend from camp, Jhojandra, taught us Quichuan vocabulary — and dance moves! 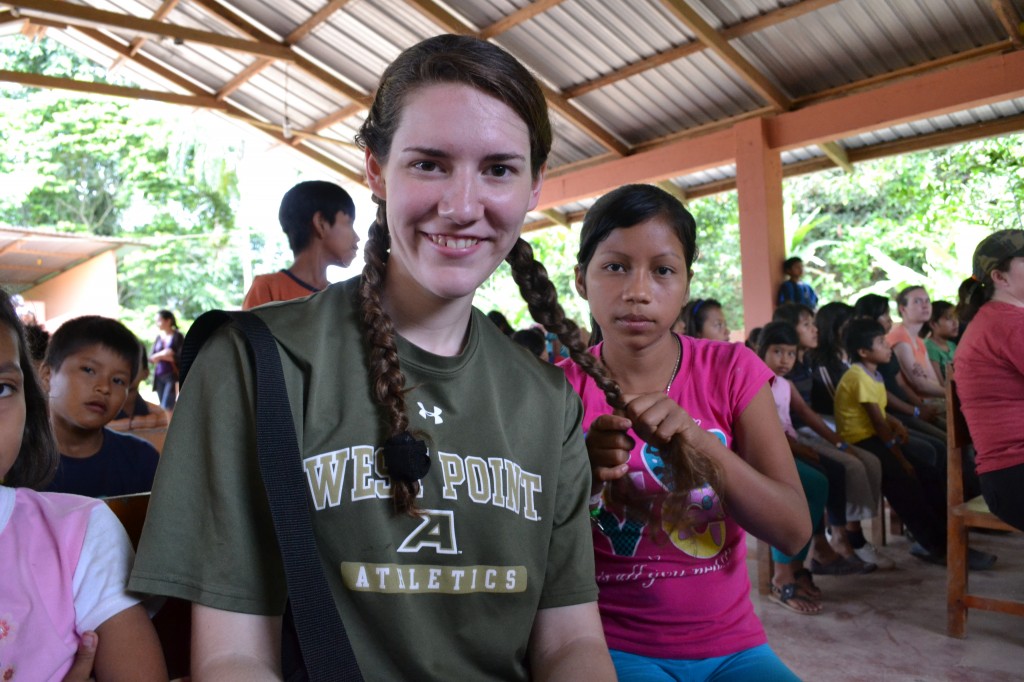 That first day taught me that I had carried two different passports into Ecuador: One in a little blue booklet, and the other inside my mouth. The booklet swept me in through customs, but my Spanish penetrated people’s hearts — and it worked in both directions.  I learned the girls’ ages, and I learned their names — once they wrote them down.  My journal came to serve me as limited subtitles for the kids: Whenever listening failed me, I could rely on our shared alphabet to decipher their words. The girls loved drawing us pictures, writing out Bible verses… and misspelling my name in various creative ways, including “Quatty.” 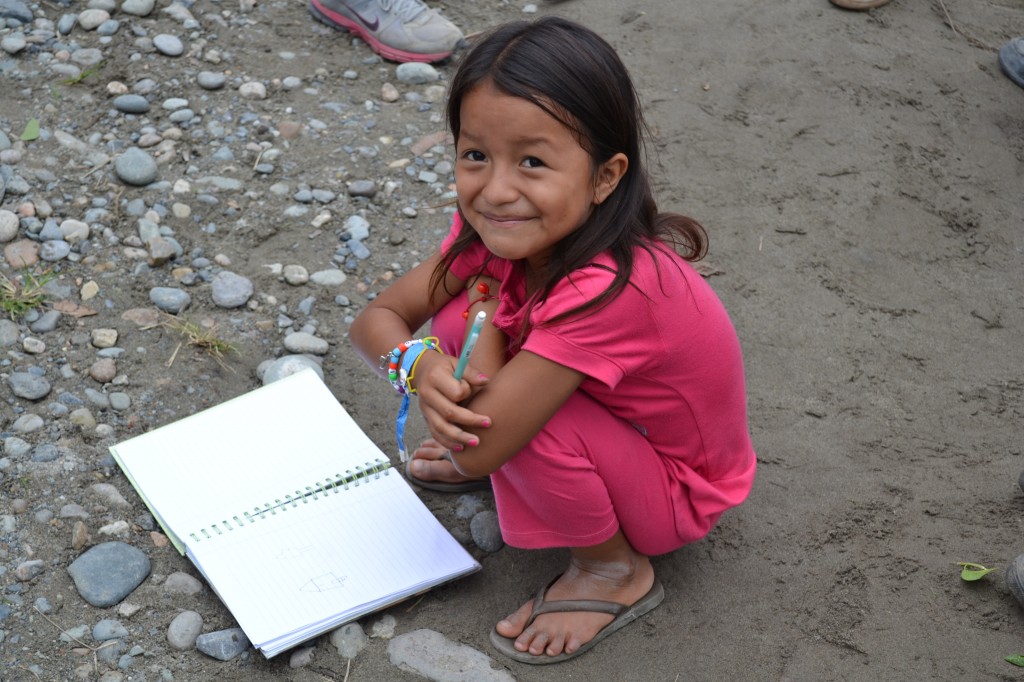 Grace, the darling of the camp. She pronounces her name, “GRAW-say” 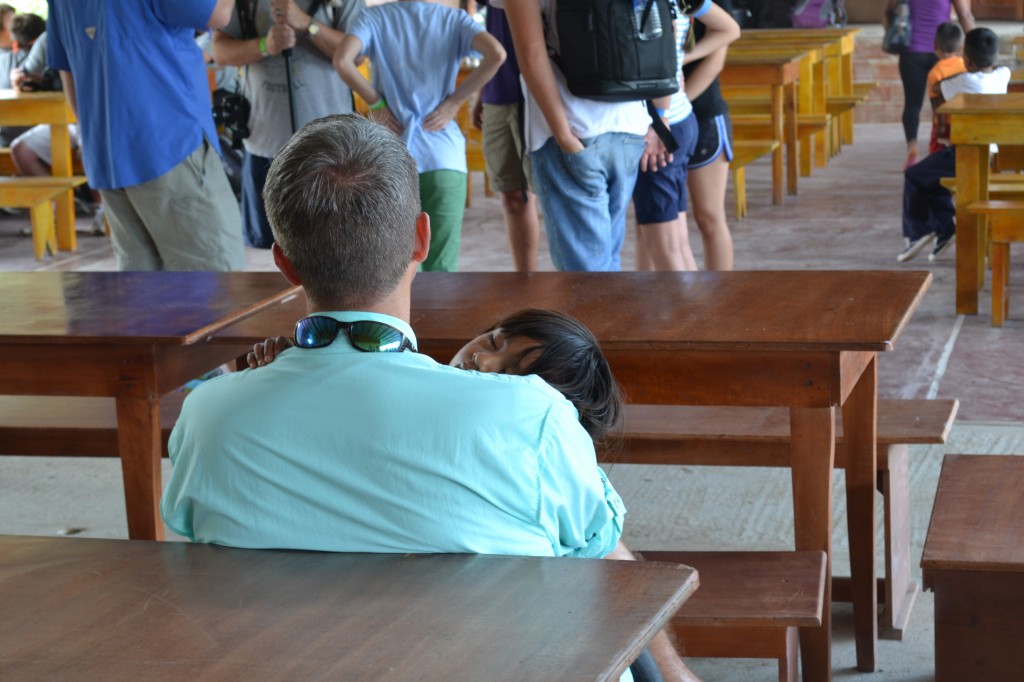 The English-only volunteers found other ways to connect with the children, though