The Adventures of Quatty, Act I

Note: I returned home Thursday morning, August 15th, after a red-eye flight — safe but sleepy (and fully recovered from food poisoning!). My thanks to everyone for their prayers and support during the trip. Many photos and stories remain, so I plan to continue updating the blog through my journey’s conclusion.

Note 2: I struggled to finish this post — hence the two week plus delay in updating — and it nearly finished my instead.  I credit my sister with the spark that finally kindled this saga of church camp.

Camp UNPES balances on a jungle hillside, splitting the gap between the highway and the river.  The name makes up a clever acronym, which I neglected to record for the ages.  (It involves uniting and evangelism.)  The site began as a one-room, tin-roofed training camp for missionaries. It has since expanded into a facility with dorms, showers, kitchen, cafeteria, and a swimming pool, plus a neighboring building for worship.  It now hosts a mash-up of Vacation Bible School and summer camp.  From July 21 – 24, it housed over 200 children and another 50-odd staff and volunteers for three nights and four days. 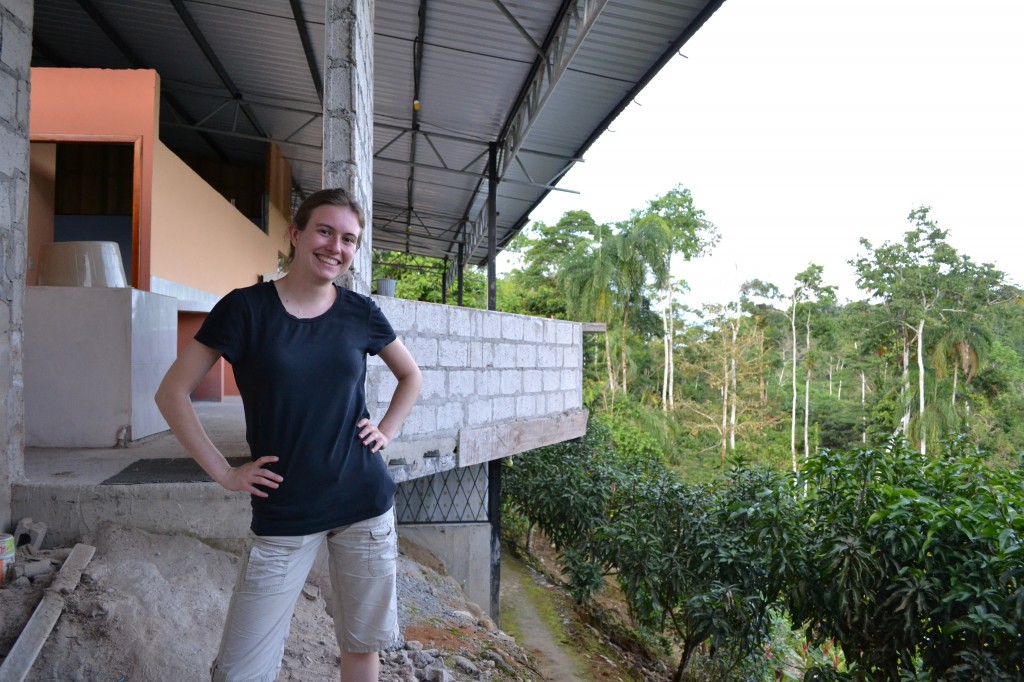 Rachel and I gleaned much of this information at the conclusion of our stay, while idling away a half-hour with Pastor Jorge (the man missing from the last post).  When we made contact with him Sunday afternoon after the brief excursion to Misahuallí, we confirmed that he would have room for us among the girls’ bunk beds.  He sent us to beg sheets and a pillow from his wife, who supervised the camp’s linen closet. 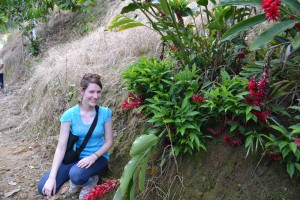 Flowers and fruit trees spring from the hillsides around the camp

Satisfied that we would be fed and sheltered and even (we all hoped) of use, Kevin and Beka hugged us good-bye.  They passed us on to Esteban, a young Ecuadorean recently married.  He and his wife Diana serve on the full-time Chacauco staff, which conducts Christian camps all over the country, spring through fall.  That week they conducted a program at this particular UNPES site, for the kids from the nearby mountain regions.  (I hope that clarifies the situation; I wore out my Spanish interrogatives, unraveling all the names and places.)

When Kevin and Beka explained our language abilities to him, Esteban exclaimed, “We have been praying for more translators!”  A sense of purpose alighted on me.  I recalled that the Chacauco invited missions teams from American churches to shepherd and care for the children each week. The full-time staff, and most of their summer interns, managed in both Spanish and English, but the short-term volunteers rarely breached the language barrier. 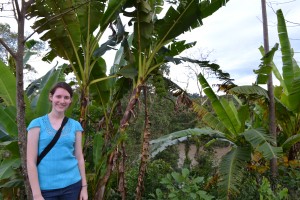 Fruit trees… including bananas!  See them, head level and centered?

Inasmuch as working with other Americans interfered with my hopes for immersion, the set-up at Chacauco hadn’t enthused me much initially.  Now I recognized an opportunity to answer a real need.  The pastor tapped Rachel and me for dorm mommies, because we spoke Spanish, and assigned us to distributing food alongside the Ecuadorean cooks.  We were to report to the kitchen the next day, at 7:30am.

Rachel and I secured copies of the camp schedule, but it had little direction for us until dinnertime.  Meanwhile, children flurried about us like glitter in a shaken snow globe.  Jump ropes slapped the concrete floor and balls hurtled through the air, while volunteers slathered with face paint rode the waves of energy and excitement.  By mutual agreement, Rachel and I slipped outside to tour the grounds.

We weren’t the only ones to think of exploring. 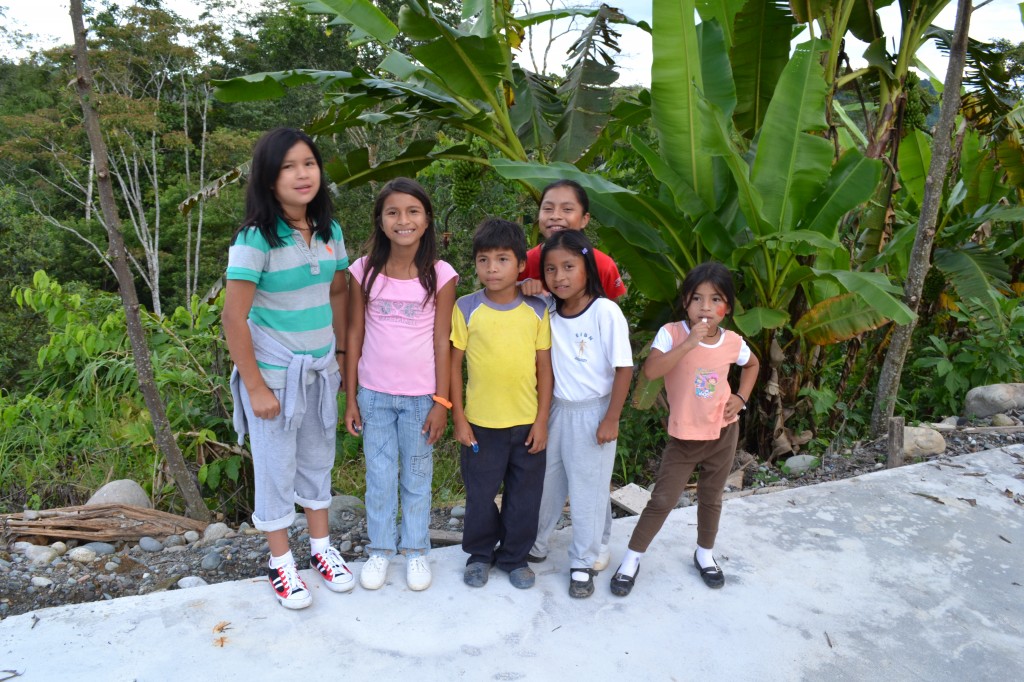 Behind these campers flows another vein of the Amazon

The children we met on the trail seemed shy with us, but they didn’t mind the camera.  I could say the same for the rather large insects we encountered. 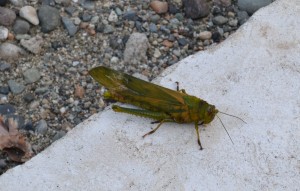 Back in our room, we counted beds and then sat back in expectation of 14 or so girls.  They came… and kept coming.  Little had we guessed that they would sleep two to a bed!  Plus, we had overlooked a loft with four additional beds.  When the fluffy blankets and pink backpacks had settled, Rachel and I had charge of almost 30 girls.  Their ages ranged from 5 to 13 — a spread that staggered me.  Thank the Lord, an Ecuadorean lady and a grandmother joined us in the room. 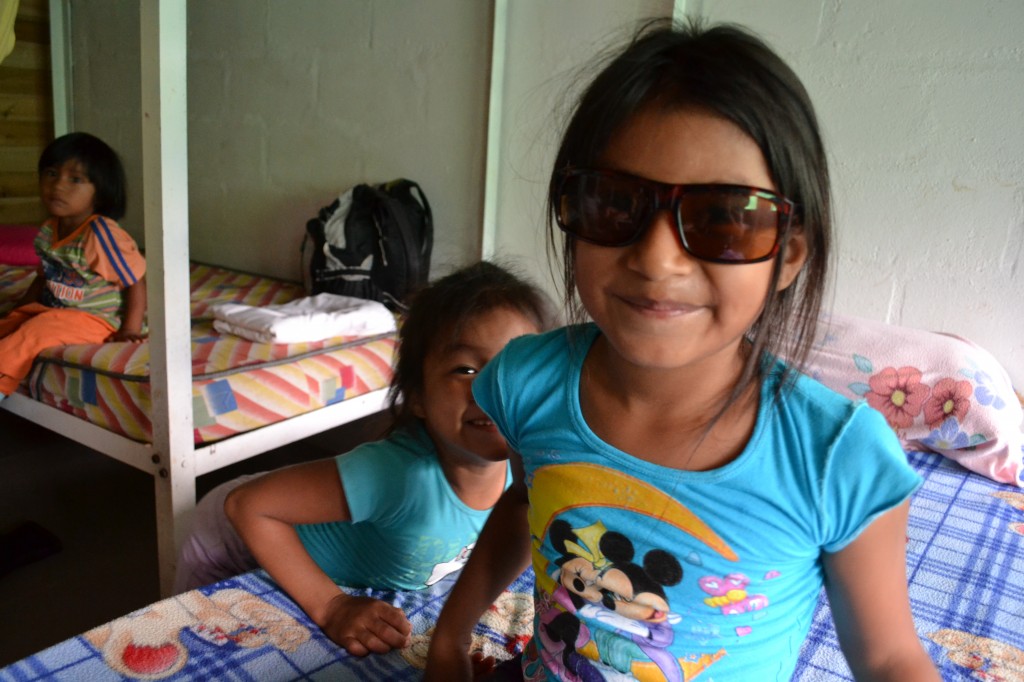 I lent out my sunglasses… 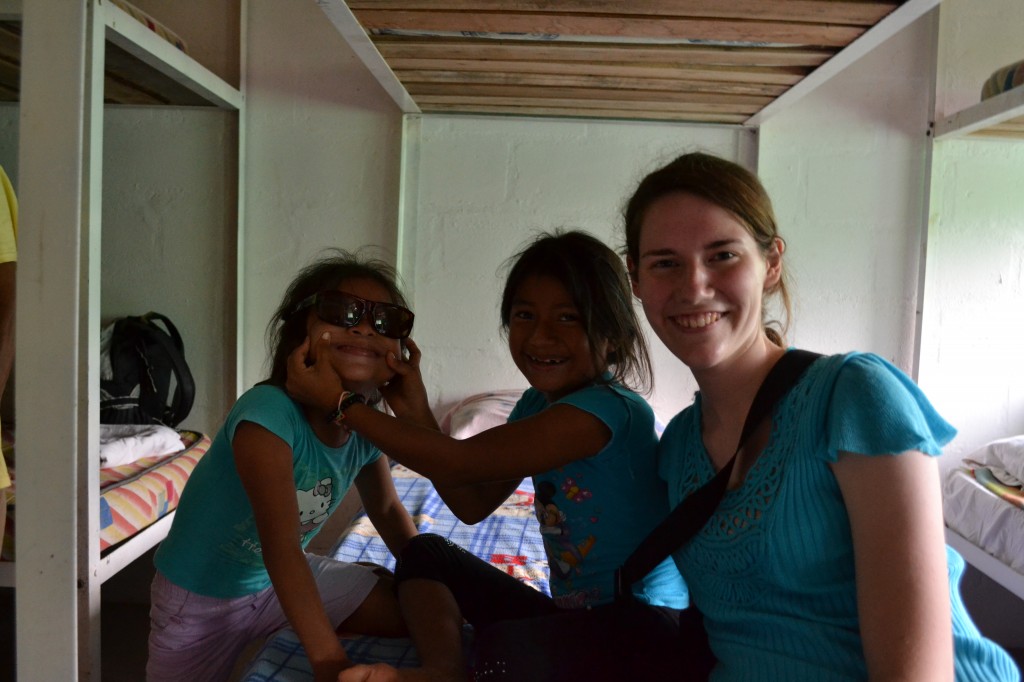 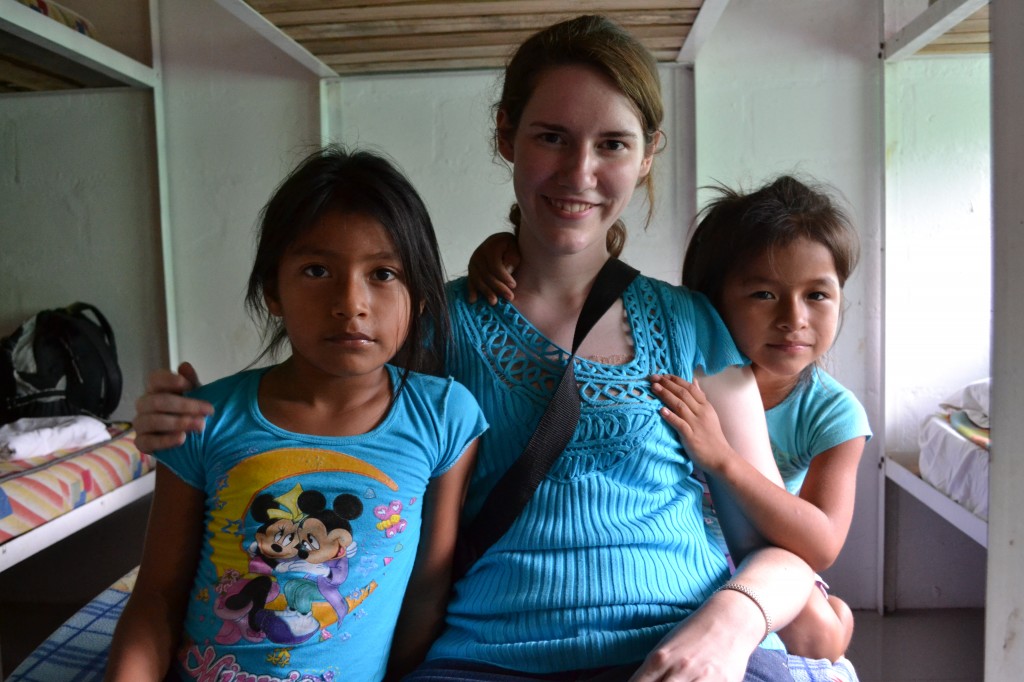 Ecuadoreans don’t smile much for photos… 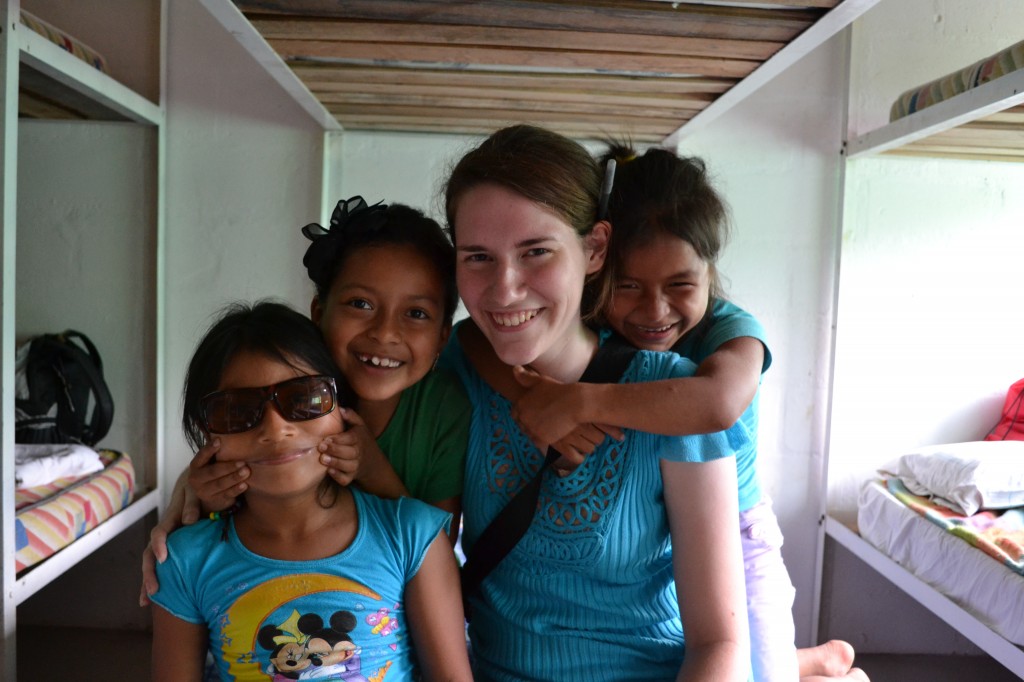 …but the girls warmed up to me.

Tune in for the next post to discover why I am spelling my name ‘Quatty’! 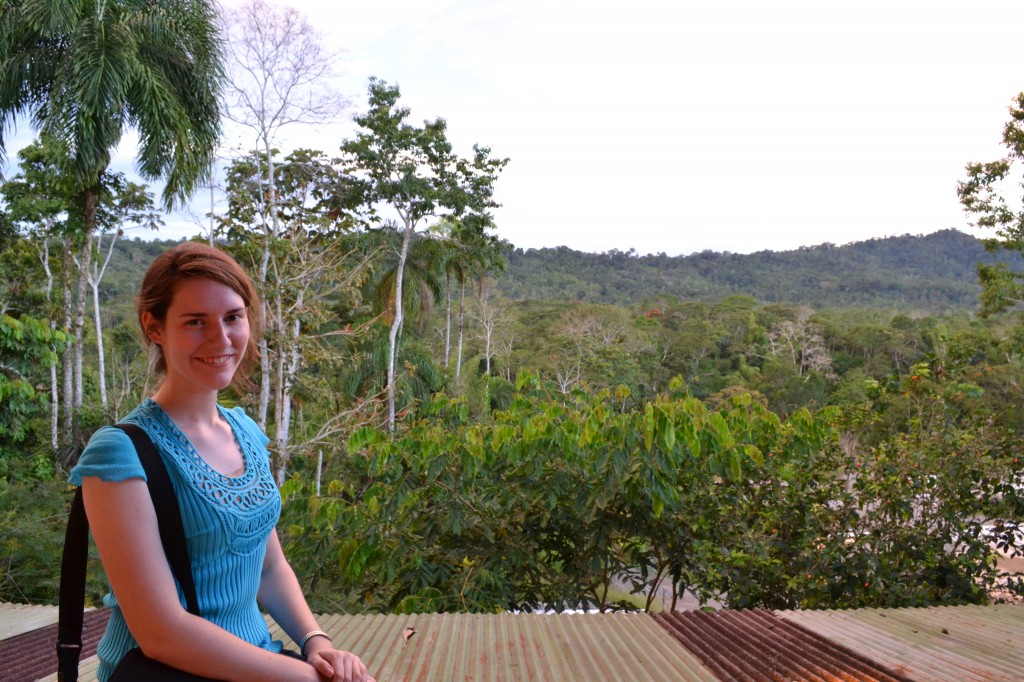 The view from the cafeteria