Losing four hours of sleep. Disturbing the locals. Exposing myself to long grass full of snakes, ticks, biting ants… Any number of difficulties might have dissuaded me. I even dreamed that the leader of our small expedition had appeared in my room in the earliest hours of the morning to cancel our expedition. Still, when 4:30am arrived, I awoke and forsook my bed.

We hiked west, out of our mountain hotel’s courtyard, down a dirt road, and into the hills. The call to prayer wailed at us, and the moonlight wept on us, but the hilltop beckoned us on. The clocks had not yet struck 5 am.

The Turkey trip traditionally climbs Mount Nimrod to welcome the rising sun. Yesterday the quiet town of Bogazkoy had enchanted one of our number, however, so she organized a party of early risers to scale one of its peaks. Meeting at 4:45 am? I doubted my eyes would open at that time, let alone guide my body out the door and into the fading night. Still, there I was.

We abandoned the dirt road partway through the climb, relieved to discover a path trodden through the grass. I trailed the group up the slope, thinking about blood-borne diseases. I had eschewed pants in favor of a lighter suitcase, and melodrama lends itself to sleep-deprived minds. It’s too late to worry now, I sighed.

We crested the peak long before the sun attempted the same feat. The Turkish hills with their red-roofed villages rolled away to either side of us, eliciting murmurs of delight. Camera shutters were snapping away, but I held mine. I was waiting.

In the quarter hour at the sun’s waking and sinking, God has blessed photographers with what I call rose-light. It fades so swiftly that landscape photographer wake hours before their appointed shoots in order to capture it, because rose-light gilds the land like gold and transforms every photograph into a masterpiece.  Nothing compares to its warm, soft pink color. Halfway to the hill, it had–well, dawned on me that our expedition would encounter not just the rising sun but also the gift of that light.

We spent two hours atop the hill. We perched on rocks and pretended to swallow the moon. One girl read a devotional aloud, reflecting on God’s limitless blessings. When the sun arrived, rising almost exactly between two hills opposite us,  we basked in its light. I snapped photo after photo, marveling at the glow. We came; we saw; we praised.

“You know, when I planned this, I was so afraid!” our impromptu leader exclaimed, as we picked our way back down into the valley. “I was afraid that… that the sun wouldn’t rise!”

“If that had happened,” someone replied, “I think we would have forgiven you.” 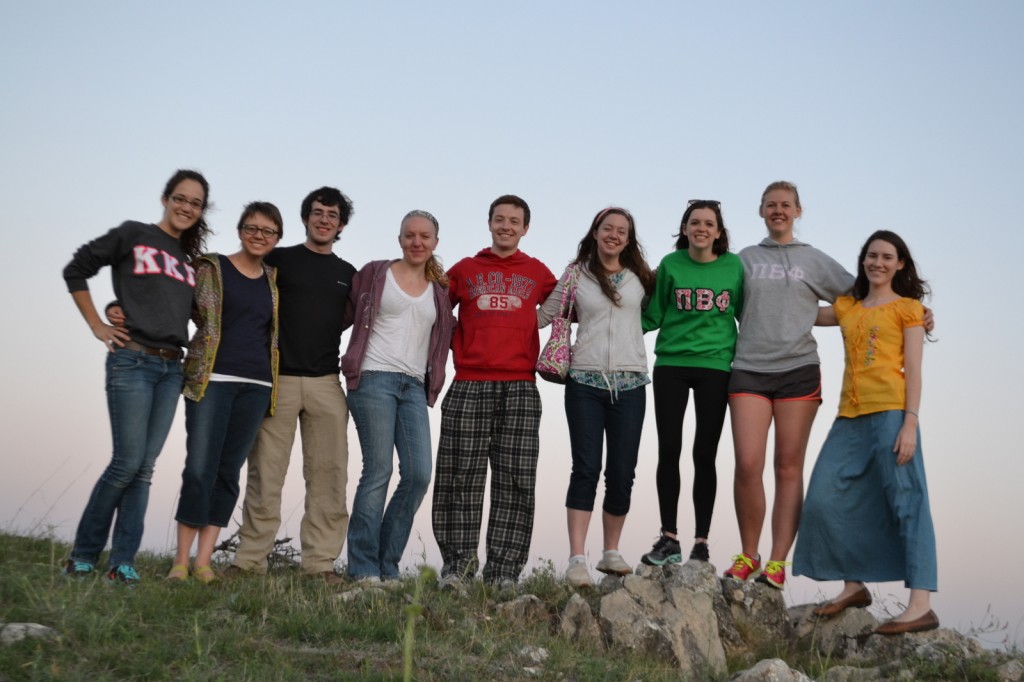