It was one of my self-reflective revelations, about the time I graduated college, that not everybody enjoys cooking as much as I do. For some reason it had never occurred to me before that there were alternative perspectives on the subject.

Cooking has entertained and invigorated me for many a hour, many early mornings, and several late nights, since I first learned to mix a batch of brownies for my elementary school friends. This might come as a surprise to my community here in South Africa, since they are all more or less convinced that their young American guest is incapable of cooking or at least deathly afraid of it.

It’s true that I haven’t cooked as much as I imagined I would. In my defense, my facilities are limited. My kitchen consists of a desk squeezed in the corner of my apartment, sporting two burners and an electric kettle for my appliances, with a single pan and diminutive pot as my tools. That put a kabosh on my plans for showering family and friends with goodies, but I was determined that no oven did not have to mean no baked goods ever. 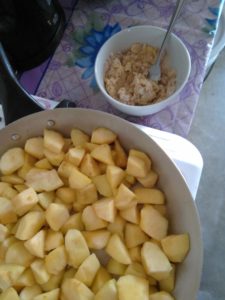 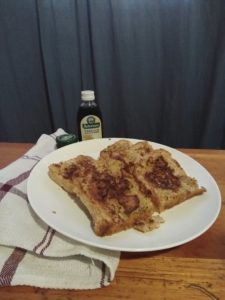 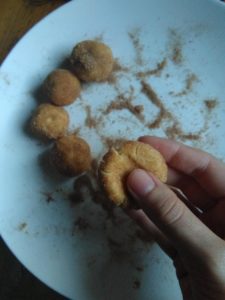 With eggs, cinnamon, and milk populating my pantry, classic French toast promised an early win. Emboldened by my success, I graduated to apple crumble: flour, sugar, butter… all these ingredients are available at the wholesale less than a ten minute ride down the hill. 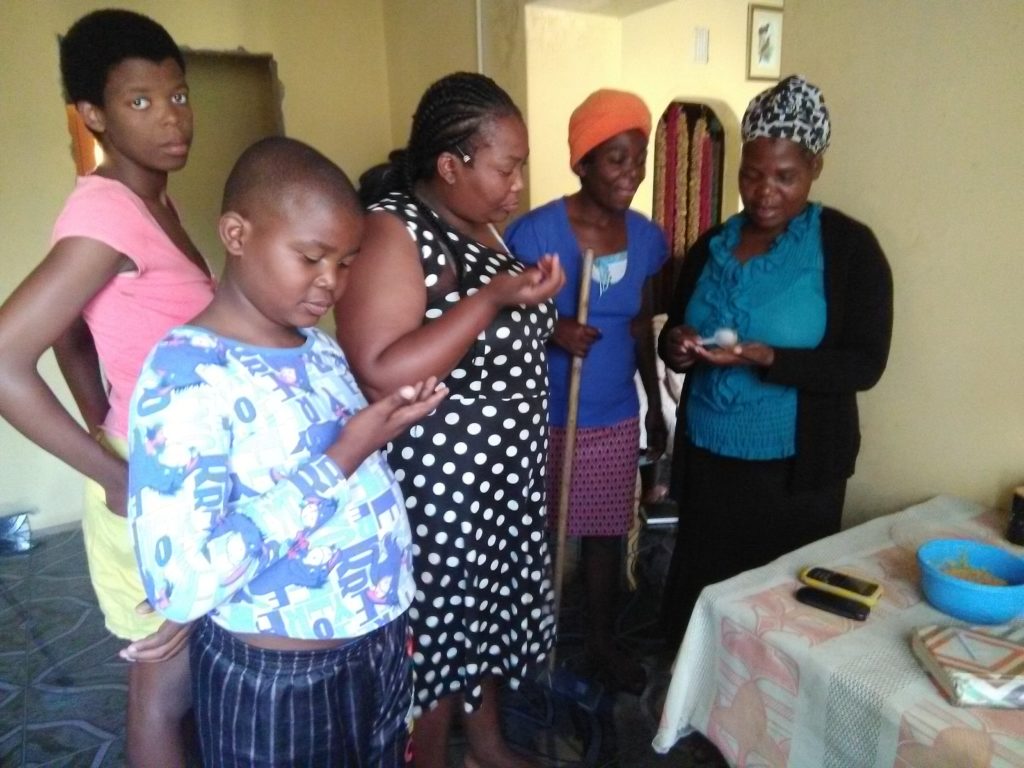 With the South African climate swiftly warming to summertime, a gooey autumn treat couldn’t satisfy my palate for long. I enlisted the help of my mother, recipe hacker extraordinaire, to google me a creative method for converting more conventional desserts into stove top confections.

The cinnamon-coated cookies pictured above were the result. It’s a good thing that baking in a miniature pot atop an electric burner results in scores of tiny portions because I gobbled at least half a dozen before they had finished cooling. The recipe was scrumptious, but even better was my gleeful reply whenever someone inquired what to call them:

It soothed my neophyte Zulu speaker sensitivities that pretty much nobody attempted to reiterate this gem of English vocabulary. 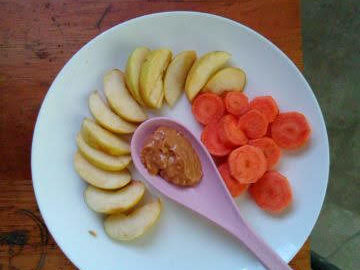 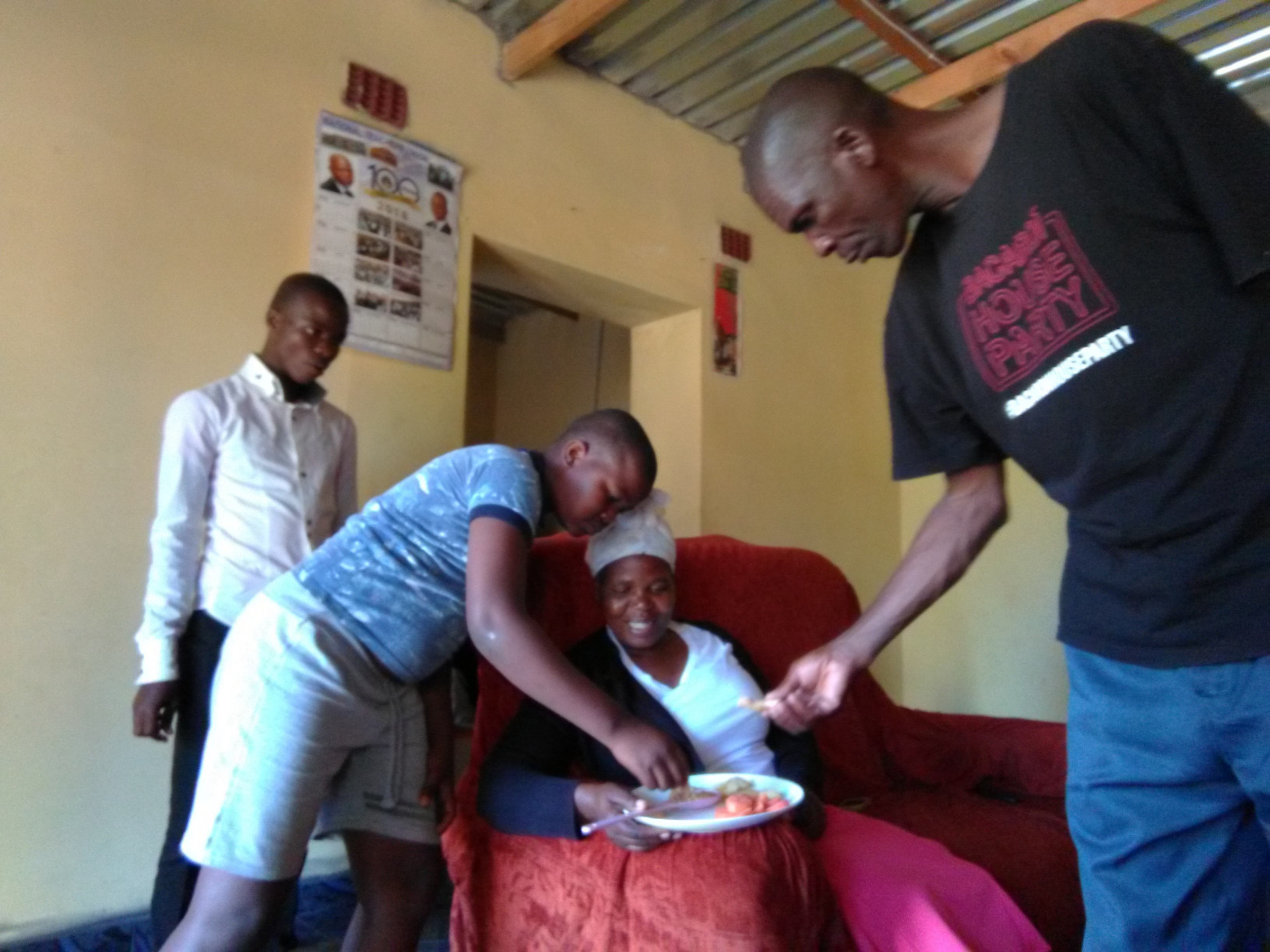 Apparently the combination of apples and peanut butter does not delight the South African palate. My host father, an unfailingly gentle and courteous man, excused himself and returned with slices of bread. These he judged much better suited to accompanying peanut butter than fruits and vegetables.

It surprised me to discover that peanuts are a popular ingredient here in soups and sauces. Umama gave me a taste of how they prepare these dishes, starting from a bag of raw nuts. The chickens were delighted to participate by snapping up the bits that escaped her man-sized mortar and pestle. 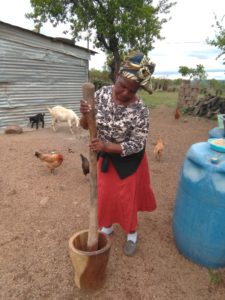 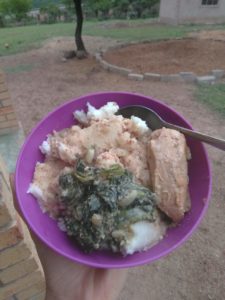 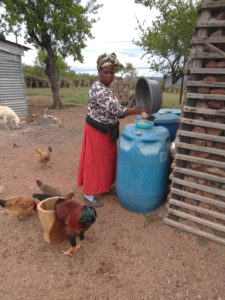 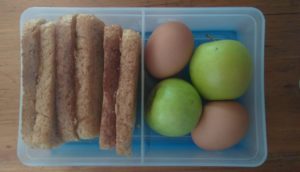 These one-pot African meals are mouthwatering, especially with a helping of their homegrown spinach.

Left to my own devices, I generally content myself with geometrical, after-school style fare: boiled eggs, apples, and classic PB&J (never have I eaten so much peanut butter and jelly as I have since arriving here), wedged between brown bread fried in sunflower oil.

The sunflower oil is not an indulgence on my part – it’s what the stores typically stock instead of canola or generic “vegetable” oil. You won’t catch me complaining!

Admitting to this diet at an unguarded moment is why, by the by, my South African friends now consider me hopelessly handicapped when it comes to feeding myself. Maybe I’ll convince them otherwise if I succeed at perfecting this modified double boiler maneuver for baking miniature cakes atop my hot plates: 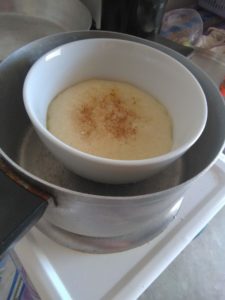 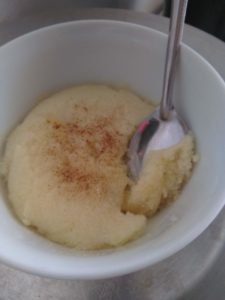 Wish me luck and bon apetite!