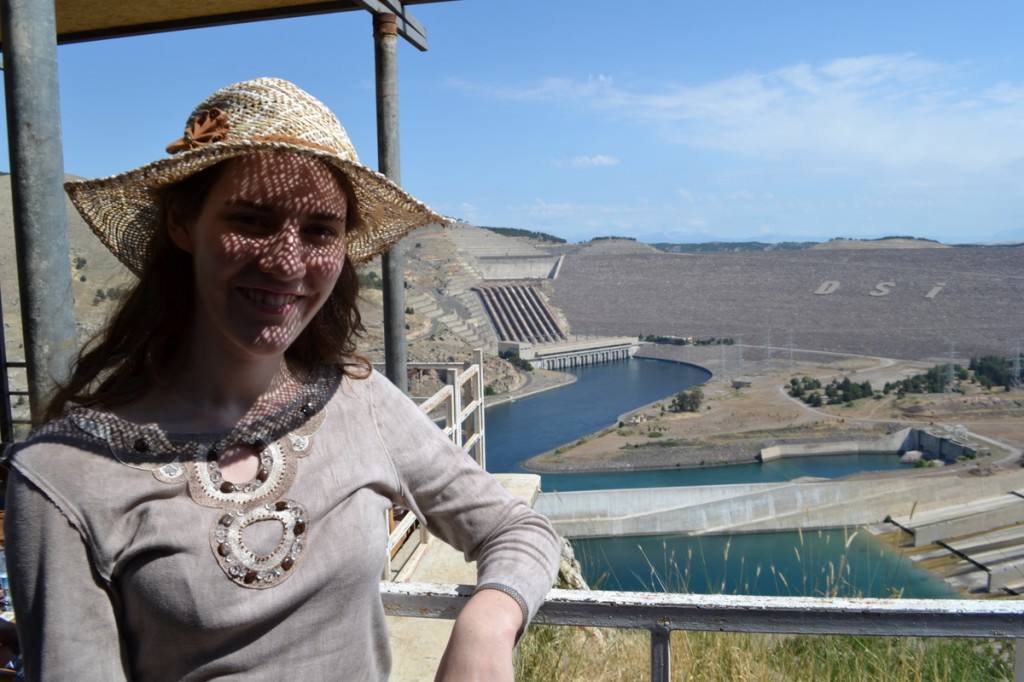 This dam provides for some impressive proportion of Turkey’s electricity needs, in honor of Ataturk, of course 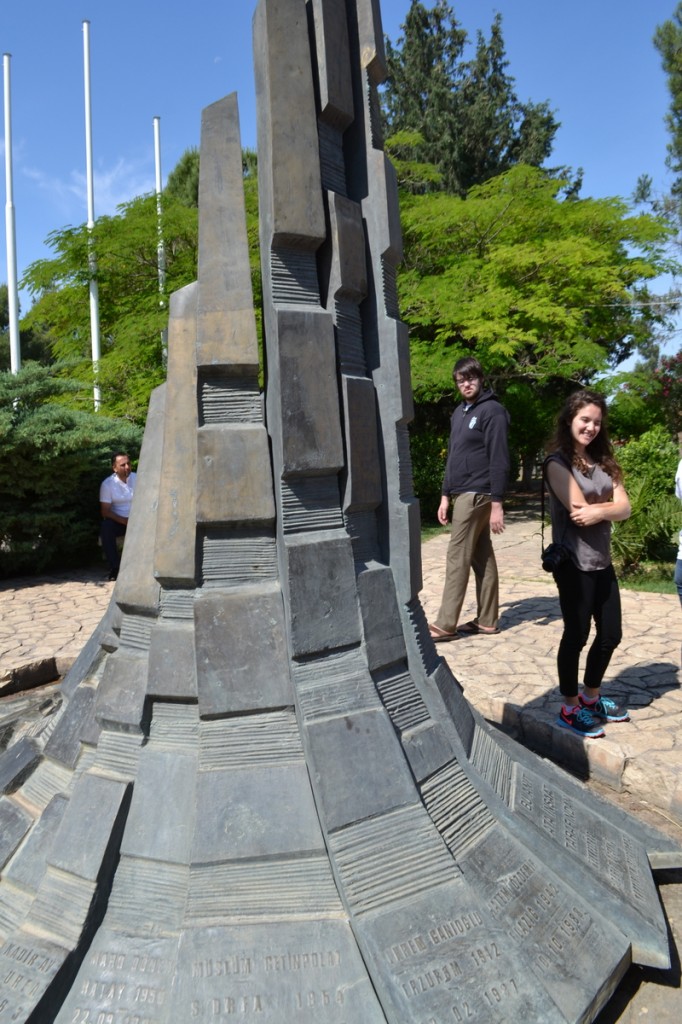 A monument for the men who perished while constructing the dam. It startled some of my classmates who hadn’t considered that people die in construction projects 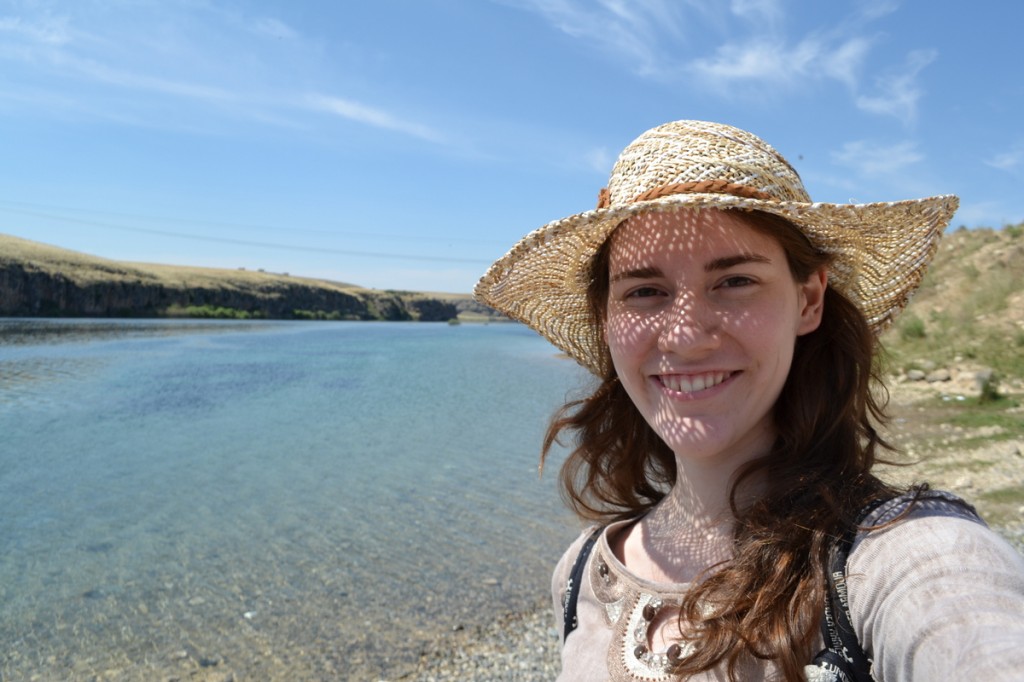 The Euphrates! We skipped rocks and froze our toes in the shallows 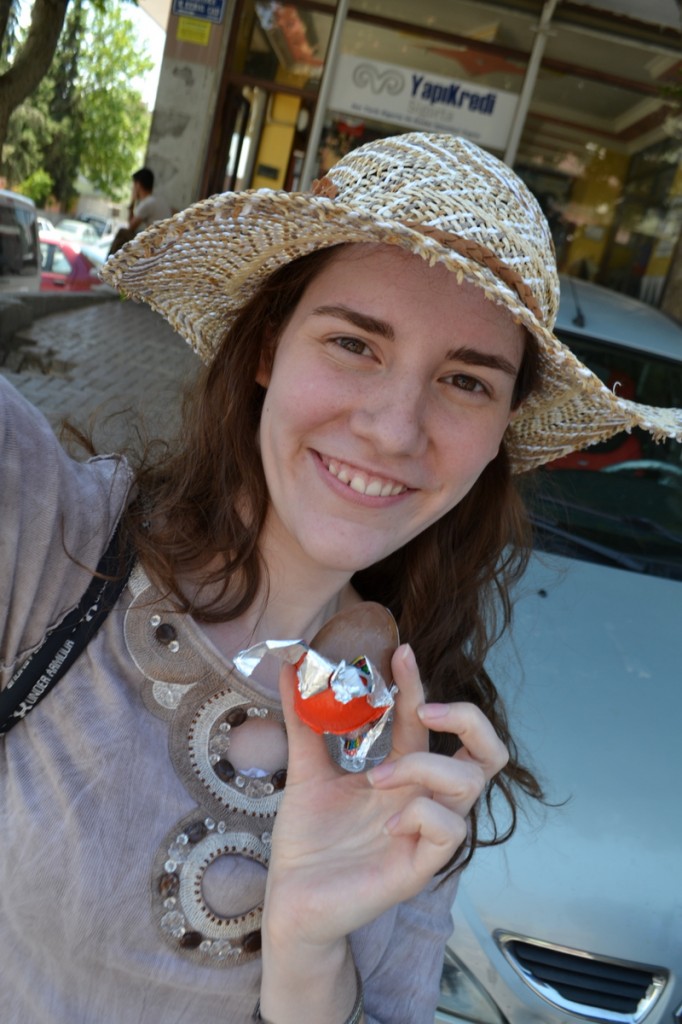 I found treasure in a tiny grocery store: chocolate Kinder eggs, gems from my childhood in Europe. Back then, we needed all Daddy’s engineering skills to put the toys inside together 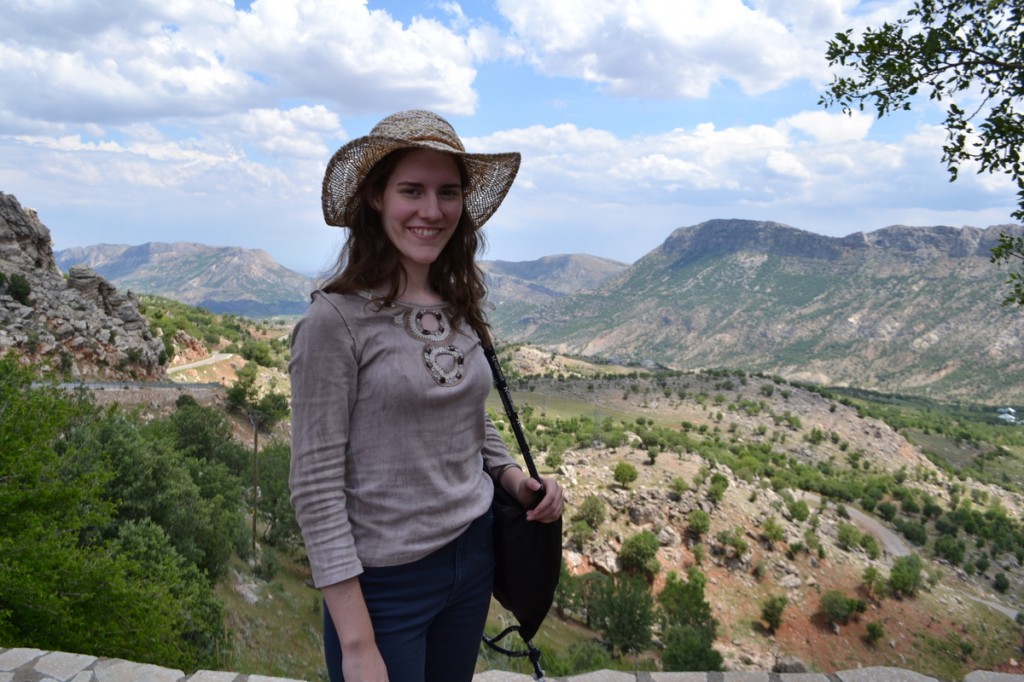 Given this view from our hotel’s terrace, I could forgive them for lacking hot water 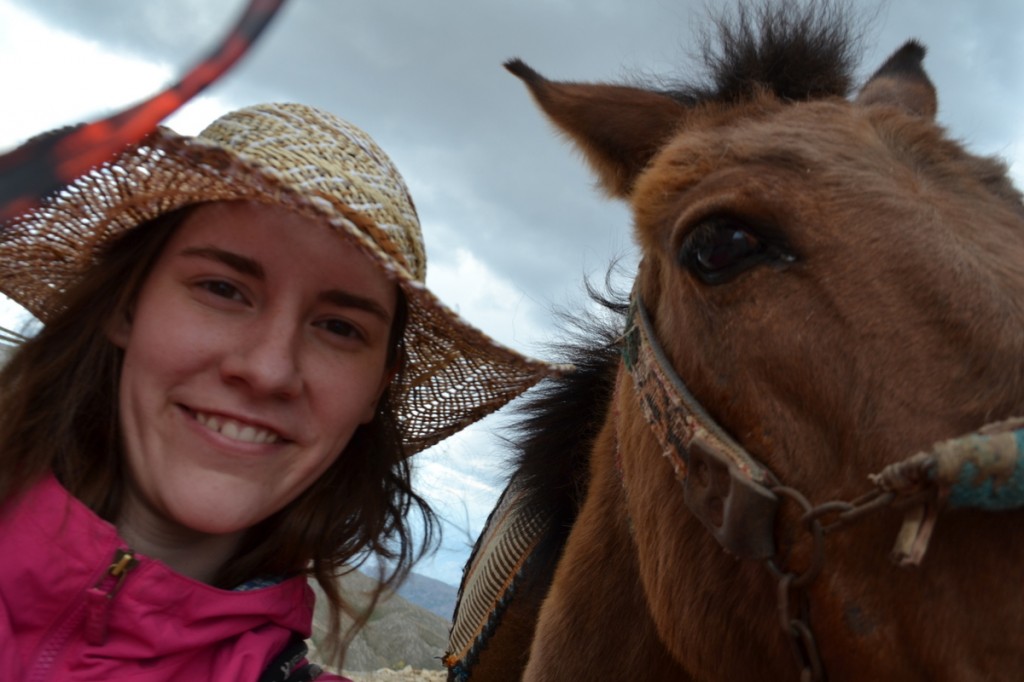 Is it a donkey? or a mule? Either way, I didn’t get to ride it 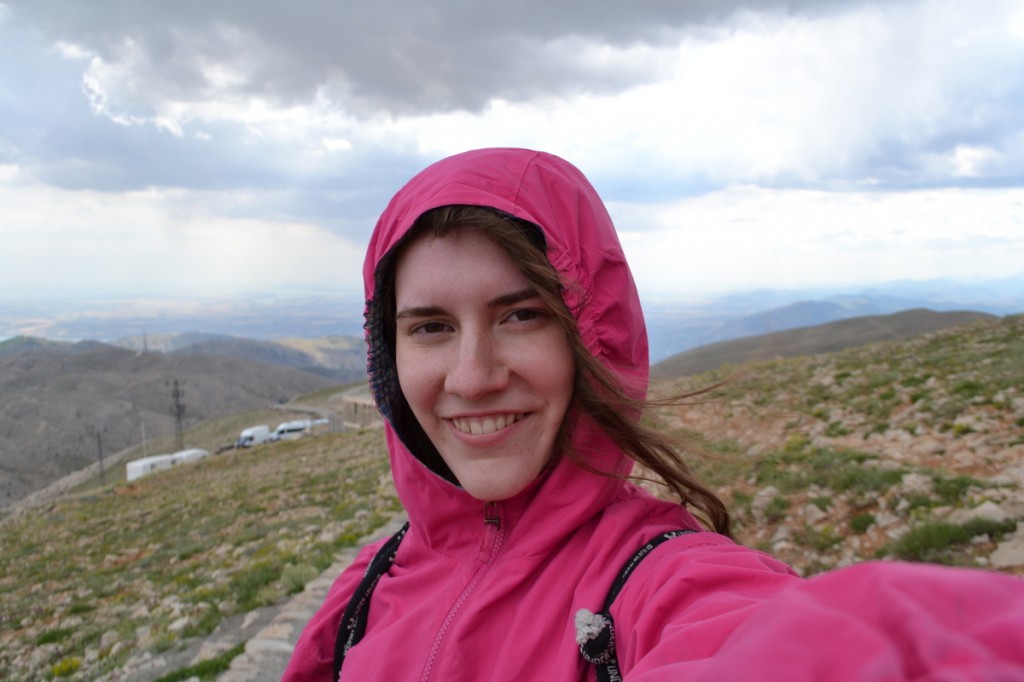 Our guide forecast rain for the hike up Mount Nemrut 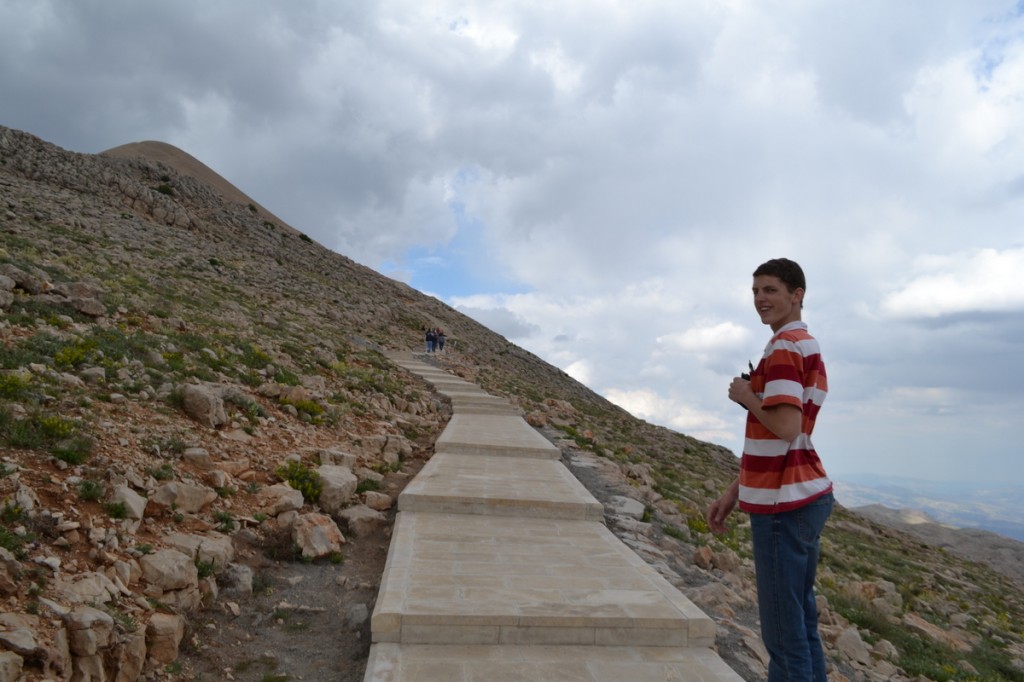 Josh, at the steps that hurried us to the mountain’s peak 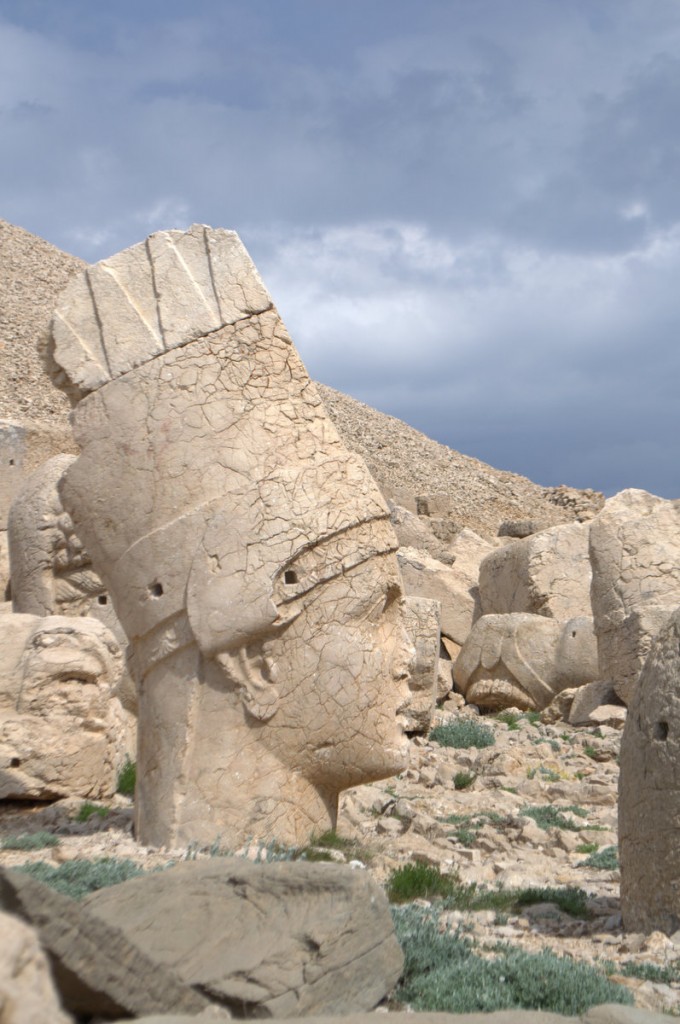 I met a traveler from an antique land
Who said: `Two vast and trunkless legs of stone
Stand in the desert. Near them, on the sand,
Half sunk, a shattered visage lies, whose frown,
And wrinkled lip, and sneer of cold command,
Tell that its sculptor well those passions read
Which yet survive, stamped on these lifeless things,
The hand that mocked them and the heart that fed.
And on the pedestal these words appear —
“My name is Ozymandias, king of kings:
Look on my works, ye Mighty, and despair!”
Nothing beside remains. Round the decay
Of that colossal wreck, boundless and bare
The lone and level sands stretch far away.’ 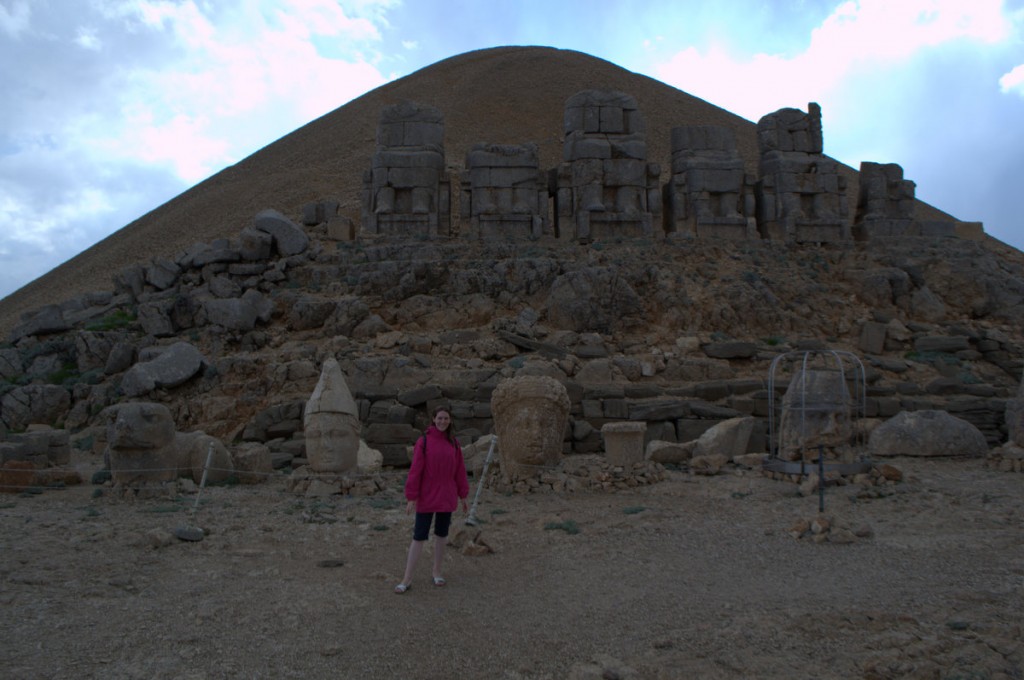 King Antiochus one-upped the Egyptians: By burying his tomb in gravel, he foiled even modern archaeologists from uncovering its contents 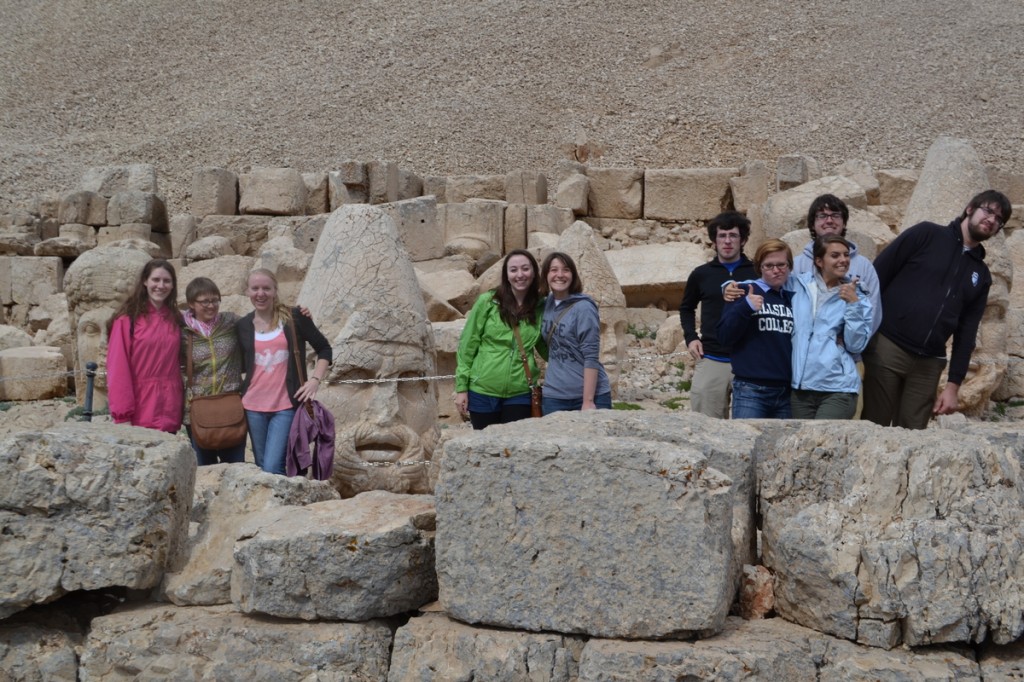 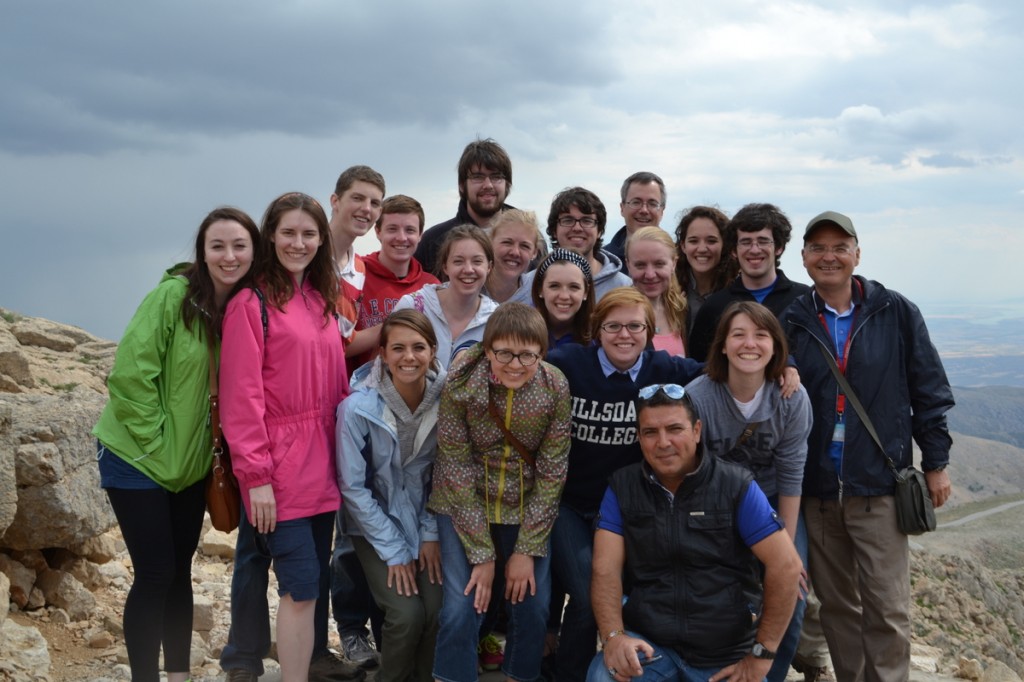 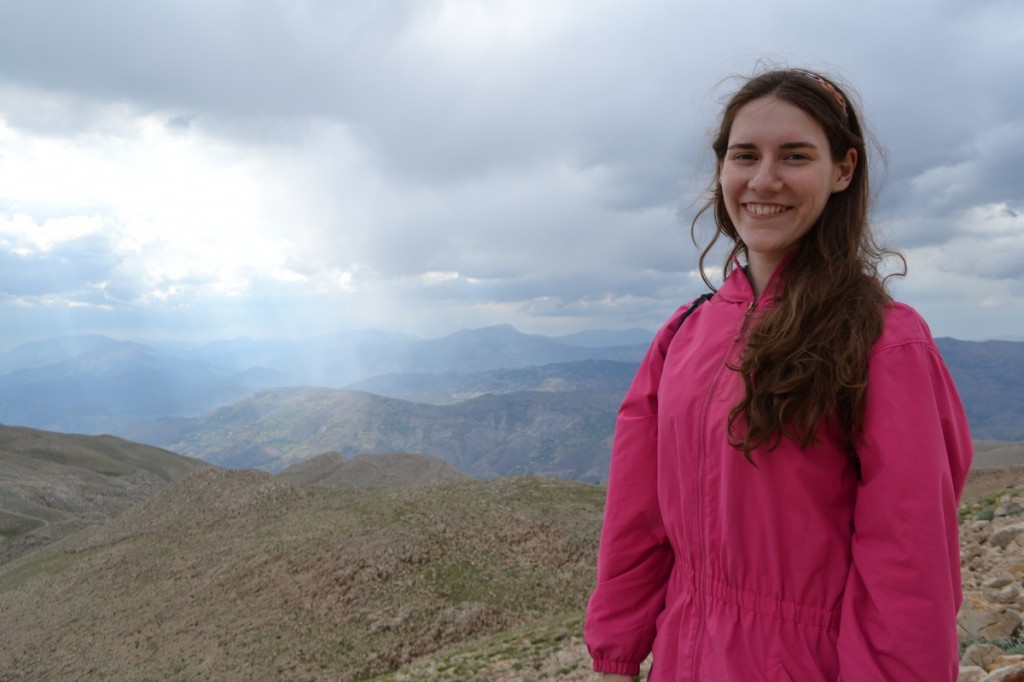 A bus waited near the peak to return us to the hotel, careening through hair-pin turns with other vehicles barreling the opposite direction, but four of us decided to hike back down on foot 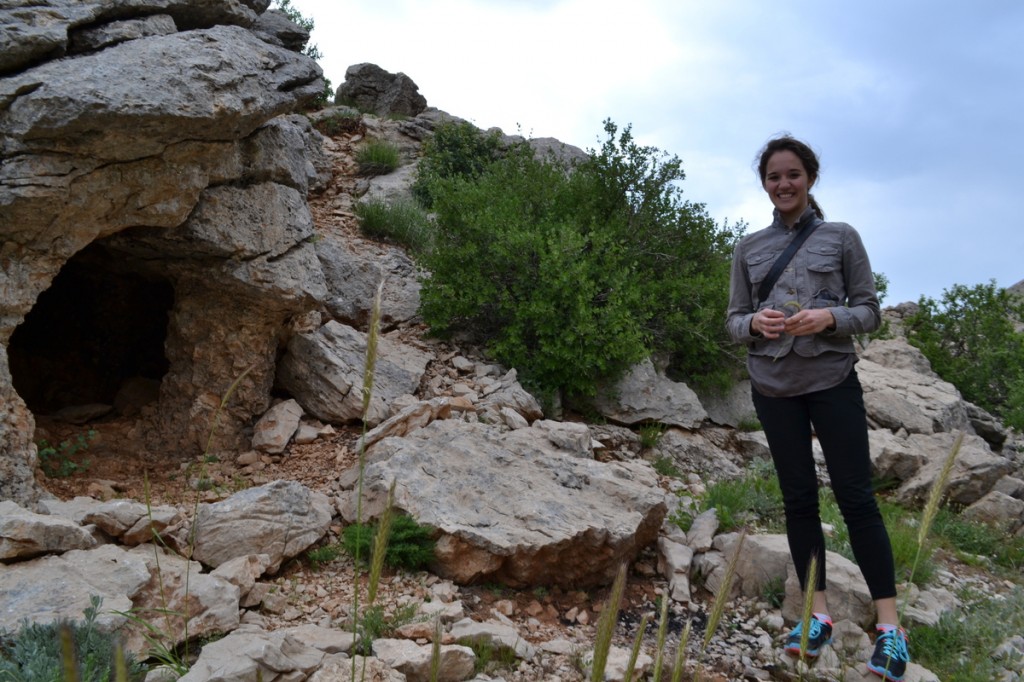 We investigated caves and thistles along the way, wondering aloud which muscles would punish us the next morning 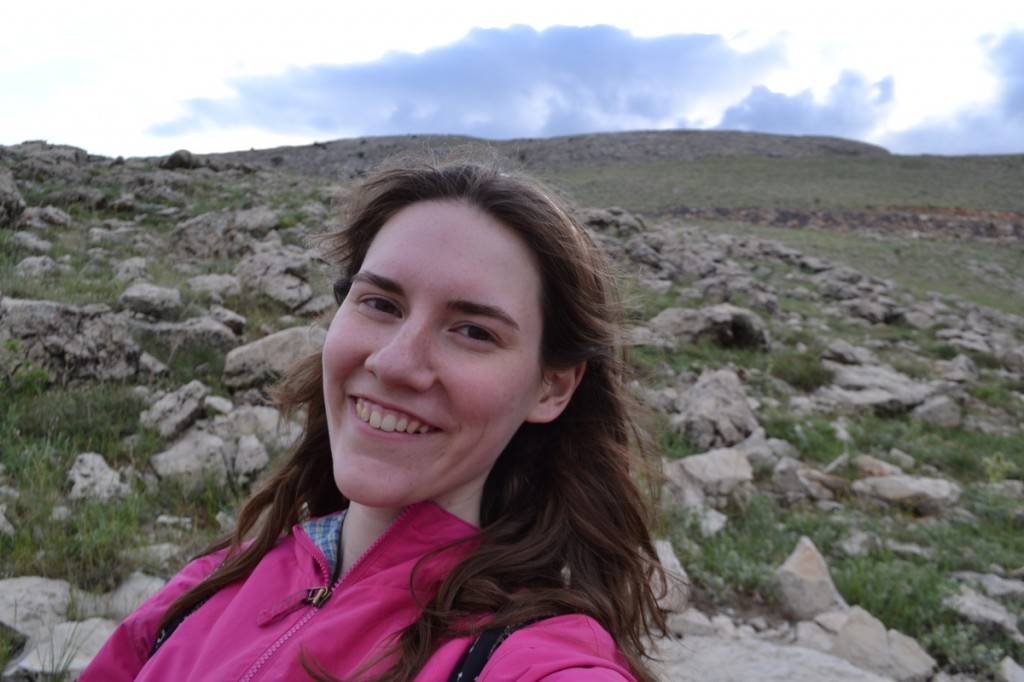 Hungering for still more adventure, we abandoned the paved road for a ‘shortcut’ through this rocky valley. I almost regretted not packing sneakers when I encountered the underbrush 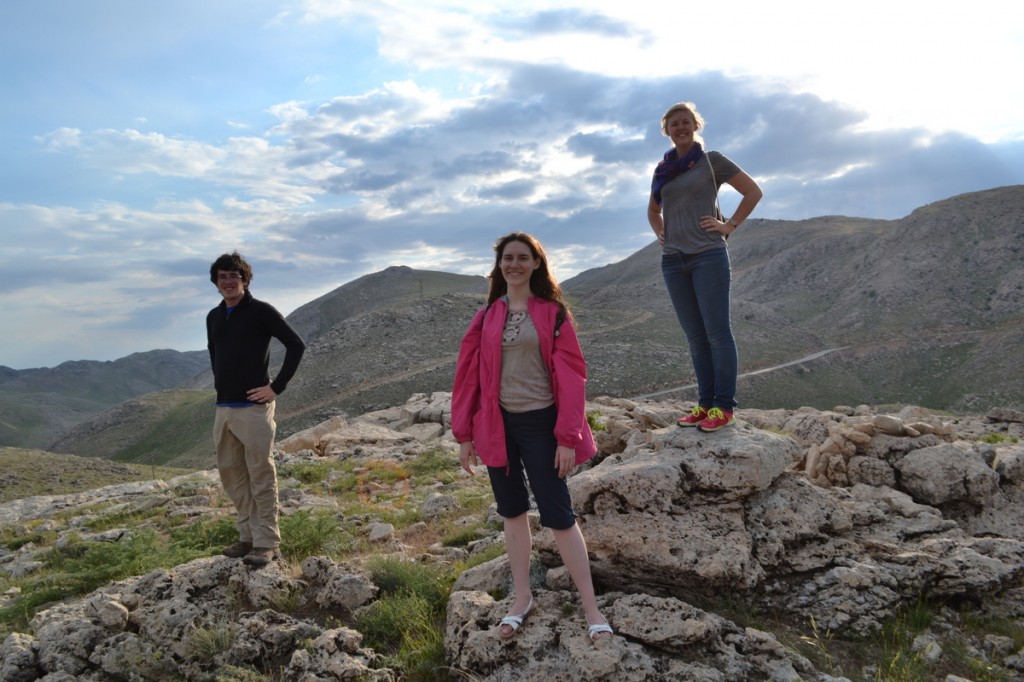 We scaled the cliffs at the valley’s opposite lip 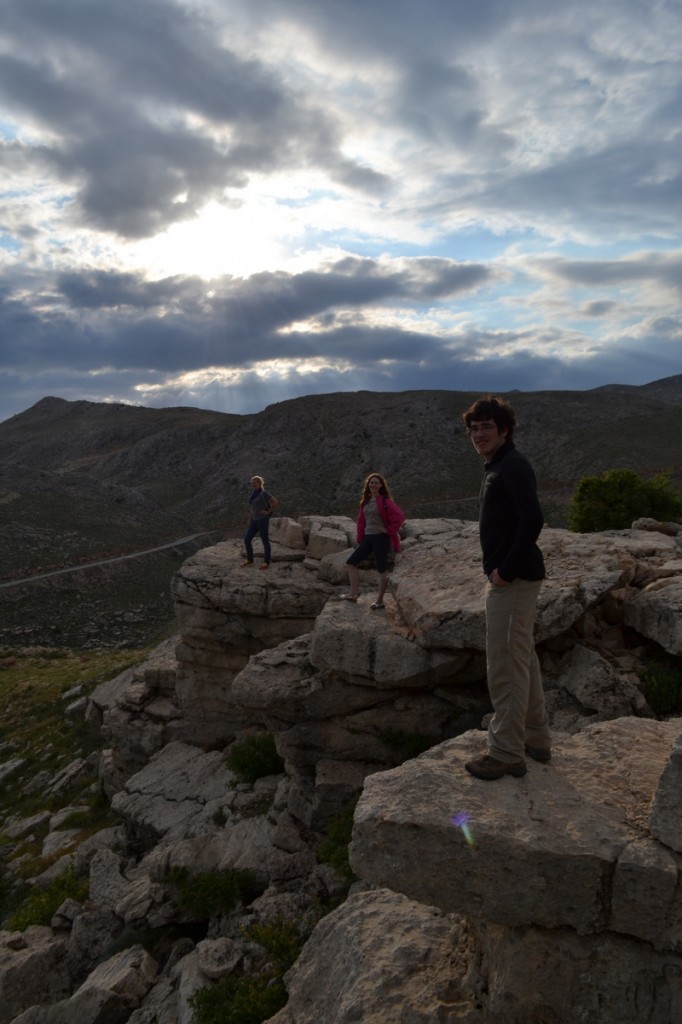 Annie and Caroline sang in harmony from these lofty heights, triggering an echo that bounced and spun through the rocks before fading

Friendly motorists and even a young herdsman with his family sped our journey with smiles and waves.  “Merhaba! Merhaba!” we greeted them in Turkish. 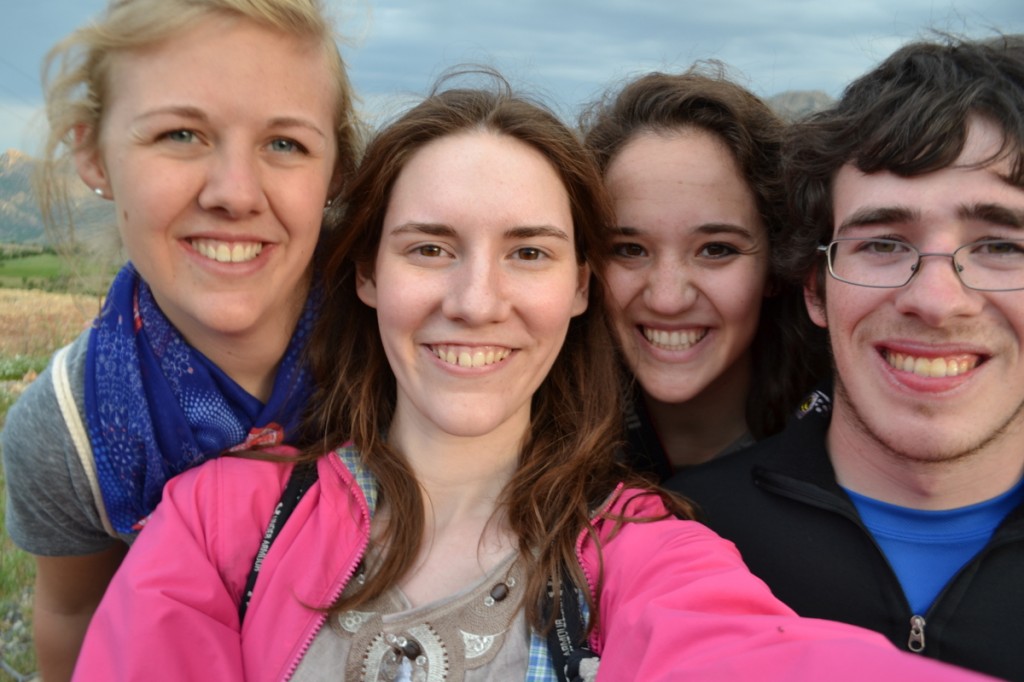 Our triumphant arrival! We hiked for nearly three hours

On our way into the courtyard, we heard the hooting and hollering of young adults at play.  Another tour group had passed us on the way back down the mountain, so we knew of two possible culprits. “Sounds like a soccer game. It’s probably the other group.”

“What do you think our friends are doing?”