Our guide loosed us on Antalya for a day of unscheduled leisure. I trailed our professors into Old Town, where vendors assailed us from every street corner. One man captured our attention with free samples of his candied nuts.  Prof. B shrugged and allowed him to fill a bag for her. “How much?” she inquired.

“Thirty-four,” he repeated.  “That is twenty-five, and that is fourteen.”

Prof. B tossed the bag of nuts back onto his cart and stalked away.  He wailed after her, “Thirty! No, how much you want to pay?” but he had squashed the golden goose: Her offense at the exorbitant price drowned any desire to haggle.

At the harbor, the sea breathed downy air on our faces, and a string of blue mountains flirted with us beyond the water. We indulged in coffee, tea, and peach juice at a cliffside restaurant overlooking the waters, then retreated inland to a locals’ haunt for $10 grilled calamari lunches. “Could it be more perfect?”

After lunch we embarked in search of a fabled bookstore. Bereft of street signs, we wandered through alleys arranged as if someone had dumped a handful of toothpicks and copied the resulting pattern onto the city grid.  We triumphed at last by backtracking to a more popular destination, Hadrian’s Gate.

The bookstore occupied three rooms, though one had ejected its books in favor of painting and construction equipment. Dust coated the shelves of paperbacks, which divided according to language. Our arrival at the bookstore opened the floodgates to the English/Canadian/Turkish helper’s tale of languishing seven nights in foreigners’ prison because she had overstayed her VISA. When the story prompted its deserved sympathy and polite agreement that she should write a book about it, the lady recovered her bashfulness. She fled the store exclaiming, “Ishmael, where are you?” I had just enough time to ponder who Ishmael might be before he exploded onto the scene: larger than life, well-bearded, and bearing a voice stuck on the parade ground setting. The bookstore’s owner, I surmised.

On my way to the door, I spotted a favorite read from high school, in manageable paperback size. “15 lira,” Ishmael informed me.

“Can you…?'” I gestured, but Ishmael played dumb.

“Lower the price? How about 7 lira?” He rolled his eyes and educated me on the quality of his product, but I protested that it had passed its prime. He wouldn’t budge.

“All right, not 7, but a better price than 15?” He offered 12. I countered 10. He bequeathed his attention elsewhere, collecting reading suggestions from our professors. I waited, book in hand. As the group verged on exiting, Ishmael waved a hand at me. “All right, 10 — take it and go.”

Will I ever grasp the ways of haggling?

Two hours had elapsed in our search for the bookstore and subsequent escape.  “Why did we go there?” I asked Dr. G.  Turns out the store had provided a connection for one of last year’s travelers that paved the way to his winning a prestigious award. It shouldn’t have been possible, Dr. G reflected, but the bookstore had proved itself “even stranger than described.” 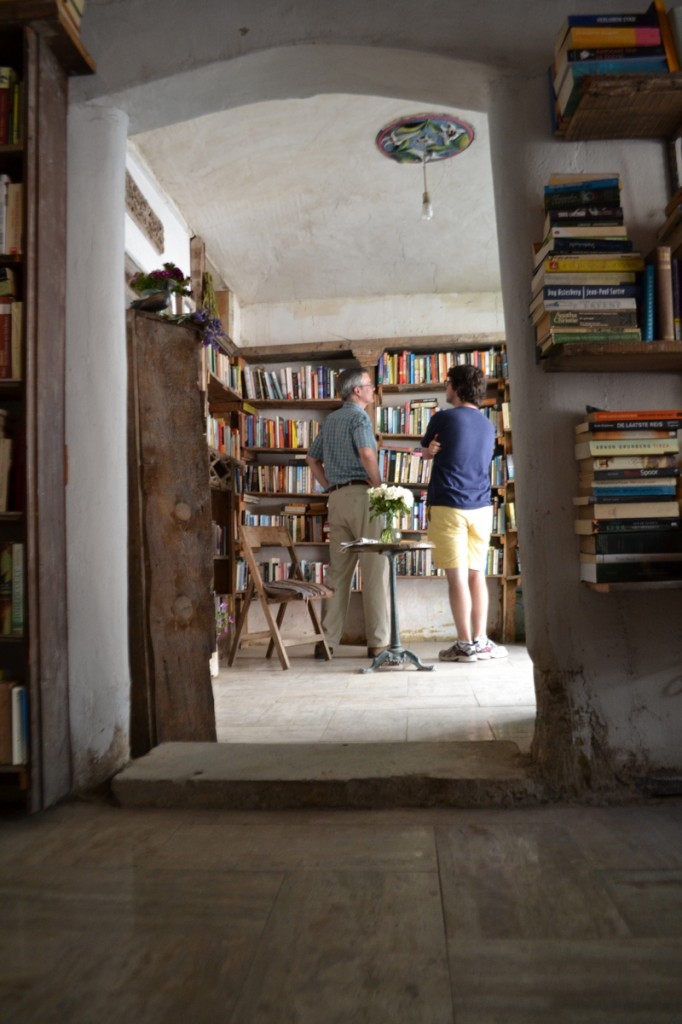