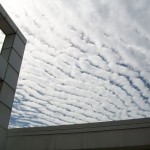 Its body barely houses a single pilot, but its wings stretch across an airport terminal. The man-powered craft, “Daedalus,” on display above the escalators, weds fragility, with its transparent plastic skin, to the strength implicit in its wingspan. It’s a feat of engineering – and its name suits it. The famous Icharus could fly, but his father, Daedalus, built him his wings. Plus, Daedalus understood the properties of the building materials better, and so refrained from pushing them past the point of failure. No wonder the modern-day engineers chose his name for their work.

Observing the mini-plane elevated my spirits beyond the gloom I felt at leaving my family behind. As great as my desire to travel is, I always cry when I say good-bye to them. They are the other four-fifths of my apple.

So, there I was, an airport orphan in line for security, when the Lord sent me a foster dad. This kind gentleman pointed out to me that I carried a full water bottle. I ducked out of line with my contraband, and then, for lack of a better solution, I chugged it. My friend motioned me back to my place in line in front of him. Blessings on him for saving me great discomfiture, at the very least.

As we parted to strip off our shoes and present ourselves to the TSA, he commented to me, “Gone are the days of running through the airport.”

I had arrived with hours to spare, but I felt his point nonetheless. Showing up with luggage and hopping onto a plane is a long, arduous process these days. I’ve found only one way to cope, and that is an attitude of sincere courtesy. Big, genuine smiles tend to elicit smiles in return – the gift that gives back. 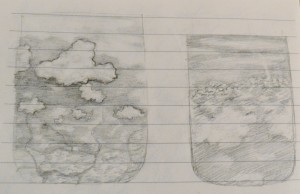 From my airplane window

That strategy saw me smoothly onto my first flight. Take-off thrilled me. My oil painting professor coached us last spring on reproducing the pale, softening of “atmospheric perspective” on distant land forms. Now I watched in awe as that effect crept inward until it masked all the earth in hazy blue. Parking lots became rows of glittering bracelets. Neighborhoods shrank into mosaic patterns. I never tire of these changes in perspective. After we cleared 10,000 feet, I whiled away an hour attempting to draw the magnificent clouds skating past my window.

Rachel brought me a scarf from her trip to turkey! That’s an airplane model behind us.

My friend, Rachel, and I arrived at our gate within minutes of each other. We switched almost immediately to speaking Spanish. It took a few passes to knock the rust off our grammar, and we both discovered more than a few holes in our airport-specific vocabulary. Still, it felt good to catch up, unhindered by our language of choice.

Let me insert a public service announcement here: All the luxuries I ever associated with airplanes take place on international flights. We waited for some three hours for our layover flight, but once we managed to board, we sat down to blankets, pillows, complimentary ear buds, plus a sandwich with chips and dessert on our 4.5 hour flight. The individual back-of-the-seat screens have evolved into mini-theaters. Mine offered at least a dozen movies, available in multiple languages, scores of hit music in a range of genres, and even more games and features that I never investigated. Meanwhile, outside, God was conducting a different sort of performance. Rachel and I marveled at a cloud bank streaked with sunset tints, then speckled with distant bursts of lightning as we passed into the night, and finally overwhelmed by the city of Quito, stretched out like a glittering lizard against the black earth. 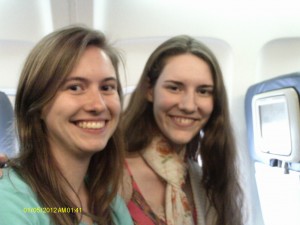 Thanks to everyone for your prayers, and to the Lord for hearing them, because touch-down came without a hiccup, and we scooted through customs likewise. We also located our luggage painlessly. 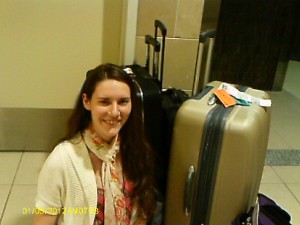 Suitcases in hand, Rachel and I emerged into a mass of family, friends, and taxi services awaiting us “inmigrants.” Thankfully, our contact stood out from the crowd – by about six inches. He and his charming daughter, an eight-year-old who laughs whenever she smiles, and smiles whenever she meets your eye, welcomed us as family might.

That brings me back to Daedalus, the brilliant inventor whose efforts cost him his son. He ended his voyage alone and despondent, his success hollowed by grief. Though his namesake inspired me, it’s a relief that my experience with flying bore little resemblance to how the Greeks imagined it.