Our first Sunday afternoon in Ecuador reflected the pace of life there — for the missionary family at least.

After our early morning dining and outings, we relaxed with the kids, welcomed the new guests, packed up for camp, and detoured to the beach on the way.  At times like these, Kevin and Beka often can’t confirm our plans until days or even hours beforehand.  Living life with them requires a flexibility and calmness comparable to a weather vane’s: ever pivoting, ever erect.

This particular day, the breezes blew fast but fair. 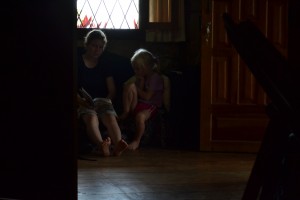 Rachel satisfied Evie’s attention with stories, instead of dolls

First, the kids impressed me with their ability to entertain themselves away from a computer screen.  Tessa, for instance, produces pages of ink horses and riders (often her sister, herself, and their puppy, Jerry).  Evie petitioned us to play Barbies with her, which I attempted, but I’m afraid we both lacked a clear idea of what “playing Barbies” meant.

Next, Tim, Jim, Milan, Dave, and Asa (Milan’s son) arrived in time from Quito to feast on tacos with us.  They represented Global Baseball, “an international evangelistic baseball organization.”  For the next week, they would coach not only Kevin’s team in Archidona, but also a new program in the neighboring canton, Tena.  They all loved baseball, as Jim explained later, but they had traveled to Ecuador because they loved Christ.

The afternoon exploded when the coaches unveiled their load of new baseball gear.  They had carted bats, helmets, gloves, balls, and more across continents as a gift to La Cruz del Sur (“Southern Cross”), Kevin and Beka’s baseball club.  (In Ecuador, kids play sports in neighborhood clubs rather than on school teams.  Whatever the other advantages of the system may be, it at least allows Ezra and Joe to play soccer without complications from being home-schooled.) 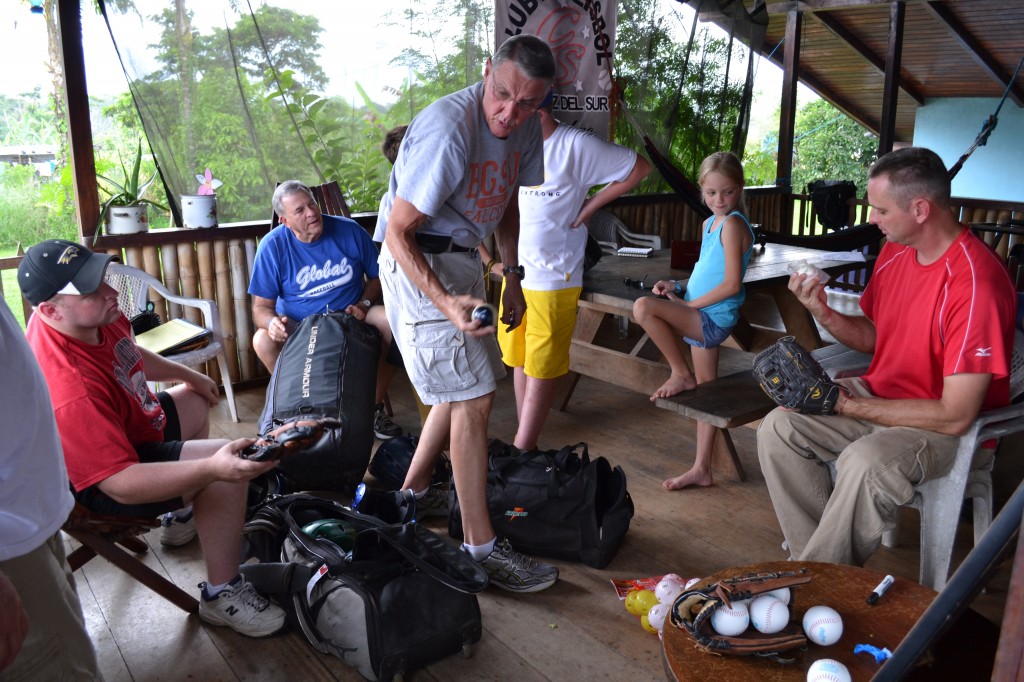 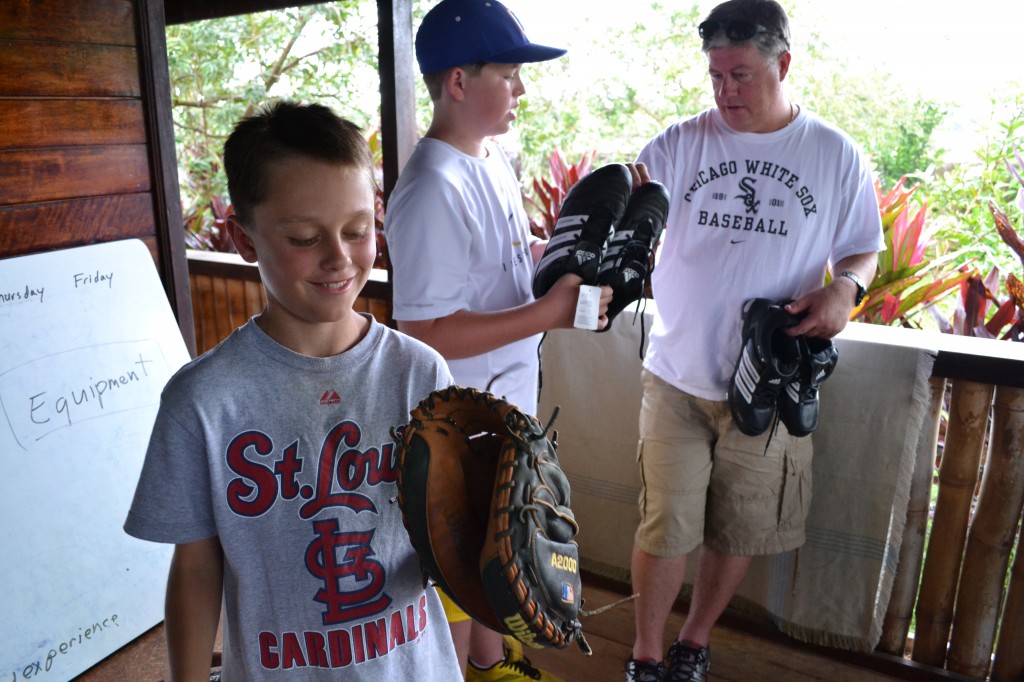 Behind Ezra, Asa and his dad, Milan 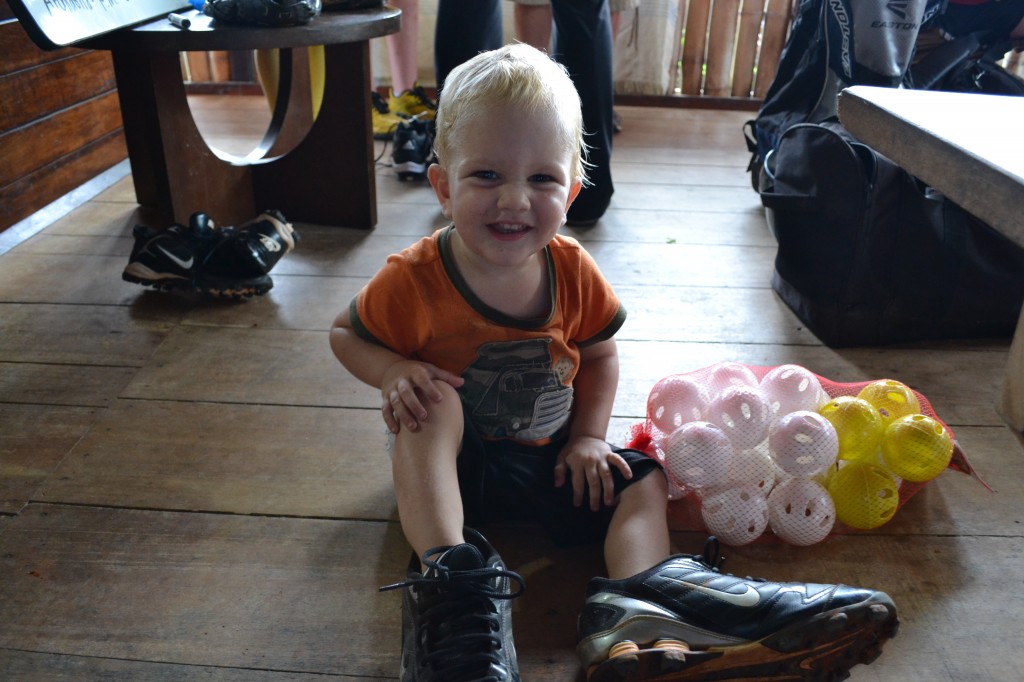 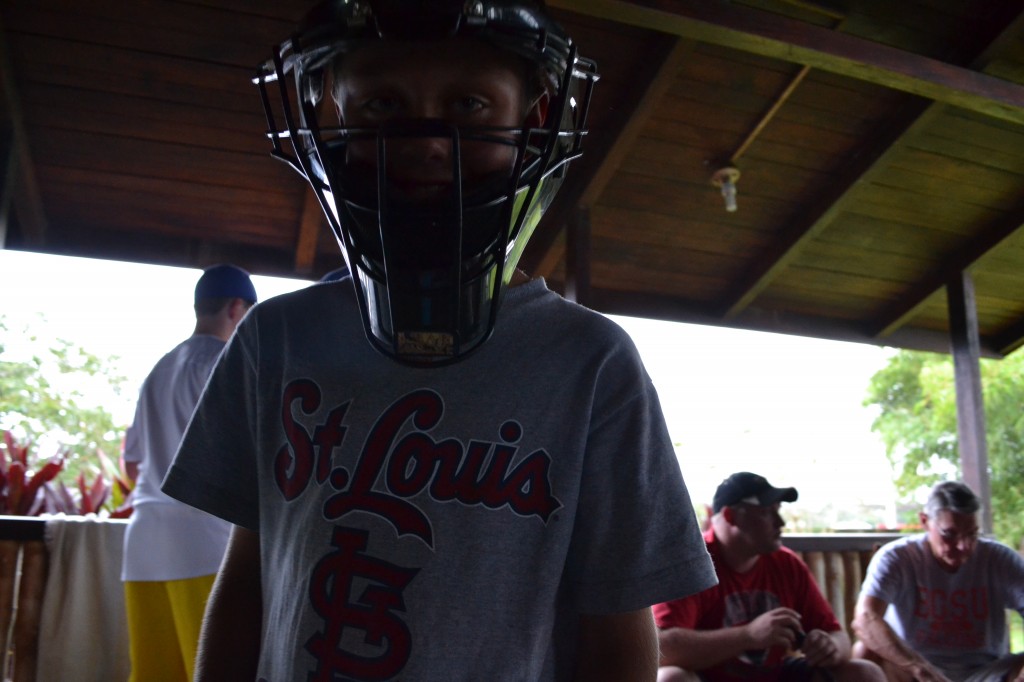 Ezra, or the Monster from the Baseball Field 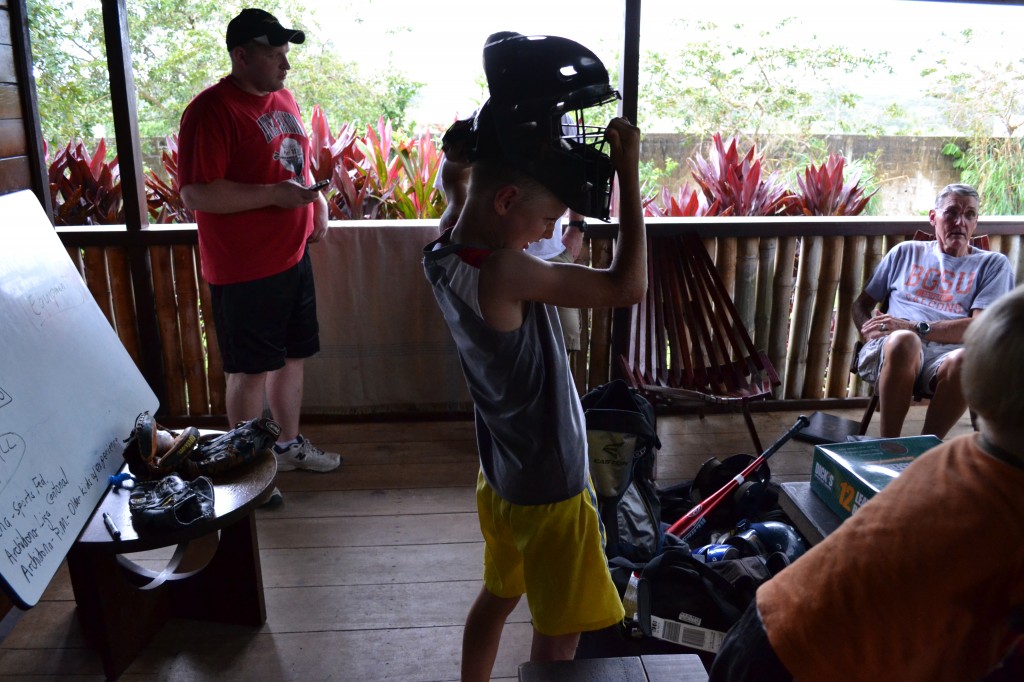 The catcher’s mask attracted the most attention 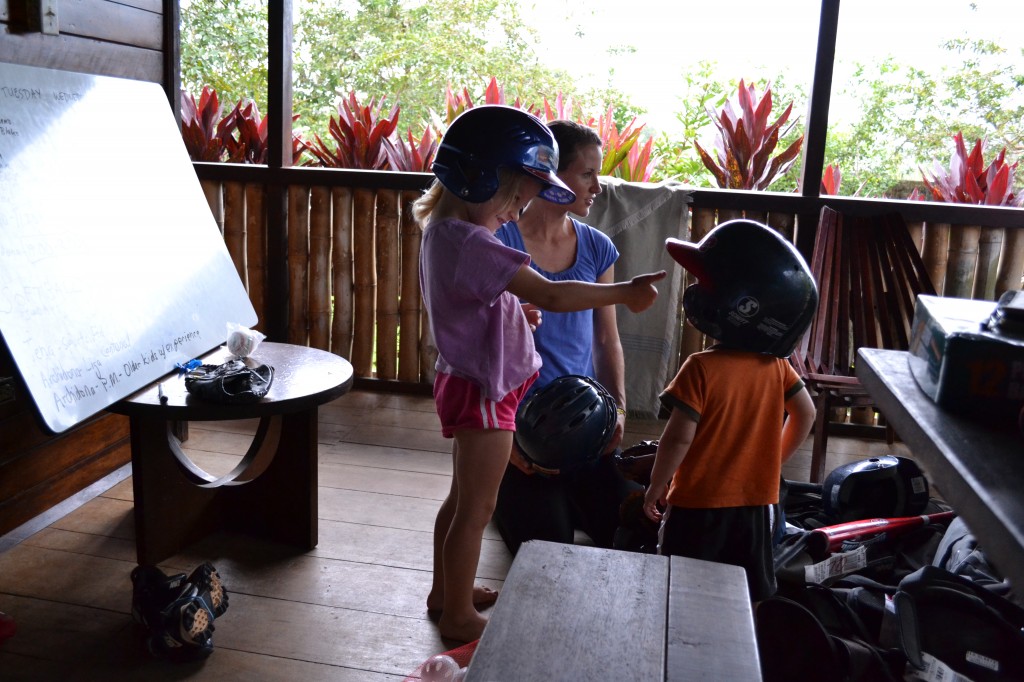 All too soon, Rachel and I left the party and packed our bags.  Beka and Kevin had arranged for us to spend some unspecified amount of time at Camp Unpes, a church campsite in the mountains.  They guessed we would help translate for the American volunteers there.  Beyond that… Rachel and I would surrender ourselves to the Lord’s sovereignty, trusting Him and the camp staff to find work for us.

When we arrived, however, we couldn’t locate the pastor who had agreed to hire and shelter us for the week.  Kevin and Beka shrugged, conferred, and ushered everyone back into the van.

Detour!  We burned an hour in Misuahalli, a nearby town known for its monkeys… and beaches. 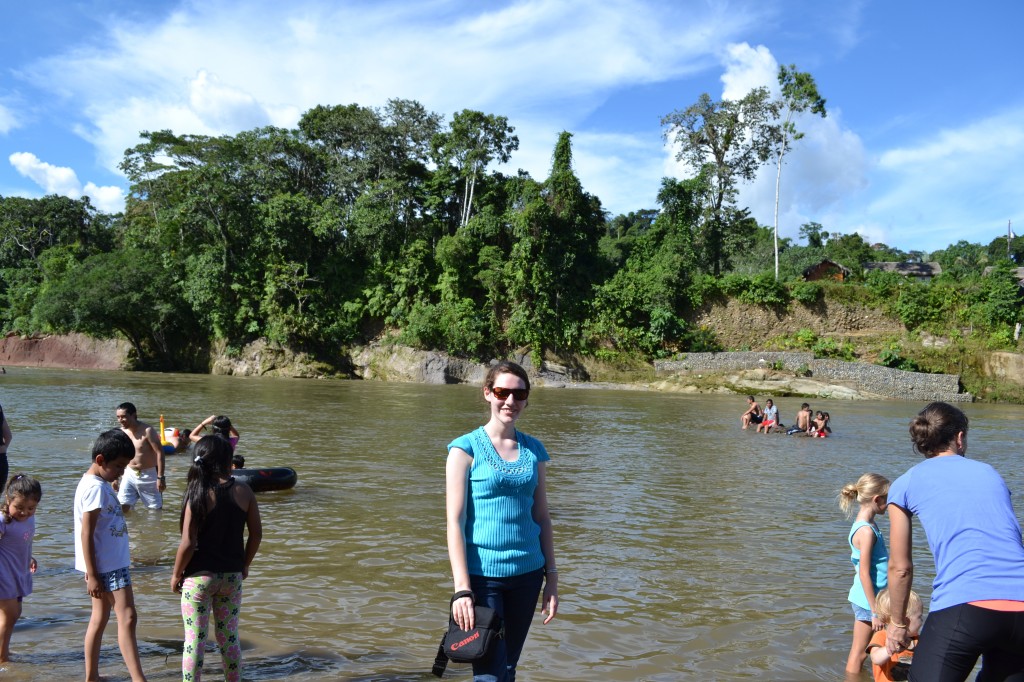 We waded along the shore 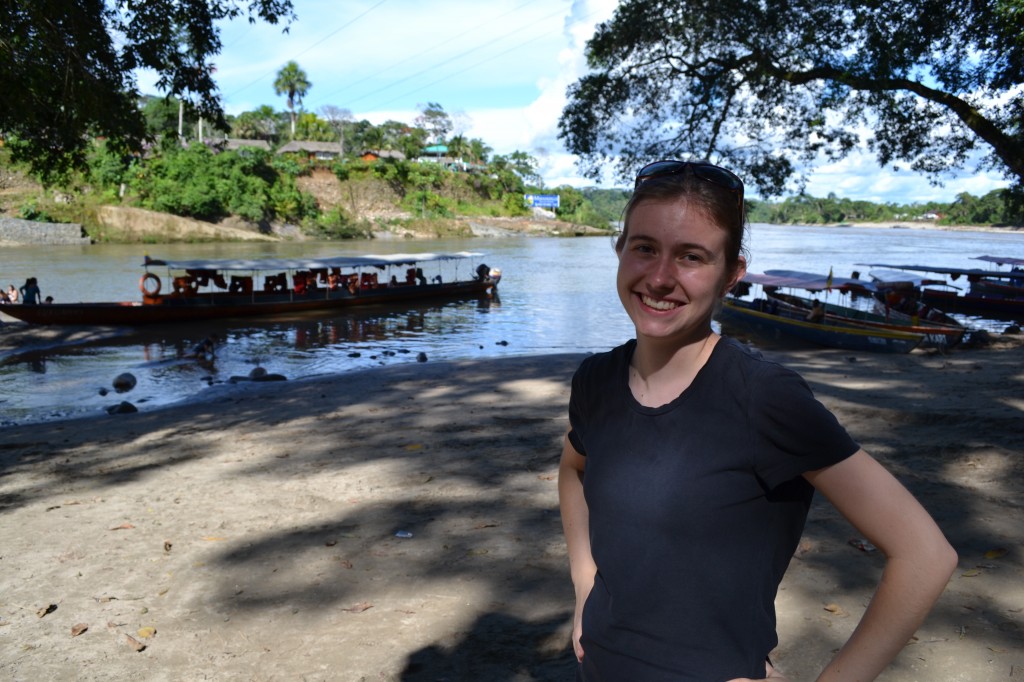 This river belongs to the Amazon 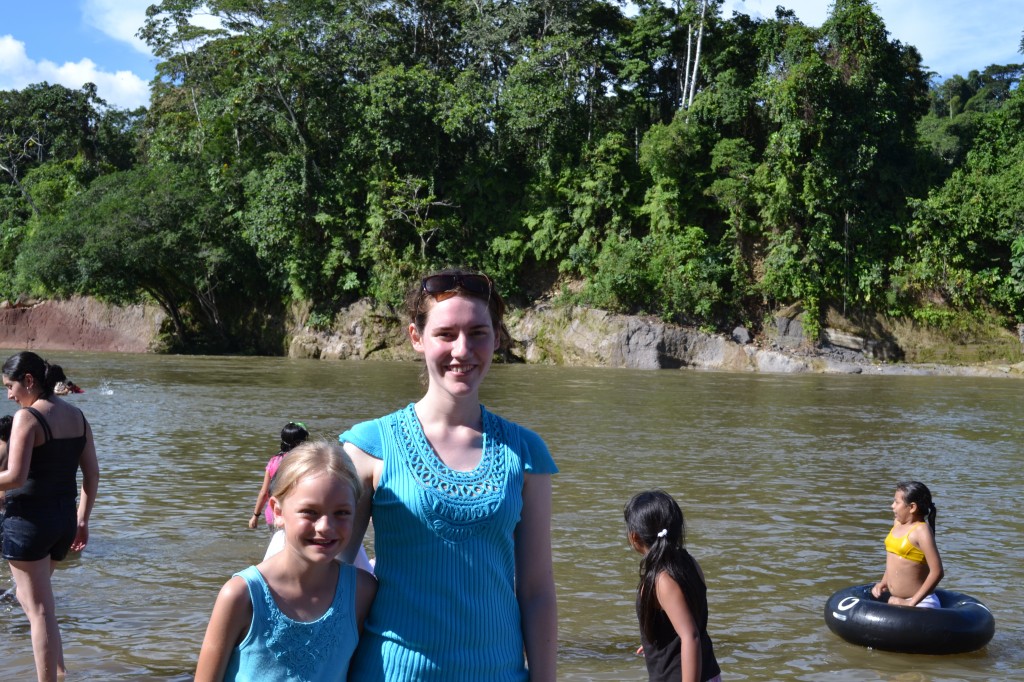 Tessa and me: We’re twins! –give or take a couple of years, height, hair, and eye color 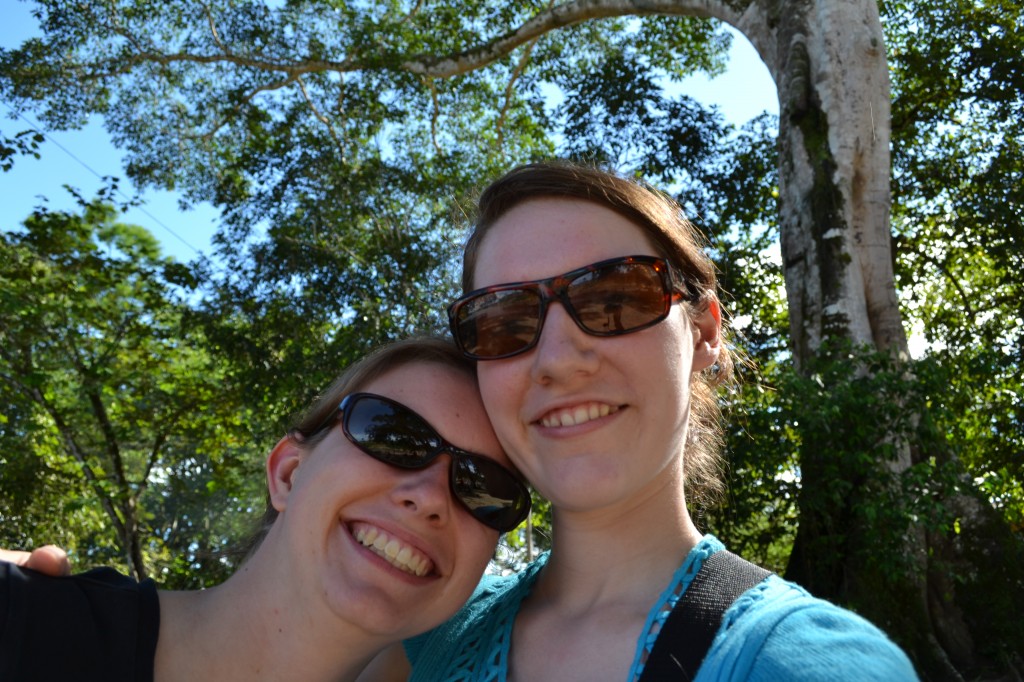 Rachel, and me, but no monkeys

The monkeys evaded us, so we settled for fortifying ourselves for our next adventure with sugared empanadas (in this case, fried dough, no filling).

Upon re-reading this sentence, I realize that it implies that we hoped to dine on monkey.  I don’t think that was the case, but one never knows in Ecuador.